The Journey is the Destination: On the Maysles Documentary Center Production, In Transit 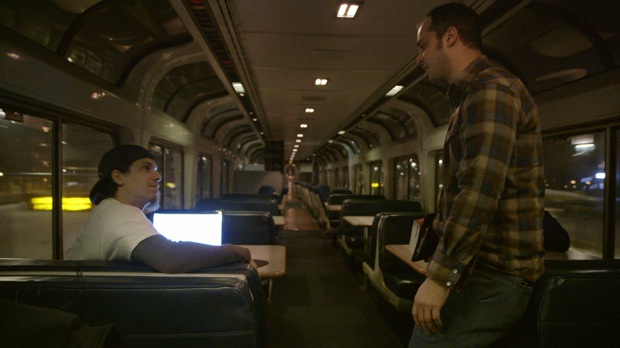 Opening tomorrow at New York’s Metrograph and the Maysles Documentary Center is In Transit, about Amtrak’s long-distance passenger train, the Empire Builder. It was legendary Direct Cinema pioneer Albert Maysles’s final directing credit, a collaboration with young directors Lynn True, Nelson Walker, Ben Wu and David Isui. Below, from our Spring, 2015 print issue, is Paul Dallas’s report on the film.

An attractive, middle-aged woman sits isolated against a snowy landscape that sweeps by. Her eyes are bright and sad. “I’ve always been a wife, a mother, somebody’s daughter, somebody’s something,” she explains. “But it didn’t matter. I was just me on the train. I’d just walk up to someone and say, ‘Where you goin’?’ That started some pretty great conversation.”

It’s a sentiment that could easily serve as the central thesis of In Transit, a film that reminds us that every story, both in life and onscreen begins in medias res.

In Transit, which premiered at the 2015 Tribeca Film Festival, is in many ways an appropriate capstone to Maysles’ legendary career — one defined by on-the-ground reportage, impassioned social engagement and clear-eyed optimism. Like many of the films he produced during his lifetime, In Transit is a collaborative project. The film was co-directed by a group of accomplished young documentary filmmakers including Nelson Walker and Lynn True (Summer Pasture), and David Usui and Ben Wu of Lost & Found Films.

Taking place almost exclusively on Amtrak’s Empire Builder train, which connects Chicago to Seattle and Portland, In Transit is composed of a series of poignant and vivid vignettes with passengers. Some characters we meet only once, such as the middle-aged woman whom we spend all of 90 seconds with. Others, like the older Marine Corps veteran with the camera and the young African-American woman, pregnant and three days overdue, we return to several times. Their friendship, encouraged by the confines of the train, gives the film its narrative spine.

The woman’s condition lends the film some narrative suspense, as well as its most humorous moment. The filmmakers capture the good-natured Amtrak employees discussing the prospect of a train birth during their break. “I got a cup of hot water and some towels. We can do this!” says one woman.

In Transit was produced in one year, beginning in December 2013. However, the project originates from a long-held dream of Maysles’ to make a film about long-distance train travelers. He often recalled an early memory of leaving his parents on the platform as his train, filled with fellow recruits headed to serve in World War II, departed. In subsequent years, as he traveled extensively, he often filmed people along the way, accumulating an archive of fragmentary encounters.

“He would describe the train as a magical place where, suspended between stations, people could find common ground with complete strangers,” explains Walker, who first met Maysles in 1999. “There is an atmosphere particular to long-distance trains that encourages us to be simultaneously both introspective and extroverted.”

It’s a condition that In Transit captures beautifully in the intimate interviews and candid exchanges between passengers. We see the train, as both a microcosm of contemporary America, where class and economic divisions are revealed, and as a place of personal refuge and self-actualization for individual travelers at turning points in their lives.

Aside from the technical difficulties of shooting for days on a crowded, moving train, the filmmakers’ main challenge was to find passengers and establish intimate connections within short periods of time. Producer Martha Wollner assisted with what amounted to on-site casting. While the cameras were being set up, she walked train cars taking notes on which passengers to approach and often making initial contact. The four d.p.s covered different areas of the train and were also free to respond to what they felt was worth capturing.

Maysles, camera in hand, accompanied his co-directors on two of the three round-trip journeys it took to make In Transit. His effortless ability to make people feel comfortable served as a model for his collaborators. As Usui recalls, “It impressed me every time I was with him. With nothing more than a quick hello, everyone just opened up their lives to him.”

Walker, who also worked on The Gates (2007), considers Maysles a mentor. “What I learned from Albert,” he explains, “was not how to manipulate a camera, but how to be with people and to capture that through the lens.” Camerawork is, above all, about “having a poetic eye and a love for one’s subjects.”

With more than 400 hours of footage, finding the film’s structure proved challenging. This was complicated by the linearity imposed by train travel, and the fact that many of stories of In Transit occur at different junctures along the trip, making strict continuity impossible.

True, who edited the film, wanted viewers to be “captivated by what the characters are sharing.” She eventually devised a loose three-act structure by imagining herself as a passenger and the film as a single three-day journey. She selected and organized stories according to a temporal-emotional, rather than spatial-geographic, logic. In the first section, passengers are beginning their trips and looking ahead. Many of these stories focus on hopes for the future, whereas in the second section, the passengers have settled in and the mood is more reflective as they open up about their past. The final section is about passengers facing the end of the journey and confronting the immediate present.

Toward the end of In Transit, we discover that the Marine vet is taking his final cross-country trip. “Maybe I don’t want to die without having a good look at the world,” he suggests. “My family asked me what I wanted to do, and I said ‘Take one more train ride.’ I know I’ll never be out here again. It’s been a good trip.” Maysles would surely have agreed.