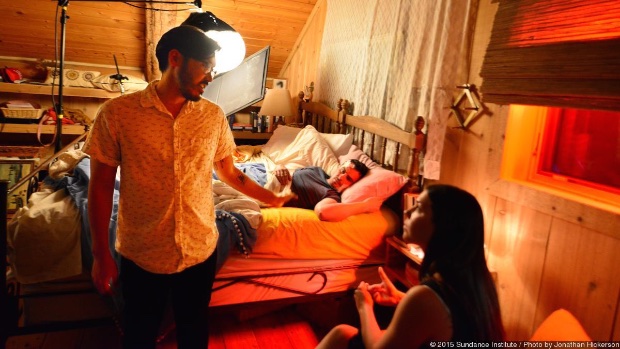 Christopher Makoto Yogi on set at the Directors Lab

Hawai’i-born director Christopher Makoto Yogi is at the Sundance Directors Lab with his feature, I Was a Simple Man. “Like marionettes on a toy stage, the ghosts of Seiichi’s past haunt the countryside in this tale of a Hawai’i family facing the imminent death of their eldest,” is how its described by the Sundance Institute. Below, Yoti describes leaving the Labs and finding quiet time — but missing the experience. Read Part One of Yogi’s diary here.

The final night of the Directors and Screenwriters Labs went something like this: fellows, advisors and staff roved up to a mountain house that afforded us a panoramic view of the Stewart Falls waterfall. One by one, each fellow tossed our script into a fire then sucked down a shot of mezcal. We laughed, ate, drank, hugs were given, weepy thank yous received, then a slow dispersion down the mountain, out of Utah, and now it’s just me alone at a computer in this New York City heat.

I am not an especially talkative person, and so I’d been looking forward to the solitude. But now that I’m in it all I want to do is call up the other fellows and chat. Chat about movies, relationships, the journey, and ask them if they too feel like the whole thing was a hallucinatory dream. Because although I’ve learned a lot about filmmaking this past month, it is the conversations and the brief moments of connection that will stay with me moving forward.

My film is about death in Hawaii. Because of this, most of my Screenwriters Lab meetings quickly moved from talk about the script into the sharing of our own personal stories of death, loss, and the unsaid. I found myself sharing in a way I rarely do with even my closest friends. The advisors’ personal stories were deeply moving and in these brief moments of connection, I realized that this is why I had written the script. I had written it because I was trying to reach out to others. And in making this film I am trying to bring people together around a common yet supremely personal experience: death. Of course it’s the beautiful moments in life that allow one to speak honestly about death. In sharing their own stories of loss with me, the advisors gave me the courage to share my story with the world.

Beyond the many deeply moving conversations with advisors and fellows, I think about how the Sundance Institute has created and refined something invaluable out there in Utah: a place where filmmakers can play. And I don’t just mean have fun (although there is a lot of fun to be had), but a place to experiment and find the play in our own work. The labs mantra is that it is “a safe place to fail,” but really it is also “a safe place to play.” The permission to have fun, be fun, and in finding that fun we all in our own way discover some kind of magic.

So next up, I go home to Hawaii and I write and I develop. With me I bring the generosity and openness of the labs. I bring the personal stories I’ve been gifted. I bring the moments of connection that saturate me and by extension my film with the awe, the wonder, and the enormous heart of those Utah mountains.