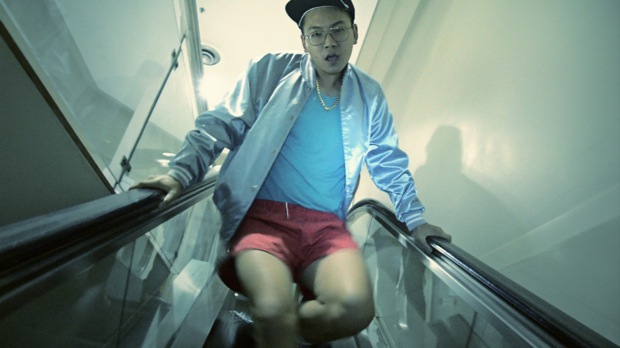 ManChyna's "Chinese Up Them Eyes Like Beyoncé" video, from the "Bad Asians Pt. 1 - 3" program

Between fighting for real estate and fighting for an audience, it can be hard pulling off a successful film series in New York. Independent programmers can’t be blamed for relying on the lure of unconventional spaces to draw distracted filmgoers. While it’s fun to see a film on a rooftop or a pier, these spaces often serve as exciting backdrops for otherwise conventional content. Few film series actively exploit the connections between site and content to say something meaningful about the spaces around us.

That’s what makes On Location different. This ambitious month-long series of “queer interventions” (the schedule can be found here) takes site-specificity to the next level. Utilizing a wide range of LGBT social and cultural spaces in Manhattan, Brooklyn and The Bronx, the project calls our attention to the history around us, and the relationship between community and context. Bars, parks, shuttered bathhouses and sex clubs, cinemas, galleries, and even the New York Public Library all become part of a network of spaces defining a queer geography.

On Location began in 2012 when Nordeen hustled a crew of young curators (this writer included) and ran a successful Kickstarter campaign to help cover basic rental and screening fees. Now a bi-annual event in its third edition, On Location looks all grown up, boasting an impressive roster of partner institutions and underwriting by none other than the popular gay hook-up app Scruff.

Filmmaker sat down with the project’s ringmaster to talk about bringing the map to life and queer programming in the age of Looking.

Filmmaker: The line-up is a rogue’s gallery of queer voices. Tell us about one or two programs that you’re especially excited about.

Nordeen: It’s cliché but this year, I’m having a hard time answering that question! I’m nerding out over our 35mm screening of The Doom Generation at Anthology Film Archives on July 23 because it’s one of my favorites — and I think it’s a completely misunderstood movie. Plus, we’ll have Rose McGowan there to speak about it!

Programmatically, I love how certain events feel interconnected in their approach towards urban historical moments — like how our John Sex program at The Pyramid Club (July 26), or our Clit Club reactivation at Participant Inc. (July 29) are positioned alongside the revival of Bathsalts (July 27), a weekly drag night that just closed up shop a month ago. People from the Pyramid or Clit Club did go to Bathsalts, so it shows history as horizontal, something that just keeps feeding back into the city instead of something that operates for a moment and then, you know… stops. I’m also really thrilled to showcase shorts programs that politicize what it’s like to live in the city with a myriad of cultural perspectives, like the two-part “Bad Asians Pt. 1 – 3,” “Misadventures in Black Dyke Dating in the 90s” or “The Practice of Everyday Freedom.” We just had an amazing, completely packed screening at Maysles on July 6 that felt so charged and so unlike anything Dirty Looks has ever done before.

Filmmaker: With each edition, On Location “extends” the queer map by folding in new venues and spreading out into new parts of the city. This year, you’re holding screenings in the Bronx and Red Hook for the first time. Will the series eventually include all five boroughs? Does Staten Island have a secret queer history waiting to be revealed?

Nordeen: I don’t think that we consciously try to push it farther each year — nor do we try to reign it in. I always aim to include the five boroughs! The program is created from a proposal process and I was really excited to see interventions in The Bronx at BAAD!, the artist-founded Pioneer Works in Red Hook, and at the Museum of Contemporary African Diasporan Arts in Brooklyn. There are queer histories everywhere and it’s important to include curators who can engage a multiplicity of sites, who come from differing geographic backgrounds — ’cause the queerest thing I know of Staten Island are the murmurs of delight “Let the River Run” stirs in me when Melanie Griffith is looking secretarial on the ferry…

Filmmaker: On Location is a group effort. You’ve rallied a crew of impressive young curators to help program a month’s worth of screenings. How did you select them, and what do they bring to the project?

Nordeen: Several of the contributors have been involved since the start, like Theodore Kerr or Leeroy Kun Young Kang. Others were referred to us by past collaborators, like Vivian Crockett or Carmel Curti. Some were running projects that we admired from afar, like David Evans Frantz at ONE Archives, Jordan Tannahill and William Ellis who run Videofag in Toronto, and Evan Garza of Fire Island Artist’s Residency. These contributors are On Location. They extend the scope of its vision and make the project something much bigger, like a city. This is important. After the first year, Lia Gangitano, who runs the alternative arts space Participant Inc., turned to me and said that On Location “made Dirty Looks grow up into an actual organization, in lieu of a singular curatorial perspective.” With emerging curators looking at the city, celebrating its present and fantasizing its past, we are making something new. It’s a blend of historical recognition and collective re-envisioning.

Filmmaker: Dirty Looks has used social media in savvy ways both for promotional purposes and as a platform for presenting content. This year, a few On Location events happen virtually on Instagram and X-Tube. What can you tell us about this change?

Nordeen: On Location is about shared social space and the city. Well, the Internet is about as social as it gets now, and I think it’s crucial to recognize this. I’m actually kind of a luddite IRL, but I came to really enjoy Instagram running the Dirty Looks account. It’s probably about 75% Dirty Looks and 25% me. That never happened for me with Twitter. I think Instagram presents its own distinct kind of visual culture. When you’re doing 31 consecutive events like On Location, sometimes tricky situations arise like, “What do we do on July 4th?” Well, Instagram created a network where everyone could encounter Dynasty Handbag’s “You’re a Grand Old Fag” while barbecuing on a rooftop or upstate somewhere.

Filmmaker: As a curator, what’s at stake programming queer content today? If gays can marry and Amazon is producing Transparent, what’s the next frontier?

Nordeen: I feel like a lot has changed but also a lot hasn’t, politically. When I was in high school, my options were Queer As Folk US or John Waters and Gregg Araki movies. I picked the low road! With marriage equality, there’s this sense that people aren’t going to be looking at queerness as an element creating community, at least on a mainstream level. And that is something that Dirty Looks fervently works to refute. There is a series of queer semiotics or strategies that we’re working from as practitioners and as spectators — and still, they’re myriad. It’s important to acknowledge them, understand and share them so that we don’t all just end up watching Queer As Folk or Looking.