For Cinematographers: A Chart To Quickly Set Hyper-Focal Distances on Digital Cameras 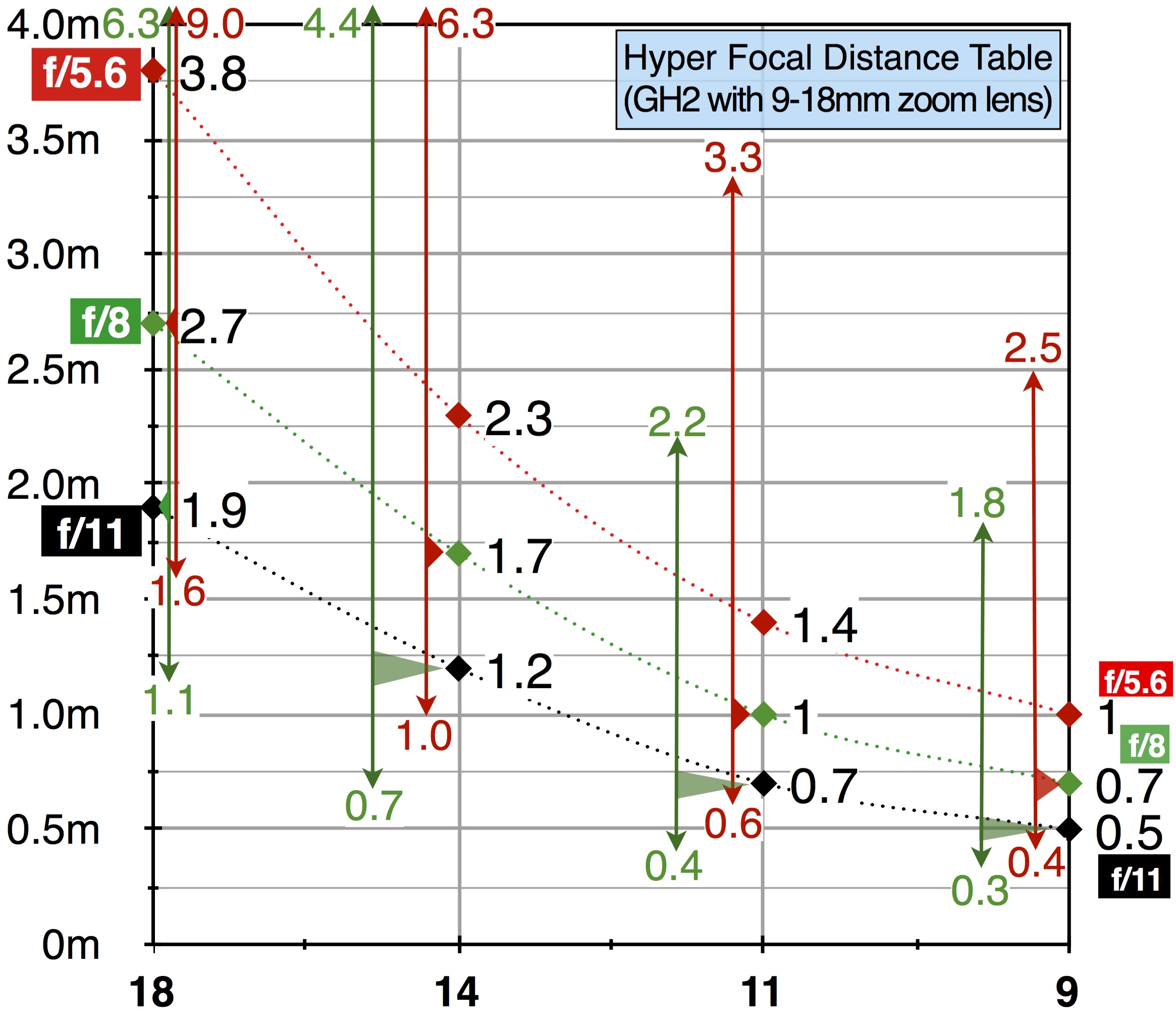 by Vadim Rizov
in Cinematography, Filmmaking
on Aug 27, 2015

Earlier this week, I posted my interview with The Creation of Meaning director Simone Rapisarda Casanova, in which he mentioned a solution he came up with to save time on finding hyper-focal distances:

I decided to use micro-four-thirds lenses from Panasonic and Olympus. They’re really small, the only drawback is manually focusing with them as they’re really made for auto-focus. I mostly shot in hyper-focal to keep the biggest depth-of-field possible. The marks on those lenses are kind of useless if you shoot like this, because then you have to have your smartphone to calculate the right hyper-focal distance every time. So I spent some time making a nice graphic that I print and stuck on the back of the camera, and that allowed me, every time I turned the camera on, to nail the hyper-focal distance in just a couple of seconds. This allowed me to be very fast. That’s where my scientist background rescued me.

After I published the interview, Casanova emailed me with the chart and this explanation. If you’re a DP, this may be useful. Click here for a full-size version.

The numbers on the horizontal axis are the focal length marked on my zoom lens of choice (a 9-18mm with marks also at 11mm and 14mm). On the vertical axis you can find the camera to focus-plane distance in meters. The dotted lines represent the hyper-focal distances, the red one is for the f/5.6 aperture, the green one is for  f/8, and the black one is for f/11. So, let’s say for instance that I have a nice framing with the focal length on the zoom set at 14mm. Then the graph tells me that at f/11 the HFD is at 1.2 meters, at f/8 it’s at 1.7 meters and at f/5.6 it’s at 2.3 meters. The red and green vertical lines are only to be used in the worst case scenarios in which there’s not enough light to stop down to get the desired HFD, so they tell you what kind of depth of field to expect at other less-optimal pairings of distance and aperture. To fully take advantage of the info in the chart I made marks with a sharpie on the bottom of the camera display that corresponded to the digital display marks regarding the lens being focused at each of the distances in the graph. I know that might sound complicated initially, but with a little exercise it’s an incredibly easy and fast way to manually obtain the HFD on modern large-sensor digital cameras.