“We Were Doing a Scene Without a Camera”: Five Questions for Mustang Director Deniz Gamze Ergüven 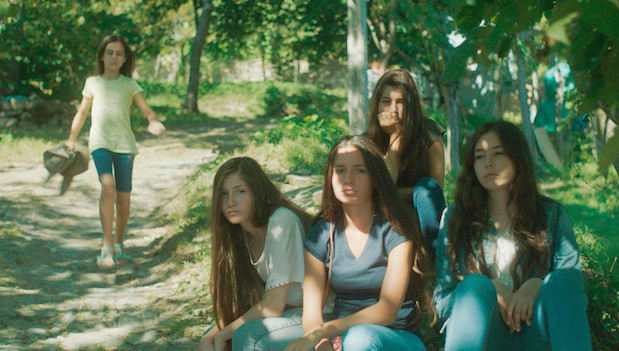 by Vadim Rizov
in Directors, Festivals & Events, Interviews
on Sep 15, 2015

The story of five young sisters locked up by overprotective guardians with predictably dire consequences, Deniz Gamze Ergüven’s first feature Mustang has prompted inevitable widespread comparisons to The Virgin Suicides. Despite the plot-level resemblance (Ergüven has said she’s both read the book and seen the movie but it’s not a meaningful influence), Mustang is its own distinctive debut, contextualized by a virulently patriarchal culture that barely disguises its controlling nature. After an afternoon frolic on the beach with male friends, five sisters arrive home to find themselves rigorously interrogated by their grandmother about what kind of sluttish hijinks they’ve been up to. In a scene resembling an alien sucking victims into a room, the girls are snatched from a hallway, one by one, to be beaten and castigated; the camera stays, in solidarity, on their side of the door, imagining the worst.

Under their uncle’s bullying, hymen-obsessed care, the girls are locked up, and their life becomes a “marriage factory,” as one says in voiceover. This factory has no exit: bars over the windows keep getting added as the surrounding walls grow higher and higher. There are momentary escapes when gaps in these ever-severe obstructions are exploited: expected to stew in their rooms all night and day, away from corrupting influences, it’s not hard for the often-alone girls to flee to an all-female-spectators soccer game. (A real event incorporated into the script, one with shades of Jafar Panahi’s Offside, another film in which a big soccer match provides a momentary relief valve from an overtly patriarchally controlling society.) In unexpected solidarity, their grandmother sabotages all the satellite feeds of the game lest drunk uncle and his mates see the girls screaming in crowd shots. The sisters continue to variously rebel, even though the slightest normal teen infraction gains extra potential-consequence weight from the relentless surveillance of nearly all neighbors, male and female, in the area. One of the sisters has sex with a young boy in the van while her uncle’s in the bank, with the car rocking back and forth. Even that tinted-window indiscretion has potentially deadly repercussions in a male society so obsessed with chastity that not once but twice in the film, the sisters are driven to a hospital to have the state of their virginity medically confirmed for the benefit of pistol-packing men.

Ergüven is remarkably tonally surefooted, navigating sections of remarkable peril and threat to the young women with a potentially flippant lightness of tone that emphasizes sisterly solidarity rather than social gloom (without mitigating the importance of the latter). The film floats in unexpected ways through its story, befitting Ergüven’s goal of making a film that steers away from grim naturalism and heads into the realm of the fairy tale. In Toronto for the North American premiere of her film, Ergüven spoke over the phone about the film.

Filmmaker: As with many smaller productions, there are a lot of production companies and financiers credited. How involved were you in pulling together the financing?

Ergüven: For a first feature film, you’re very, very much involved. It’s not meetings, it’s that you write a lot. I think I wrote the film in every possible format: as a script in three different languages, as a 50-page treatment, 20-page treatment, 10-page treatment, one-page synopsis, ten-page synopsis, with dialogue and without dialogue, in one sentence. Once in a while you have an oral presentation, but that was quite rare. It’s a very long process, plus there’s a chronology to those financial elements. You have to start off with public financing, because people need to have strong signals before they get involved in the film. I was very, very involved, and when [producer] Charles [Gillibert] took the film, I gave him the baby at that moment. I stopped being involved in production as much as I could. That was very important: I really wanted to withdraw from that as much as possible. Because I was the joint between Turkey, France and Germany, and the one holding everything together initially, three days before shooting a Turkish line company was asking me to discuss with the DP things like how many technicians they would have on the set. I would try to say “I am not involved with this.” I think that’s part of making a first feature film.

Filmmaker: Much of the film takes place in one house, and during the course of the story new walls and gating are built to keep the girls from the outside world. How did you approach finding angles to shoot in the house and did you have to plan your production around actual construction?

Ergüven: When we worked on the script, there was a long list of the needs we had for the house. We traveled for 1,000 kilometers along the entire Black Sea. Aesthetically, what I was trying to do was to move away as much as possible from any form of naturalism. We were scouting intensively and trying to find one that fit all these needs we had, that it be on top of a hill overlooking a road from which you could see different, specific POVs. We found two houses that were back to back, one of which was more modern than the other one, and we worked on the circulation within the house. The architecture had something of Psycho and German Expressionism, something eerie and not-naturalistic. I was trying to move away from a potentially gloomy reality.

During the shoot, the gating was a permanent preoccupation. There were not only the metal bars over the windows around the house, but walls getting higher and higher. So first we built the first wall, which was waist-high, and then there were fake walls that we could put up and down. With the windows, we could take the bars on and off. We tried to shoot in order, but it wasn’t possible. In the beginning, we thought that because of the evolution of the house we would have to, but because it was such a tight schedule, it wasn’t possible.

Filmmaker: How did you shoot the sequence where the girls attend the all-female-spectators soccer match?

Ergüven: The first match took place in 2011 and they took place for three years. It was obviously too rich a situation; as soon as I came across it, I knew I had to integrate it into the film. The story is really like a [fairy] tale, so the match is a bit like the ball all the girls dream of going to. It was supposed to be the climax of the film in terms of joy and pleasure. Initially, I wanted to shoot the entire scene during an actual game, but logistically it was extremely complicated, because games where men were banned were always announced at the last minute. A month and a half before the initial shoot, one of those games was announced. It was a period where I was going back to the US and everybody was traveling. So we gathered to shoot that scene, and a day before the match the Turkish producer said we were allowed to have our own cameras and shoot. But just before, they said, “No, there’s no way you can have your cameras or sound recording.” That was the most absurd shoot ever: we were doing a scene without a camera.

The stadium cameras were shooting the game, so during that day we only got the two shots where the grandmother sees the girls on television. The station knew we wanted images of girls in the stadium. In a soccer game you have, I don’t know, 18 cameras around the stadium, and there were always a few cameras on the girls. It was a real game, so they was broadcast on television. The girls were on there when there was a score and you see shots of the crowd. We took those images from the TV station and used those two shots.

Filmmaker: How did you go about shooting in hospitals in these small, conservative areas?

Ergüven: There are two different hospital scenes: the first when all of them are taken for the virginity test, the second one when Selma (Tugba Sunguroglu) is taken to the hospital in the middle of her wedding night. These were two hospitals — one big, one small — in the vicinity of where we were shooting. There were very few people who knew the content of the script, even inside our team. A few collaborators knew everything, but I wasn’t sharing everything with everyone. Even when we were shooting in film school in Paris, I didn’t appreciate sharing the content of the film with anyone for technical reasons. It’s just a question of privacy.

The region where we were is extremely conservative. For example, the scene where Ece (Elit İşcan) has sex in the car in front of the bank, the production team completely panicked about that. The location manager was completely freaked out. Nothing happened, and I was telling him “It’s all right, we’re just [being suggestive],” but when the actress was taking her clothes off, he almost had a heart attack. He was telling us “Nothing happened today, but you’ll see, there’ll be a rumor.” Nothing happened, but it was like, “Shoot your frame and run.”

Filmmaker: Given current turmoil in Turkey as you’re traveling to festivals with the film, do you feel any kind of obligation to speak on the situation?

Ergüven: Over the last eight days, from the Syrian children who drowned on the beach to the kind of attack that took place on Tuesday night — Turkey is a country that has layers and layers of trauma. In 2013, I had the impression that it was like some video game where the ground is falling out from beneath your feet, and you’re still jumping to grasp some banana from the air. There’s one regret that I guess most people doing cinema in Turkey feel, which is that the public institutions are directly linked to the government. The Ministry of Culture is in charge of financing the films. So each time there’s a little bit of turmoil in Turkish politics, like when there was no government for weeks, everything stands still. Whereas in other countries, where you have public institutions that support cinema, the organizations are public but not literally the government. That distance is something we could gain in Turkey. When things are going bad, it’s a moment where it’s very important to go on doing films. I think it’s important in the face of adversity to keep walking. For example, when the festivals were closing one after another or when people took out their films from the Istanbul Film Festival, I was thinking, “We have to show their films somewhere else.” We have to be active on the worst days. Right now, there is a general unsolved problem about the effect of political life on filmmakers, and I think there’s something we have to work on.