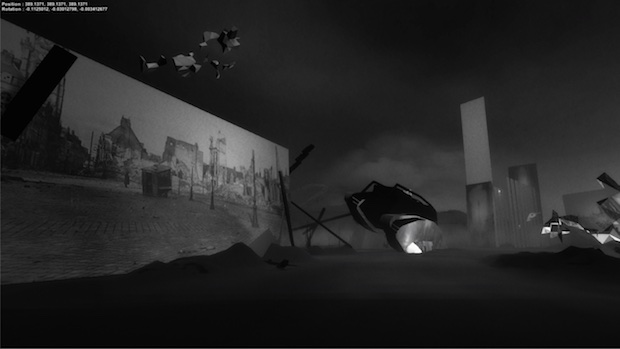 by Lauren Wissot
in Directors, Interviews, Sundance, Transmedia
on Jan 31, 2016

Receiving its U.S. premiere at the 2016 Sundance Film Festival in the New Frontier section is Loic Suty’s The Unknown Photographer, the sole work that blew my mind just a couple of months earlier at Montreal’s RIDM. It’s an incredible, immersive Oculus Rift project inspired by the discovery of a photo album in the Laurentians north of Montreal. Suty’s piece takes us on a WWI photographer’s journey both familiar and foreign, equal parts timely and timeless.

Filmmaker spoke with the Montreal-based “experience designer” prior to the piece’s Park City premiere.

Filmmaker: So I believe this project originated with an actual short documentary (Finding Fletcher Wade Moses), directed by the photographer who first inherited the album of un-credited WWI photos. How did the idea of turning this collection and its strange tale into a VR piece come about, and how did you become involved yourself?

Suty: A few years back, a friend of photographer Bertrand Carrière gave him a mysterious photo album that had been discovered in the 1970s, in an abandoned house in Morin Heights, north of Montreal. Imagine a bunch of kids out partying in the countryside late at night, and they go into this old house, obviously “haunted.” There they find a photo album from the First World War. One of the gang decides to save the album, and takes it with him.

It’s not until years later that he gives it to his friend, Bertrand Carrière, who makes it his personal quest to establish the identity of this enigmatic “unknown photographer.” For more than 10 years, he tries to find some trace of him, without ever learning for certain where he’d come from, where he’d gone, or who he was. Fletcher Wade Moses remains a mystery.

Based on Bertrand’s research, we decided to use that undecipherable aspect of Moses’ life story as a fundamental: to make it the central concept of our scenario and narration. So we invented a protean, ghostly narrator, whose psychological, artistic and biographical outlines are blurry, undefined. The experience is an imaginary, impossible walk through the photographer’s memories, with their multiple alternative paths branching off. We quickly came to describe our approach as a “surrealist museum.” The user is plunged into this poetic dreamscape, through which they advance freely, accompanied by the narrator’s voice. The immersive quality of VR works wonderfully with this “inner world” idea.

At the same time, so as not to lose sight of the original story, Bertrand Carrière was making the documentary Finding Fletcher Wade Moses, which chronicles the amazing personal and artistic journey he went through, seeking the truth about this cryptic photographer. Bertrand’s film is a totally different animal, but infinitely complementary to our VR experiments.

Filmmaker: What audiences do you hope to reach with the piece? It seems quite suited to photo galleries and historical museums, so I’m quite curious to hear about your distribution and outreach plans.

Suty: So far, the experience has been available at festivals. We’ve presented The Unknown Photographer at Power to the Pixel in London, at the RIDM in Montreal (a brilliant festival, where we were amazingly well received) and at the IDFA in Amsterdam. It’s also been selected for All Access Manitoba 2016 and Sundance 2016, as part of the 10th anniversary of New Frontier. And we expect more to be announced.

The audiences at these events are definitely an “in crowd” — people plugged into documentary cinema and/or experimental digital arts approaches. So thus far, we’re reaching more of those types of communities, but things are changing really fast. A number of museums have already expressed strong interest, and talks are underway with photography institutions and museums, as you mention. VR is still a rarefied medium, still very new for a lot of arts and culture venues. So things don’t move that quickly once you leave a certain circle made up of that “in crowd” plus the curious. But it’s only a matter of months before just about anybody will have tried out VR, and even has a headset at home.

And we’re not ruling out eventual web distribution. My sense is that today’s thirtysomething and fortysomething gamer generation would be comfortable with this kind of interactive doc product.

Filmmaker: I know the project is a coproduction between Turbulent and the NFB, but what exactly is Turbulent, and what is its involvement? Is this an all-in-one production house for VR? What role did the NFB play?

Suty: Turbulent is the company where I work as an interactive experience designer, copywriter and director. It was founded more than 10 years ago, and develops interactive products for the educational, entertainment and videogaming sectors. We’re a team of highly adaptable generalists. Branching out to VR was natural and very enjoyable for us, and the adventure is continuing. We’re developing new things for Oculus and Gear VR. We also have a concept for HTC Vive. Virtual Reality is the focus of quite a few upcoming projects for us, but it remains just one tool among a constellation of others.

The NFB is a partner like no other. From what I understand, they’d wanted to do something with the photo album for years. The project eventually wound up in their Interactive department, and that’s when they partnered with Turbulent, in 2013. Turbulent piloted this project right up to its implementation, both financially and conceptually, with support from the NFB throughout the entire process. The NFB/Interactive department is extremely interesting. There’s really no one in their ambit. Louis-Richard Tremblay and Hugues Sweeney are incredibly knowledgeable about all kinds of experimental digital techniques. Plus they’re fantastic to deal with, farsighted, demanding in a good way, and great listeners.

The NFB is also handling everything to do with media relations and distribution strategies, and they’ve done an effective job putting the project on the festival circuit, for the upcoming digital distribution, and so on. Having a partner of that scale means benefiting from their strengths in distribution, which in turn means you can take more risks.

Filmmaker: I’m a big fan of hybrid docs, so this piece had me excited from the get-go. Was the choice to add the fictional elements (including a WWI photographer as narrator guide) simply a way of contextualizing the mystery?

Suty: Yes, up to a point. But here, the fictional elements are more like buttons we push to get at the issue of the uncertainty of memory — in other words, of the archive. The “fuzzy” narration, combining multiple psychological and biographical possibilities, asks a real gnoseological question. Rather than contextualize the mystery, we’ve in fact made it stronger and more serious, to serve the documentary question carried by the fiction element.

It’s a new and exciting way of storytelling. You build a narration more out of varying intensities in the text, and a general structure, rather than specific events on which you can hang an actual story. The moment there’s some time-based development, you can have a storytelling structure that creates itself, even if there’s no story, per se. Like with music, but your structure can be visual, sound-based, etc. — it doesn’t matter. Catherine Mavrikakis, who wrote the texts, understood this immediately, the very first time she tested the Oculus headset. She’s a novelist, and an academic, but she grasped the literary potential of our VR approach in a flash. Meeting her was fantastic.

In the VR experience, the photographs from the album don’t serve to literally illustrate any particular event or speech; they have a paradoxical presence, at once ghostly and monumental, with multiple meanings. And they have no captions. A photo without a caption doesn’t say very much. It’s an open field of interpretation. Which is wonderful and catastrophic at the same time.

In the experience, the photos become a sort of medium whereby the narrator relives a very uncertain memory. They function more as the memory of a memory, distantly evoking this magma of diffuse sensations. The narrator keeps repeating that he’s not quite sure whether he took these pictures. His recollections are cloudy, indeterminate. It’s a frequent phenomenon: not knowing whether you’ve experienced precisely a given situation. There are cases of survivors who’ve told so many of their friends’ stories, to ensure that those friends’ memories live on, that they can no longer clearly distinguish between their own memories and those of others. It’s strange. And in a way, very beautiful.

The dynamic medium of VR enables us to relate and experience that indeterminacy with impressive power, and make it an aesthetic strength rather than a weakness. VR tends to focus the user’s attention so much on the visuals that the text almost merges with the ambient sound. But that doesn’t take anything away from the subject. From the beginning, it was very clear to Claire Buffet, the producer, that we would be addressing the topics of photography and war generally. The fact that our subject here is the Great War, in the end, isn’t that important. Likewise, the backstory of Fletcher Wade Moses isn’t central to the experience. Bertrand Carrière’s documentary brilliantly investigates that question, so there wasn’t any need to transpose his work into the interactive experience.

To me, the fiction elements in The Unknown Photographer serve a purpose of documentary investigation. It’s a sort of surrealist poetic journey, where the objective is to place the user in a certain state of mind that’s diametrically opposed to all the hero-building commemorations of war. I have enormous respect for veterans. But war is a monstrosity, which repeats itself in an utterly absurd way, and always will. Memory, archive, remembrance, documentation and the media we associate with them will all fade or disappear one day, but war — war as fact — will endure. As we say in the conclusion, war itself is eternal — absurd and eternal.

Filmmaker: The Turbulent site notes that this is one of the “first virtual reality (VR) works in the world to offer an immersive, 20-minute narrative and visual experience.” Yet the piece actually reminded me a bit of Oscar Raby’s Assent, an Oculus Rift project that played Sundance’s New Frontier section last year (and which likewise blew my mind). The VR community is still rather small, so I’m wondering if you communicate at all with one another.

Suty: The experience lasts at least 20 minutes, actually. Some people stay 30, 40, even 50 minutes with the headset. That’s quite long compared with the majority of existing experiences (including all of the cinematographic VR approaches) although you’re right, there are others.

Some of the Turbulent team had the chance to try Assent at the RIDM in 2014. I unfortunately wasn’t able to, but I definitely will soon. I’ve heard a lot of good things about the experience, and it seems as though our grammar has a lot of points in common. I’m very curious to see how Oscar Raby approached things. Events such as Sundance are a great way to see what is going on in a flourishing industry.