Cancer and Video Games: Malika Zouhali Worrall and David Osit on Thank You for Playing 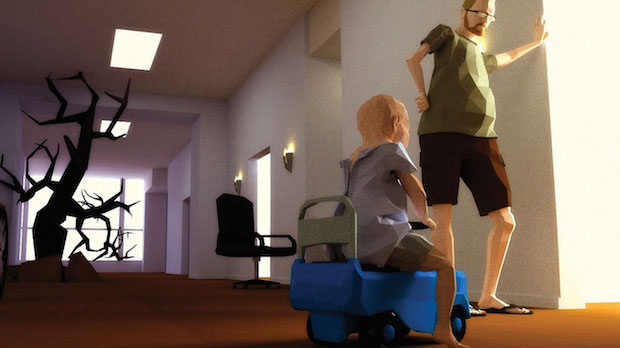 Thank You For Playing

by Erik Luers
in Directors, Filmmaking, Interviews
on Mar 18, 2016

A video gaming experience therapeutic for both players and its grief-stricken creator, That Dragon, Cancer can currently be purchased for use on your Mac/PC and other devices. Created by Colorado-based developer Ryan Green, the independent video game serves as a reflection of a tragedy he and his family recently experienced: the death of Green’s young son, Joel, who passed away after a sustained battle with cancer. Working on the project as Joel was receiving treatment, Ryan and his family incorporated very real moments of personal history into That Dragon, Cancer, even going as far as to sample Joel and his family’s actual voices at key points in the game.

An interactive 3D home movie intended to be consumed by others, That Dragon, Cancer (and its rigorous creation) are the subject of filmmakers Malika Zouhali-Worrall and David Osit’s new feature-length documentary Thank You For Playing. Spending time with the Green family as they were well into production on the game (and as Joel’s condition worsened), the filmmakers were granted access to a family dealing and coming to terms with a loved one’s transformation into a memory.

As Thank You For Playing opens today in the Screen Forward screening series at the Made in NY Media Center by IFP, I spoke with directors Malika Zouhali Worrall and David Osit about how they first heard about the Green family, the appropriate visual ways to incorporate video game footage into a narrative, and how to respectfully document someone going through an unimaginable struggle.

Filmmaker: How did you first hear about Ryan Green and his That Dragon, Cancer video game?

Osit: We read a brief description of Ryan’s game in Kill Screen, a gaming news site that tends to take an alternative angle to covering video game news. Just reading a few sentences about That Dragon, Cancer was very intriguing to us. We were curious to learn more about what the experience was like to encode such a deeply personal experience into a video game of all things, to create and share with others through an interactive medium. So we got in touch with Ryan and Amy Green, as well as Josh Larson, their co-creator on the video game.

Filmmaker: The film opens with a scene from That Dragon, Cancer, in which the father character, sitting in a hospital waiting room, is given some rather unfortunate news regarding his son’s condition. Suddenly, a torrential downpour engulfs the room and the water overtakes the characters. It’s a pretty strikingly surreal opening, and I’m wondering why you chose to begin your film in such a way.

Zouhali-Worrall: We wanted people to be in the space of the video game right away. That Dragon, Cancer is a beautiful game, but it’s also a beautiful work of art, replete with all sorts of magical realism and poetry. This is a video game about raising a child with cancer. Since the film is focused on how the Green family used a video game to mirror their real-life experience through an artfully-told story, we thought it was important to understand the emotional stakes right away.

Filmmaker: There’s a sequence in which Joel goes back to the hospital for treatment and we’re shown a display of painted handprints from other children who have received chemotherapy there. The camera lingers on the wall and it’s a silent moment filled with an emotional presence. There are tons of stories represented here, and you conclude the sequence with an extended shot of that wall. How did its poignancy speak to you and how did you come up with this way to express it cinematically?

Osit: There’s a moment in the film when Ryan reflects on a memory he had in the hospital with Joel, realizing that there were so many families going through the same thing he was, but that the other doors to patient rooms in the hospital were closed. In many ways, That Dragon, Cancer was the Green family’s way of opening their own door and inviting people inside their room. Filming that moment was a physical reminder of that reality, and since our focus in filming was just capturing the story of one family, we thought it was important to hint at the fact that just because the Green family happened to be making this unusual work of art, they were certainly not the only ones going through this experience. Interestingly, the Greens ended up also creating a digital version of that wall of hand prints in the virtual hospital they built in the video game. They invited other people who had been through similar experiences to share handprints and other memorials of terminally-ill and lost loved ones that could be included in the game, as a way of acknowledging how many other families have lived through this kind of thing.

Filmmaker: Given the extreme sensitivity of what the Green family was going through, did you ever need to remove yourself from their personal life? Were you based in Colorado during the shoot?

Zouhali-Worrall: We’re based in New York, so we would fly out to Colorado for filming. We’d always ask the Greens’ permission before we came out, as we were always afraid of being intrusive during a sensitive time, but they never said no. In fact, they never once asked us to turn the cameras off. That was our own decision to make. Their comfort level with us documenting them probably had a lot to do with the fact that they were already documenting their own lives in the video game, and allowing us to film with them was simply a continuation of their mission to share a difficult experience that is so rarely shared or discussed publicly. Our presence was really just another camera in a space already full of very deep self-introspection for the entire family during that time.

Filmmaker: Ryan speaks of the presence of God throughout the film, and he considers That Dragon, Cancer to be a Christian game. Was there ever a hesitation to include Ryan speaking about his faith or was that always a key factor in identifying who he was?

Zouhali-Worrall: Neither of us is particularly religious, but when we started speaking with the Greens, we were both immediately struck by the fact that we were not at all alienated by their discussions of their faith. We recognized that it was an important element of Ryan and Amy’s daily life, so we had to include it in the film. Ultimately, however, we were more interested in the role that art (rather than religion) played in Ryan and Amy’s life, and how they were using a relatively new medium to do what humans have done for centuries: explore and share their personal experiences through artistic creation.

Filmmaker: When That Dragon, Cancer debuts at a video game convention, the user response is extremely emotional. Tears run down their face as men and women become fully immersed in the game and Ryan stands off to the side. Your camera is also just off to the side. How were you able to capture those raw emotions from the users while they were in such an emotional and vulnerable state?

Osit: We filmed people playing the game through a gap in two pieces of fabric that were hung around the That Dragon, Cancer booth. This meant that our camera wasn’t really in anyone’s faces, which definitely would have been a big impediment to filming genuine reactions. After people would play the demo, we’d ask them for a personal release, and to our surprise, not a single person said no. We’re still a bit shocked by that.

Filmmaker: That sequence at the convention is also interesting because we briefly catch a glimpse of other video games (not related to Green’s work) that also focus on death, the difference being that many of those are first-person shooters, treating murder as a through line to instant gamer satisfaction. Did you ever see your film as being about video game culture and about both those who create and play them?

Zouhali-Worrall: Creatively, this was one of the most interesting and expressionistic scenes to edit, as we wanted to really bring the viewer into the chaotic and overwhelming atmosphere of that gaming conference in a way that reflected our own experience as observers. Up until that point, That Dragon, Cancer hadn’t been exhibited that frequently to the public, and we were shocked to find a massive game convention full of explosions and violence hosting this little independent video game about a man’s personal journey with his young, sick child. We were intrigued by the separation that developed between the physical space we were in and the emotional sphere that built up around the That Dragon, Cancer booth. In the end, we think that scene demonstrates how on the one hand, Ryan and Amy’s game is so unusual in the video game world, and yet at the same time how remarkably open-minded and accepting gamers can be; perhaps even how hungry they are for more challenging stories to be told in this medium.

Filmmaker: Since, in many instances, the video game mirrors events taken directly from Ryan’s life experiences (albeit in hyper-realized versions), how did you determine when to toggle between scenes of the game and scenes from Ryan’s direct encounters with Joel’s condition?

Osit: The video game provided us with a rare boon as documentary filmmakers, in that we had a virtual window into the minds of the protagonists of our film. However, we didn’t want to just rely on the beautiful visual content of the video game to tell our story, as it’s its own work of art and it would have felt wrong to merely cannibalize it into our film. So we’d always ask ourselves how using footage from the video game would enhance the narrative of our story (as distinct from the story Ryan and Amy were telling in the video game), and how showing the game would enhance the audience’s emotional understanding of Ryan and Amy’s journey with their son.