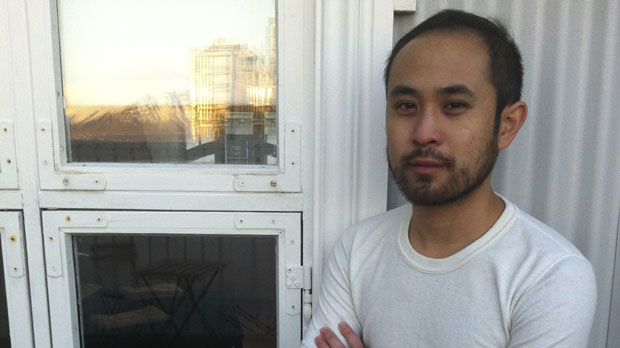 Los Angeles-based director/visual artist Andrew Thomas Huang’s trademark motifs — bodies and nonphysical objects breaking down and reintegrating, inanimate objects from the natural world coming to life, a penchant for unnerving grotesquerie in the vein of personal inspiration Chris Cunningham — took time to crystallize. After receiving a bachelor’s degree in fine arts from the University of Southern California, Huang decided to make a short film outside the program. The result was 2005’s Doll Face, in which a robot gets obsessed with TV images, trying to remake itself in their likeness. “It led to signing with a production company and beginning commercial and video work, [including many music videos],” Huang noted in an email.

Huang’s second film was his animation minor graduation effort The Gloaming, a dreamily creepy hallucination about a late-night office worker who crawls into a tunnel that opens up in his computer monitor only to be pursued by a flock of seemingly homicidal birds. The film was made using pixilation, a stop-motion technique in which an actor is shot against a green-screen. Huang’s consistently made a name for himself through his comfort with a variety of different live-action and animation techniques. “Nearly everything I do involves problem solving in some form or another,” he notes.  “In the beginning, I was largely self-taught.  But as I’ve gotten older and have collaborated with more people, I learn best from others and working in groups where people share tips and tricks.  When all else fails, I turn to YouTube, or Digital Tutors to find tutorials on what I need.”

Solipsist, Huang’s experimental third film — self-described on the project’s Kickstarter as a “three part psychedelic fantasy short film about otherworldly beings whose minds and bodies converge into one entity” — required two months of pre-production, two days to shoot and nine months for special effects. The result received a Special Jury Prize for Experimental Short at Slamdance 2012 and got Björk’s attention, prompting her to recruit Huang for “Mutual Core,” his highest-profile video yet. No stranger to out-there clips, Björk is the immovable center of attention as multicolored sand builds up and collapses into unnervingly alive geological formations around her. His video this year for Sigur Rós’ “Brennisteinn” is equally unnerving while using a murkier palate, with the Icelandic post-rockers noisily reinventing themselves in the midst of more mysterious tendrils, thrashing in the middle of muddy earth. “I either like to use tons of color and go aggressively psychedelic,” Huang says, “or strip everything down and go incredibly monochromatic. Tim Burton did that in his early films (e.g. Edward Scissorhands) and I loved that dichotomy.”

The natural world is both pregnant with possibilities and vaguely threatening — a Huang trademark. “I don’t like to make work that is sensational,” he explained. “It’s not my intent to make ‘disturbing’ work. But in the act of earnestly exploring certain themes that reappear in my work, there’s always some sort of return to body imagery that can inevitably turn weird and get under people’s skin. If that’s the by-product of my work, I think that can only be a good thing.” Though rumors of a first feature have always circulated, Huang says his current focus is “on more short-form and motion-based art pieces. And of course, music videos.” — V.R.