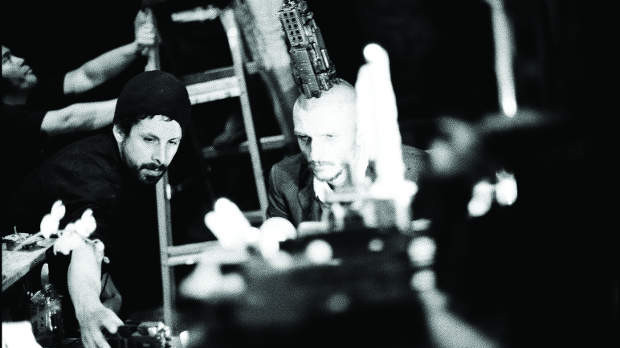 From the outside it looked like Eddie Alcazar had it all figured out. With only a year under his belt at the Academy of Art University where he studied visual effects and animation film theory, Electronic Arts plucked him in 2004 to work in its game design division on the Medal of Honor series. A year and a half later he started the digital content creation boutique Alcazar Entertainment, where he did the video game design and 3D modeling for more than 30 commercials and games, including The Matrix: Path of Neo, James Bond: From Russia with Love and Oddworld: The Brutal Ballad of Fangus Klot. Though the money was good, Alcazar wasn’t satisfied creatively. So in 2007 he sold the company and began writing a feature film script.

“I didn’t go to film school,” Alcazar, 31, says while on the phone in his car in L.A., “but I was very much aware of composition and how to make a film in a 3D realm. So I just explored different techniques and ideas and experimented by making shorts.”

With a handful of shorts under his belt (none of which he submitted to festivals) and living off his savings, Alcazar began developing 0000 (pronounced Zero), a live-action film that follows a man (Aaron Behr) as he tries to create a collective consciousness that will give birth to a new era of human existence. However, this exploration is rooted in a dark tragedy from his past. “It’s really a ‘loss of love’ story,” Alcazar says. “I definitely think my past has a lot to do with how this is told. It’s very personal but it also touches on areas I’m hugely interested in, like technology and philosophy.”

The teaser trailer certainly has grabbed the attention of many. Indeed, the film’s development is being tracked breathlessly on sites like Twitch and Quiet Earth. With its 35mm high contrast look (shot by college friend Matthias Koenigswieser) and its mind-bending imagery, some are comparing the footage to indie sci-fi stalwarts Pi or Primer, which Alcazar gets a chuckle out of. “We’re trying to keep it a mystery,” he says of the plot. “When you see the whole thing you’ll realize how different the film is from the teaser.”

Shot in New Mexico last year for three weeks, the film is currently in post with the hope of being locked in time for the Sundance submission deadline.

But with Alcazar’s all-in mentality, a question still lingers: What happens if 0000 doesn’t live up to the hype? “I told myself I wouldn’t go back to gaming,” he says. “Now I’m just selling assets to last until I’m done with the film, and then I’ll figure it out.” — Jason Guerrasio