Projecting Outside the Echo Chamber 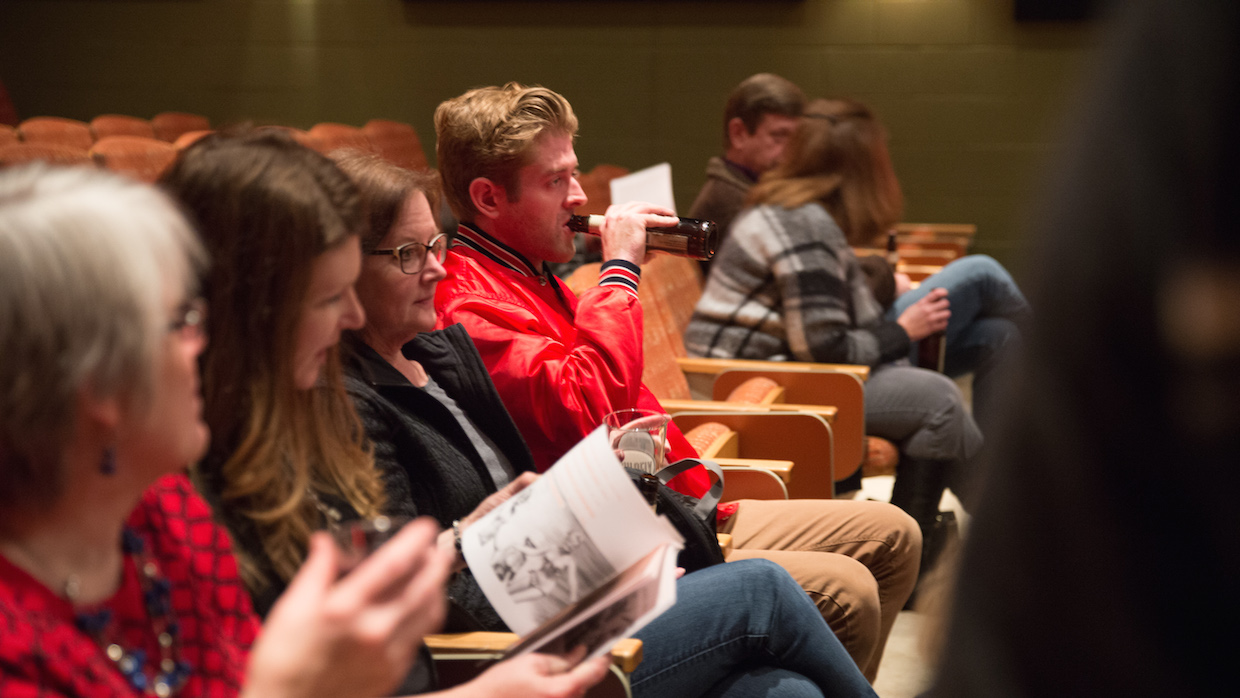 An audience at the Ragtag Cinema (Photo by Billie Stock, courtesy of Ragtag Film Society)

In the past decade, I have screened thousands of documentary festival submissions. That amounts to countless hours of observing — or, more often than not, being told about — the horrifying effects of war, discrimination, depression, censorship, animal slaughter, plastic bottles, shoddy reporting, asbestos and mountaintop removal. Befitting this past decade of “hope,” I have also been given the tools to fix those problems: a program I can donate to, a message to spread to my community, a website I can visit to learn more. Nearly every one of these films has failed to leave an impression. They don’t make me feel any more knowledgeable about the world, and they haven’t inspired me to lift a finger.

I program Ragtag Cinema, an arthouse theater in Columbia, Missouri, a left-leaning college town located in the center of the now overwhelmingly right-leaning state. I discovered the space as a closeted, 14-year-old Catholic school boy. As long as I’ve attended, the theater’s core audience, as well as its staff, has predominantly consisted of white progressives. I count myself among them. Ragtag is a project of the same organization that puts on the True/False Film Fest, where I also work as a programmer. True/False’s mission, and the cinema’s as well, is to spread media literacy throughout our community. At the festival, this means that we vehemently avoid documentaries that talk down to their viewers. Inevitably, a number of our films revolve around negligent or even malicious misuse and misreading of images, often by the broadcast media.

From 2012 until today, I organized a monthly screening series of educational documentaries at the cinema. Each event spotlighted a different community organization, e.g., a river clean-up crew, a shelter for domestic abuse victims, a space for LGBTQ youth. Those organizations helped select films pertinent to their work in our community. They also facilitated post-screening conversations. All of these events were free, and we donated our larger theater, which seats around 150 people, plus our staff. Our primary motivation was to educate our community and offer them a tangible means of helping. A secondary interest was to introduce new people (i.e., the partner organization’s members), to the space in the hopes that a few would be intrigued enough to return.

I met with each organization to help select the films. I entered each meeting with a list of suggestions, and more often than not, they did, too. Their goals were almost always the same. They wanted people to leave with a greater understanding of the problem they’re attempting to address. Mine morphed over time. At first, I was a snotty young formalist, thinking of a cinephile audience that barely exists in mid-Missouri. I quickly came to realize my position was immature, and I instead attempted to locate appealing repertory titles that felt relevant to the organization (note to other programmers: The Burning Bed is no longer appealing).

Lo and behold, their short lists frequently contained run-of-the-mill educational films I’d already encountered during the festival submissions process. Invariably, they’d received an email from the director, who smartly targeted like-minded organizations throughout the country. These warmly worded form letters establish a shared goal, then pitch the idea of a film screening to reach new audiences, because the cinematic language moves people more than any presentation could, and also people love watching movies.

In the festival screening process, where a film’s formal qualities are of high interest, their film would be deemed unworthy of a theatrical space. But in the context of this particular series, the film felt like a perfect fit. Whereas my suggestion tangentially touched on the organization’s work, their film spoke directly and succinctly about it, almost like it was designed to precede a panel conversation. So more often than not, I put aside my filmmaking quibbles and booked the organization’s top choice.

The directors or distributor rarely mentions money in the initial email. But screening fees for these films were often hundreds of dollars higher than our other films, and given that nonprofit organizations have no clue how the film business works, they’d usually go along with it. After years of feeling sorry for these filmmakers, I started to become suspicious of their reasons for making documentaries. But every so often we would host the filmmaker or Skype them in for the discussion, and none struck me as cynical. They seemed passionate about their subjects and convinced these screenings were making a difference.

However, after five years of attending each of these events, let me tell you what tends to happen: The same 20 or 30 people show up. I know most of them by name, and they’re generally pleasant and engaged. But they attend nearly everything we do. If the partner organization has a large following or has aggressively promoted the screening, they will likely fill the space with their own followers. The post-film panelists almost always offered useful context, but once the discussion spilled out into the audience, it became clear we were in an echo chamber.

There was one startling exception. Following a documentary about teenage suicide, several mental health clinic representatives facilitated a discussion about what resources mid-Missouri has to offer. After a few minutes of even-keeled conversation, an audience member raised her hand and asked why it takes so many weeks for these local clinics to book an appointment with her depressed teenager. Another visibly frustrated parent chimed in to concur, and for once, it felt like a free community screening had attracted people who were truly affected by the topic. And they didn’t seem to be satisfied by the information they were receiving. It felt like someone threw a bucket of cold water on our theater of polite, progressive chatter.

It hurts to admit this, but after five years of earnest programming, I’ve come to the conclusion that I have wasted my time, and I suspect others’ as well. Perhaps it generated some money or volunteer work for the partnering organizations. Maybe it introduced a few new regulars to the space. I’m certain it helped the filmmakers pay rent. But more than anything, it fed into the myth that this pervasive, pedantic sort of documentary can change the world. As I step into the head programming job this summer, I’ve decided that I’m never touching another one again.

But in the spirit of these films, I feel I must offer a solution for my fellow programmers who are currently catering to an older, white progressive base. The problem is that I’m not yet qualified to confidently advise. So instead, I’m writing down a mix of ideas and principles I aspire to follow in the years ahead. In part to hold myself accountable but also in hopes of inspiring others to Make a Difference.

I’m convinced most people watch fiction films to see themselves. Therefore, you are deciding who your audience is when you select what narratives to screen. If you follow the traditional arthouse booking model (i.e., programming each week’s highest PSAs), you will fail. Setting aside the overly competitive months of November, December and January, when there’s a surfeit of well-funded theatrical campaigns and, increasingly, a wider variety of stories, most big-name arthouse distributors have been putting their theatrical muscle into the white, liberal grey dollar. Support the small distributors who are bucking this trend.

When you can’t locate new films, play repertory titles. Note that our canons are different. Follow a wide variety of publications to figure out what films resonate with other audiences. Did you notice all the 20-year-anniversary pieces written about Love Jones and Selena?

Involve the people you want to see in this process. Ask them not just to be promoters but curators as well. Find ways to compensate them for their time. If you can’t yet afford to offer money, offer free entry to your theater and a job title to recognize their time and energy.

Empower your community in the programming process by creating a simple, easily accessible form on your website where they can request movies. Don’t ask them to guarantee a ticket purchase, but do take down their email and do make it clear that the more requests you receive for a film, the more likely it is you are to play it. Meet with a wide variety of organizations in your town on a regular basis. Scour your city’s page on GreatNonprofits.com and start setting up meetings. Look at your schools’ student clubs, and do the same. Give your email out, explain that you’re open to collaborations. Take notes about what they want to see. Keep an eye out for possible collaborators, people who love movies but never considered they could find work in the industry. Stay in touch with the organizations. And when films pop up that seem relevant to their interests, reach out.

Post-screening conversations are extremely valuable, so long as you select the right films and conversation facilitators. Program them not after audience-coddling documentaries but after regular-run movies. Host a panel after a film like Elle. Often try to include a person or two who hates or has qualms with the movie. The theater should be a place where viewers are interrogating images, not just appreciating them.

Awareness-raising, “impact”-oriented documentaries try to stir audiences into action, but secretly, they make people feel as if they’ve done a good deed by simply bearing witness. Play documentaries that intelligently confront all viewers, documentaries that convey ideas and concepts, rather than films that hinge on cheap empathy. This year, keep an eye on Guido Hendrikx’s Stranger in Paradise, Yance Ford’s Strong Island and Ulrich Seidl’s Safari.

In an ideal world, it wouldn’t cost money to attend the cinema. For now, attempt to find wealthy patrons who can help offset ticket costs for low-income families. Express this interest to guidance counselors and to the organizations that work with individuals working under the poverty line. Offer as many free screenings as possible. Or screenings where donations are encouraged but not required. Life sucks for most people. Play happy movies, too.