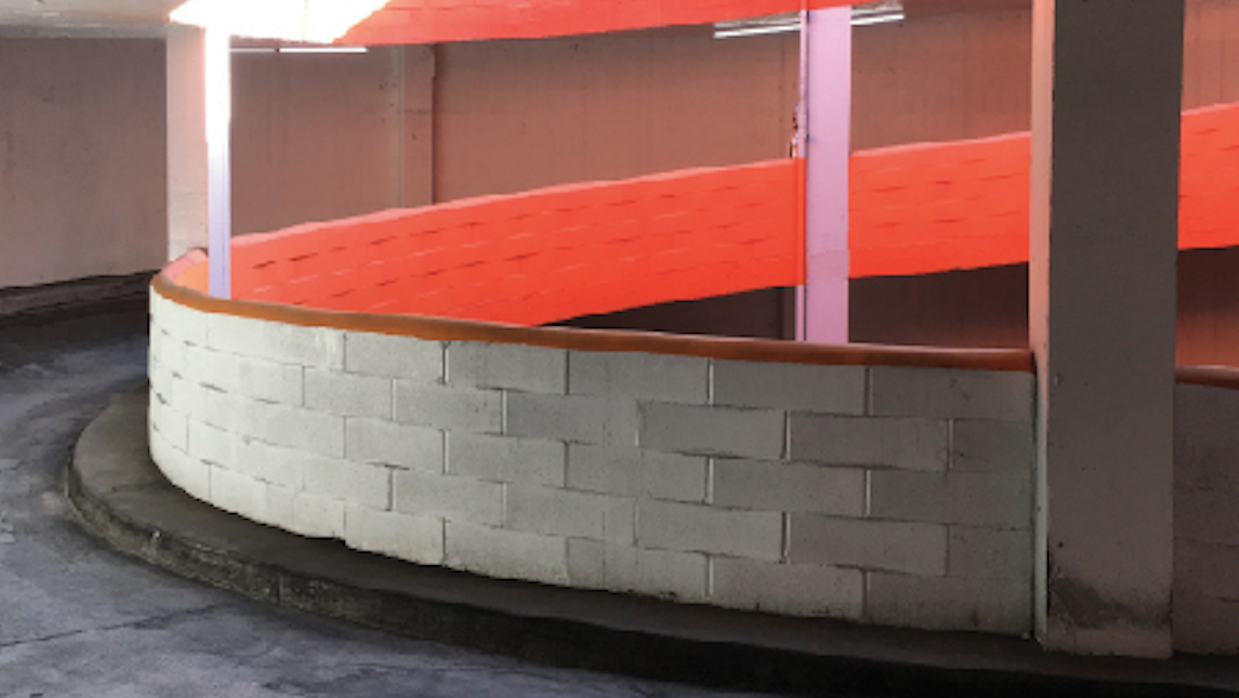 For Filmmaker‘s 25th Anniversary issue, we took note of production designer Judy Becker’s lovely Instagram, where she posts location scout photos and other inspirations that inevitably find their way into her design work. We asked her to write more about this convergence with social media and production design practice, and here’s what she wrote back.

I’ve taken photographs pretty much my whole life. I got my first camera when I was about seven, when my family spent the summer in Rotterdam, Netherlands, everyone’s first trip to Europe. My parents were lax, to say the least, and I remember walking around by myself, taking photos of buildings and inanimate objects — a tennis ball as seen through a chain link fence, for example. So, not much has changed since then.

I take photos when I walk around the city, and wherever I happen to be — a doctor’s waiting room, a public restroom, the dry cleaner — I can always find something interesting. I work on location a lot, and no place could ever be boring to me — my camera (phone) is all I need. Although I photograph a lot of things, I‘m especially drawn to things I think I might use in my work — signs, for example. It’s so hard to make a movie sign look real that I collect

as many examples of real ones as I can to refer to when needed. (I never post the best ones on Instagram, though!)

For a while, I emailed particularly inspiring photos to friends and colleagues who I thought might like them. Because I’m not interested in publicly sharing anything about myself beyond these images, though, I was never interested in social media.

But then, in 2012, I was at the Sundance Film Festival for Rick Alverson’s The Comedy, which my husband had edited. One of the producers noticed me taking pictures of the condo he and the other producers were sharing (I was photographing the mess they had created after  days of film festival condo living) and told me about Instagram. It still took me a few months to actually try it, but once I did, I started posting regularly.

For me, the uses of Instagram were obvious — it was a convenient way to keep a visual diary, and it was also useful as a mini pocket reference of inspiration (leftover food, ghost signs, boarded-up windows and so on).

I had no idea most people thought of Instagram in other ways until I had a meeting with a director in a coffee shop in Hollywood. As we started to bond over our mutual Instagram habit, he said, “Yeah, it’s a great way to make people jealous.” 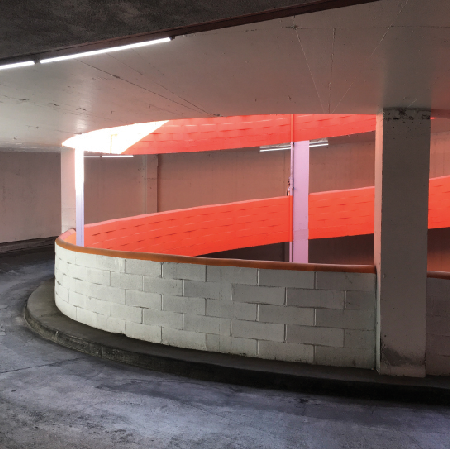 I took this when I was walking to set after parking my car at the Feud crew parking lot in downtown Los Angeles. I love the unexpected and the beauty of the commonplace utilitarian — to me, this is more beautiful than the Dan Flavin exhibition I saw at the Guggenheim many years ago. 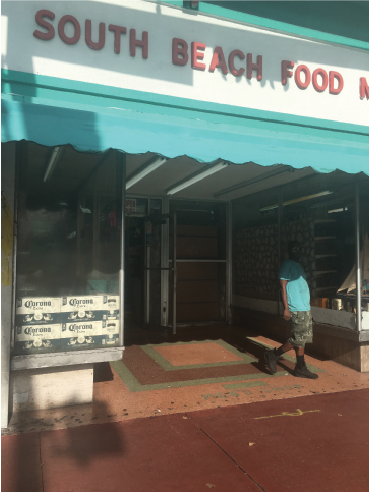 I spent more than a month in Miami Beach for The Assassination of Gianni Versace: American Crime Story. I loved Miami and spent as much time as I could walking around — after a year of working in Los Angeles and driving everywhere, it felt like freedom.

I was designing with an almost experimental use of a color palette, with a lot of monochromatic sets and the use of tone on tone. So I was noticing this everywhere I went, and although I was interested in the signs on this storefront, the T-shirt and the awning made the photo for me. 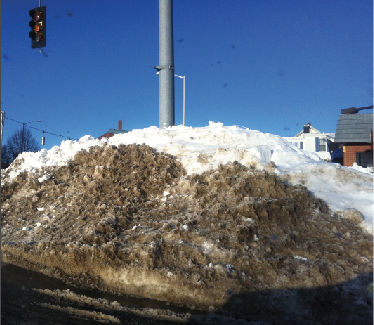 I’ve worked on two movies in Boston, both during the winter. I grew up in New York, and I know what a snow day is, but I didn’t know a movie shoot could have them, too. This is from the Joy shoot in 2015. I love this photo and not just for the memories (as when the roof of our stage caved in from the weight of the snow, and we didn’t know for a week or two if we would be allowed back in). I mainly love the filth and grime, a standard fascination of mine, and something I would put in my “library” of scenic reference. 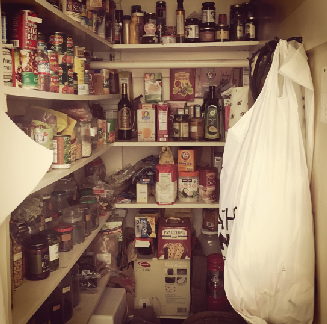 Another great thing about location scouting is the opportunity it gives me to snoop around and take pictures of the hidden aspects of people’s lives. I love opening cabinets and closet doors, especially when they are in the home of someone who has lived there a long time. This pantry was in a very stylishly decorated, mid-century Spanish-style house in Los Angeles. I love the extremely varied shapes and sizes of food goods crammed together and the way the plastic bags hanging from the hooks create a proscenium. 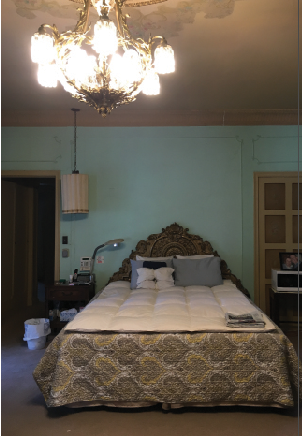 Location scouting can be tedious, but when I get to see a home like this it makes all the McMansions worth it. Reality is really stranger than fiction, and that’s why it’s so hard to make a set look believable — it’s all the little things. This bedroom was in a very beautiful and grand old house in a gated community near Hancock Park. The gentleman who lived there had spent his whole life in the house. I could never have made up the plastic wastebasket with the white plastic liner next to that Rococo bed or the stacked newspaper at the foot of it. 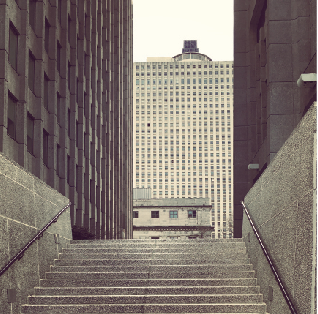 I was walking around downtown Memphis, a city I first visited in 2015 as a juror for the Indie Memphis Film Festival, when I saw these buildings. I love Brutalist architecture. To me, it seems as modern and foreboding as it must have seemed to Truffaut and Antonioni. 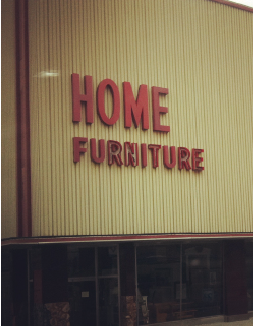 I’ve become more of an Instagram purist, so it’s a bit odd to look back at some of my older posts and see how heavily filtered they were.

I took this in Ohio, north of Cincinnati, while scouting for Carol in early 2014. Period storefronts are hard to pull off, and I’m always looking for examples of manufactured signs that don’t look quaint or kitschy. I love the scale and graphic simplicity of huge signs like this. I was also attracted to the way this sign has aged and is starting to fall apart. 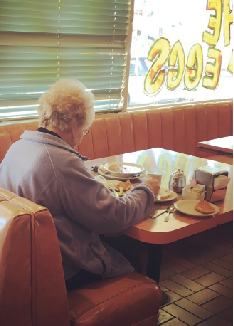 This one is not so much inspiration for me as an encapsulation of references, memories and ideas. I took it while scouting in Long Beach for Battle of the Sexes. I love the color palette, which is reminiscent of the one I used in Carol. But it also reminds me of the scene in Brokeback Mountain where Heath Ledger is eating pie alone in the Greyhound station coffee shop. When planning that scene, Ang Lee and I would sometimes refer to it as the “Edward Hopper” scene. And this woman eating alone in a diner definitely reminded me of an Edward Hopper painting.

So often, the references come full circle. And I really think that is the core of my work.

Judy Becker has worked with David O. Russell, Todd Hanes, Jonathan Dayton and Valerie Faris and many other acclaimed feature film directors. She received an Academy Award nomination for her work on American Hustle. She has also worked in television with Lena Dunham and Ryan Murphy. Some of her personal favorites are Taxi Driver, Mean Streets and The King of Comedy; William Eggleston and Stephen Shore; Mies van der Rohe’s Barcelona Pavilion, Sunnylands and all Brutalist architecture.

Also, make sure to read Becker on “What Makes a Good Production Designer.”