“I Don’t Want To Kill a Medium”: Director Sean Baker Talks The Florida Project and iPhones at IFP Week 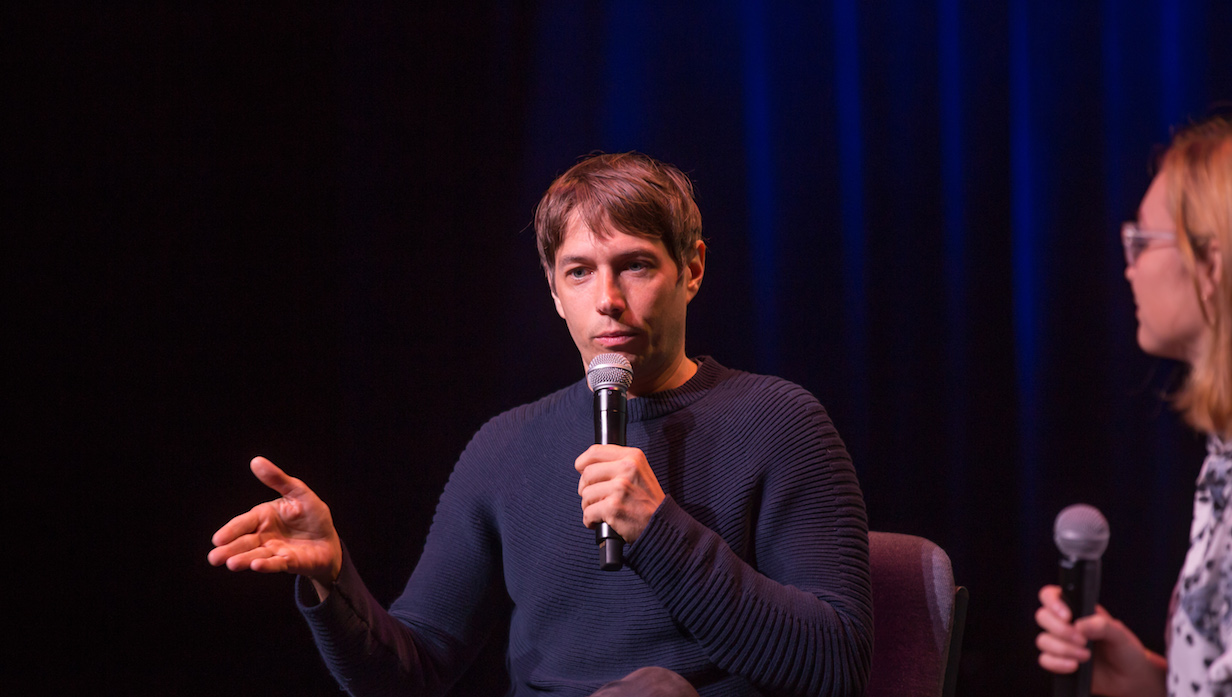 Sean Baker (Tangerine) talks about The Florida Project and iPhone filmmaking at IFP Week on September 17, 2017.

Sean Baker is amazed some people still think he’s a new filmmaker. That implies that he’s young. On the contrary. “I’m old,” Baker remarked during his talk at IFP Week 2017. (Or at least he’s 46.) Back in 2015, Tangerine put him on the map. And it was shot on an iPhone 5S, which made him seem like some millennial who’d never even heard of a Bolex. As it happens, Tangerine was his fifth film. The others weren’t obscure; Four Letter Words, Take Out, Prince of Broadway and Starlet were all acclaimed. (He also spent years as the co-creator of the show Greg the Bunny.) As if to prove his age and the breadth of his CV, his latest, The Florida Project, due in theaters November 10, was filmed on glorious, gorgeous 35mm.

“I was becoming the iPhone guy, and I wanted to flip it,” Baker told New York and Vulture critic Emily Yoshida, who moderated the talk. “But it’s weird, because it felt like [the iPhone] has been inspiring. It’s helped democratize filmmaking. For documentaries especially it should be used. It’s this new medium that we should embrace, because obviously you can find beauty in this medium.”

But he’s also torn. “I’m worried about the death of film. I’m a cinephile. I made my first film [Four Letter Words] on 35. There’s an organic quality to celluloid that, no matter what filters you have, what grain you want to throw on your digital, no matter what you’ll never be able to achieve that. I don’t care what anyone says. We’ve actually done a lot of tests; we did a film-out on the digital moments in The Florida Project just to test it.”

The Florida Project is another blindingly bright and candy-colored Sean Baker film about a community dwelling in society’s margins. This time the setting is the Sunshine State. The protagonists are younger too: They’re kids, including a six-year-old named Moonee (newcomer Brooklynn Prince), who live in a dingy motor lodge in the shadows of Disney World. And like most Baker movies, they find a filmmaker immersing himself in a world he didn’t know before he happened upon it.

“Unless they’re making calling cards to Hollywood, the films most filmmakers make tend to be responses to what they want to see and what they’re not seeing in cinema,” Baker explained. “These sorts of stories, this approach to storytelling, has been around. But I wasn’t seeing a lot of it in U.S. filmmaking. Take Out and Prince of Broadway were responses to what I wasn’t seeing at the time. With Prince of Broadway, of the two leads, one is an undocumented immigrant from Ghana and the other is an Armenian immigrant. They’re both working in the wholesale district [of Manhattan]. I was like, ‘That would be a unique perspective on New York. Why don’t we explore that?’”

Baker has always been one to embrace new tech. He and his co-director, Shih-Ching Tsou (who’s produced his last four films, including the short Snowbird), were inspired to shoot Take Out (2005) on a Sony PD150 because of the Dogme 95 movement, as well as a flurry of films, like Tadpole and Pieces of April, that were also made with standard-definition cameras.

“It’s awesome when new tools come about, especially what non-linear editing did,” Baker said. When he studied at NYU, he didn’t learn editing on an Avid. “I’m glad I did get to edit 16 and even 35 on a Steenbeck. But there’s no way I’m ever going back to that. It’s a waste of time.” Still, he hopes young filmmakers at least get a taste of old-school editing. “It should be experienced for one time in your life — to get to actually see the film when you put it up to the light and just feel the organic nature of what you’re cutting. You actually see the 24 frames, you can touch it.”

Still, form is sometimes born of necessity. Baker said shooting Tangerine with a smartphone is a good example. “I still get this, that it was a stunt, shooting on the iPhone. And it truly wasn’t. It really did come from a truly organic place,” Baker explained. The film was executive produced by Mark and Jay Duplass, who had given them a specific (read: small) amount of money. After breaking down the script and its many locations, he and his team realized it would be impossible to make with their budget.

“It just happened that the 5S had just come out with HD video. It was a big jump, a big technological advancement,” Baker said. On top of that, new tools had just come out, including Filmic Pro, the app they wound up using.

“I had shot clandestinely before, with small equipment and a small crew. But this took it to a different level. We didn’t even know how much this was going to help us,” Baker recalled. The tininess of their equipment also helped them on location. “We were shooting in this area — not exactly the safest area. We didn’t want to draw attention to ourselves. If you saw us from ten feet away, it would look like we were either shooting selfies or YouTube videos. If anything, the biggest giveaway that we were a professional crew was our boom mike.”

They noticed the difference on the first day, especially when it came to working with first-time and nonprofessional actors. “We were able to remove all intimidation,” Baker said. “To shove a camera in [non-pros’] faces, it’s quite intimidating. You do that with an iPhone, though… everyone has a smartphone. Suddenly you realize they’re very comfortable, because they’re not intimidating. There’s a big difference between that and having a huge camera, or any sort of camera with a lens.”

Baker points out that, when they took Tangerine to Sundance, they didn’t overplay the iPhone angle. “We didn’t even want people to know that until after our premiere,” Baker said. He didn’t even think they’d be special. “I went to Sundance that year expecting we were going to be one of ten iPhone movies. I think we were the only ones. [Searching for] Sugar Man had sections shot on the iPhone.” (He also pointed out that Jean-Luc Godard’s Goodbye to Language had a lot of iPhone footage, too.)

Baker’s films have another, arguably even more notable thing going for them: They tend to star first-timers. That’s the term he uses for stars like Brooklynn Prince or Kitana Kiki Rodriguez and Mya Taylor from Tangerine. He’s careful to make the distinction between “first-timers” and “non-pros,” especially now.

“It’s something that to this day upsets — that with Prince of Broadway, people kept referring to [star] Prince Adu as a ‘non-professional,’” Baker explained. “That really hurt him. He was nominated for a Gotham award, he was taken very seriously in all the reviews. But if the industry hears ‘non-professional,’ they think ‘unprofessional.’ Now, to this day, I say there’s the seasoned actors, there’s the first-timers, and then there’s the non-professionals, which means grabbing people off the street and saying, ‘Do you want to be in an independent film? Act now!’ I don’t want the same thing to happen with Kiki and Mya. I say they have an acting career ahead of them and this is just their first time.”

Even as someone who’s often using cutting edge tech to make his films, Baker still understands its limitations. He pointed to digital preservation as something to worry about. “If you don’t spin your drives, in three years you could lose your film. If you have a print of your film, it can sit in a vault for 1,000 years. We still haven’t figured this out and it’s a problem,” Baker explained. “If you have the means to do it and you feel it will work for your project, shoot on film — especially in 2017. It helps keep Kodak going, it helps keep the labs open. It’s the medium that created cinema, let’s keep it alive.

“At the same time, we have all these new tools,” Baker adds. “If you’re in a place, like I’ve been several times over the last 25 years, where you have no money and you’re barely paying rent, and you need to shoot your film now, you find an iPhone. Do it any way you can. Or if you say, ‘The story I’m trying to tell is more appropriate for digital, I can find beauty in digital, I can find beauty in an iPhone,’ it’s your choice, it’s your story. I don’t want to kill a medium just because a new, cheaper one comes about.”