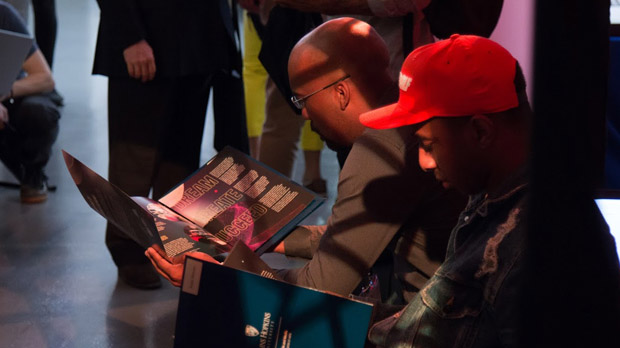 by Randy Astle
in Filmmaking, Interviews, Transmedia
on Nov 22, 2017

In last summer’s print issue of Filmmaker I wrote about the ways that university film and computer science departments are adapting to teach virtual and augmented reality in their classrooms. In schools all over the world, students are finding ways to use VR and AR to create narrative films, documentaries, animation and games as aids in therapy, medicine, architecture and innumerable other fields. Now the newest school to launch a program is Johns Hopkins University in Baltimore, where a graduate level Immersive Storytelling and Emerging Technologies Program is beginning in January. Headed by filmmaker Gabo Arora under the direction of Roberto Busó-García, the Director of the school’s Film & Media Graduate Program, the new program will seek to teach all the technical and theoretical skills necessary for a career in VR/AR while reaching beyond the traditional white male demographic that has dominated much of the field thus far. This isn’t surprising given both Johns Hopkins’ already diverse student body — 77% persons of color and 66% female — and Arora’s career creating virtual reality documentaries for the United Nations over the past several years. I wrote this spring about his moving VR Holocaust memorial The Last Goodbye, and he is perhaps best known for Clouds Over Sidra, a 2015 VR doc about the Syrian refugee crisis. This emphasis on social issues and underrepresented demographics stands to be a hallmark of JHU’s new program.

I talked with Busó-García and Arora about the origins of the program and what they envision for its future and the future of VR/AR.

Filmmaker: How did the program come together and how did you each get involved with it? Did it originate with Johns Hopkins or from outside sources?

Busó-García: We had intended to include immersive media and creative technologies as part of the Film & Media graduate program’s curriculum since I designed and launched the program in September 2015. While we grew other aspects of the program, I started looking for the perfect person to help design and launch the concentration and Gabo was always at the top of the list. After we met at Versions 2017, he accepted the challenge. The Saul Zaentz Innovation Fund then came on board to help fund the pilot program and here we are.

Arora: I never took academia seriously. How could one teach VR/AR when it is so new and experimental? I always found people who claimed themselves to be experts or to proclaim certainties as being disingenuous opportunists. Also, most universities are so prohibitively expensive and not diverse — they only perpetuate the inequality in the world. It didn’t seem like the right fit, especially after all my years working at the United Nations as a humanitarian and a filmmaker. So, when Roberto came to me to do this, I was skeptical. But that all changed when I realized that his vision for the school and this program would be radical. It would have diversity and inclusion at the core of its mission. It would be interdisciplinary. It would make social impact a strong part of its DNA. That got me interested. So I worked, along with the consultation of the best of the best in VR/AR, to come up with a curriculum we would all want to take ourselves as creators. One where I would learn as much from teaching as the students would from learning. It was a crazy exercise in wishful thinking, or at least I thought. Until Roberto came back saying it was great and we shouldn’t hold back..and now it exists! It’s happening!

Filmmaker: So what is Immersive Storytelling & Emerging Technologies? In other words, what will be the core emphasis of the curriculum?

Busó-García: The courses and initiatives in our concentration all aim to explore some of the most pressing issues in the creative technologies field as they relate to storytelling, artistic expression and social impact. We hope to create a space at Hopkins to exchange ideas, challenge traditional approaches and continue to bridge the access gap between talented and visionary individuals in Baltimore and the industry at large.

Arora: We will learn by doing. While it makes a bit of sense to talk about theory, and to give students a general philosophical approach to creating works in VR and AR, the emphasis will be on making groundbreaking projects. This is important because so much of what we thought we couldn’t do at the beginning has been proven wrong (no jump cuts, don’t move the camera, etc.), so we will foster a spirit of experimentation and rebellion against rigid thinking. This can only be done through projects — through showing rather than telling. This program, at the end of it, will only be a success if we make things that matter and measure their impact.

Filmmaker: Lots of university film and computer science programs are branching into transmedia, virtual reality, augmented reality and similar fields. So given your curriculum and emphasis on production, how do you envision the Immersive Storytelling & Emerging Technologies concentration fitting into that landscape?

Busó-García: Johns Hopkins and Baltimore are perfectly positioned to bring together the boldest, most original and most talented minds to dream up and create game-changing and impactful immersive experiences in a multitude of different fields. Baltimore is a microcosm of all that is incredible and challenging in 21st century America. Johns Hopkins excels as one of the top research institutions in the world in fields such as medicine, public health, engineering and international studies. Our program will be yet another space where they meet, as we strive to create immersive experiences that have both an aesthetic and social impact on the city and beyond.

Arora: We are the beginning of what will probably be one of the greatest technological transformations of our lifetimes. VR/AR/AI will reshape everything and its effects will be felt well beyond film and media. That is why it is important to make any new initiative interdisciplinary. There will be a lot of learning on how these new technologies can impact many fields, from medicine to journalism to international development. It will not make sense for anyone to work in silos. We launched this program showcasing a pilot project with the school of medicine for this reason. And we have many other projects we hope to establish with students from diverse backgrounds in the year ahead so they can see the relevance and the power of these new technologies on their own work, in new and unexpected ways, and in those of others. Our goal is not just to make documentaries and entertainment — though that of course will happen. We will train students to apply their knowledge to other fields to help solve problems of great importance.

Busó-García: Our Film & Media program attracts smart and driven individuals from all backgrounds with a firm commitment to take the next step in their careers within the film, television, and immersive media industries. Our students are incredibly diverse — 80% of the student body is made up of people of color — and this spectacular collection of unique perspectives makes for engaging, compelling and riveting collaborations and projects. All of our courses are taught by successful filmmakers, executives and technologists currently working at the highest level of the industry. This helps our graduates leave the program with a strong portfolio, a clear sense of their vocation and a solid path to gainful employment in their chosen field.

Arora: We want to make a program that will attract students who may not have thought they could ever work in VR/AR, because they didn’t have a tech background and are intimidated because they don’t see themselves represented by those that work in VR/AR currently and represent the industry. Honestly, if I am motivated at all by doing this, it is to diversify the range of people working with these technologies, especially given how transformative they will be in shaping our future. We envision graduates that will be leaders in the field, who will bring their diverse and interdisciplinary outlooks to solve a variety of problems.

Filmmaker: Can you drill down into one of the potential classes? What kind of work will students be doing?

Arora: One of our core courses will be “game engine camp,” where students learn how to code in Unity and understand the basics of building narratives in three dimensional environments you can walk through and live in. Each week students will develop a simple VR or AR application. The weekly assignments will help students gain development skills on a step-by-step basis. Each session will include mini-tutorials, such as Maya to Unity workflow, animation in Maya and Unity, live-action VR and, using motion capture data, Kinect and Arduino. The class will culminate in project presentation by student teams.

Busó-García: We will also have a “practicum” every semester where a leading VR/AR creator will house their project in the school and work to finish the last stage of their project with student support. As they approach the culmination of their degree, students will then work on a project of their own as a capstone, in collaboration with their peers, local artists and technologists and industry mentors.

Filmmaker: On a broader level, how are university courses like these poised to influence the future of filmmaking and digital storytelling? It’s hard to predict the technology, but where do you see immersive storytelling going in the next five to ten years?

Busó-García: We’ve designed our program so that the curriculum is flexible and experiential: our courses bring together students and professionals working together on what we hope will be groundbreaking projects. This is an exciting time, when a new art form is being forged. Learning while doing — and in this case, while exploring and pushing the boundaries of technology and content creation — we hope our students and faculty members can add their voice to the process of establishing a new audiovisual language.

Arora: Much like one would hire an MBA to handle their business strategy and finances currently, in the future I believe that immersive storytellers will have the same universal appeal and importance to future companies and society. There will of course be a plethora of opportunities for a new form of auteurship, to make content for art, for documentaries and entertainment. Though these skills will be equally translatable, and desirable, for a range of fields that will transform them. Great storytelling using immersive tech will empower new understandings, new beginnings and are a new frontier for how we will relate to the world, others and — most importantly — ourselves.