“That Sweet Spot of Story and Science”: Editors Dan Swietlik and Stephanie Mechura on The Game Changers 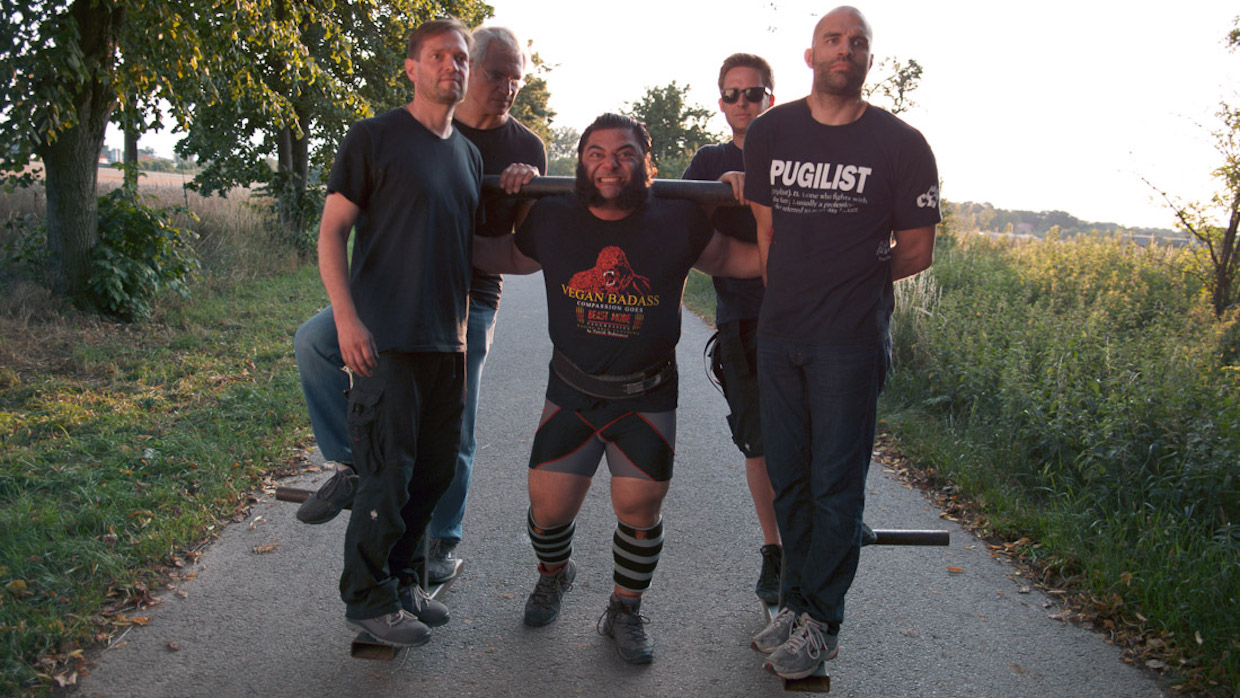 Louie Psihoyos, the Oscar-winning director of The Cove, returns to the Sundance Film Festival with The Game Changers, his new documentary on the health and environmental impacts of plant-based diets. Psihoyos premiered his previous doc, Racing Extinction, at the festival in 2015. To edit Game Changers, Psihoyos hired seasoned doc editor Dan Swietlik (An Inconvenient Truth, Sick0) to cut the film. He soon brought on a second editor, Stephanie Mechura (The Price of Sex), to help finish the job. Below, Swietlik and Mechura share their experiences on cutting The Game Changers.

Swietlik: It was a referral from a good friend of mine, Geoff Richman, who edited Michael Moore’s Sicko with me.  He’d gone on to work with Louie on The Cove and Racing Extinction, but was unavailable to work on The Game Changers. I’d always admired Louie’s work – not just the films, but all of his other efforts at conservation and preservation. So I was ready to get on board as soon as we had our first phone call.

Mechura: The documentary filmmaking world is a pretty small one, and word of mouth tends to be the way films come to my attention. Julie Hwang is one of the assistant editors on The Game Changers, and when it became clear to the team that they wanted to bring on a second editor, she recommended me – having worked with me on a previous film. The body of work proceeding both Louie Psihoyos and Dan Swietlik was inspiring, and I felt privileged to have the chance to meet with them. Once they described the film and its mission, and went on to describe the collective team-spirit of the filmmaking process, I knew that this was a team I wanted to join. I wouldn’t have been asked to come up for a meeting if I didn’t have a long history of documentary film editing under my belt, so although I think my past films were what got me my five minutes with the team, I think our meeting had the most to do with me being hired. I immediately felt a camaraderie with the team, and an excitement and commitment to the project that was contagious – critical ingredients to bringing a film across the finish line.

Swietlik: One of the bigger challenges of this film was to give each of the characters that James meets a strong story arc, but somehow work in all of the research and science that he came across during his investigation into the optimum diet for a human being. It took a lot of experimenting to find the balance between preserving an emotional story and providing enough scientific evidence to make a compelling argument.

Mechura: When you have a documentary film with this much gorgeous footage and this many characters, the challenge becomes how to distill each character to his or her absolute essence, while at the same time crafting each of their scenes in such a way so as to advance the message of the film. As we spent more and more time fine-tuning the individual stories of our main characters, their voice in our film also began to take shape. Three of our characters have natural dramatic arcs, and maintaining the tension in their stories while preserving the narrative of the overall film was one of the constant challenges during the edit.

Swietlik: The feedback screenings were one of the main ways we’d test our latest structure. Which characters were compelling? How much science was enough? We knew we couldn’t answer every question that any audience raised, but the trick was to detect which questions they were left with. In other words, if their questions showed that they were overwhelmed or confused by something, we’d have to fix that. If their questions indicated that we’d made an impression and they wanted to know more, then we knew we’d hit that sort of sweet spot of story and science.

Mechura: Once we were familiar with all of the footage, and believed we had a sense of what the stories were that we wanted to tell, it became lots and lots of trial and error, working quickly as a team to sketch out scenes, string them together and watch them down. Our production team was spread coast to coast, so posting review cuts became a critical ingredient of our dialogue, and the entire team was in constant conversation via Google Docs scripts as the film was taking shape. Once we had a rough cut of the film, we shared it with a select audience, and then asked that audience to respond to a questionnaire. We repeated that process two or three additional times before locking our cut.

Swietlik: I started out in commercials and music videos. When I started my own company, I always felt it should seize any opportunity to be a platform for creating some sort of positive change. Over the years I worked on many environmental PSAs and short films and found it incredibly gratifying. That led to the opportunity to work on An Inconvenient Truth, and that opened the door into more long-form documentaries.

Mechura: About 20 years ago, I saw an editor working on an AVID and I had two immediate reactions: I know what I want to do for the rest of my life, and I know I’m going to be really good at it. The first reaction remains true to this day, and the second is something I feel fortunate to have the chance to strive toward. I’ve had the opportunity to work alongside some of journalism’s most dedicated activists, and some of the world’s most accomplished storytellers – and it’s the passion for and the belief in the power of film which most affects my work. A powerful story, well-told, can change the world for the better.

Swietlik: Avid Media Composer. I’ve tried to embrace other systems in the past, but Media Composer is still the best tool for large, long-form projects.

Mechura: For long-form documentaries, AVID is my first choice for it stability, ability to handle huge projects across multiple edit stations and seamlessly integrate media of all kinds. Switching gears to Premiere when necessary is pretty simple, though in general I find the application less robust and nimble that AVID. I have not used Final Cut since FCP7 – but the more I hear about it the more tempted I am to give it a try.

Swietlik: We had so much great material, it wasn’t really any one scene that was the most difficult – it was which scenes stay and which ones go. It was very hard deleting scenes that felt strong, but we just didn’t have room for.

Mechura: Interestingly, this might have been the last scene of the film: a vérité scene that takes place during an afternoon celebration luncheon. The scene needed to be, literally, short, sweet, funny – and totally on point. We worked and reworked the scene…and the best moments worked their way to the surface.

Swietlik: Going in, I felt I was pretty aware of the impact of what I ate had on my health, and the health of the planet, and what we needed to do to make things better. It’s much more complicated and deeper than I’d ever imagined.

Mechura: The critical importance of the message of this film – for our health, our children’s health, and the health of the planet – has reached my core. I had already been a waxing/waning vegan for the past four years before joining this project. Having worked on this project, my thinking around the subject has become far more profound, and the switch feels permanent.