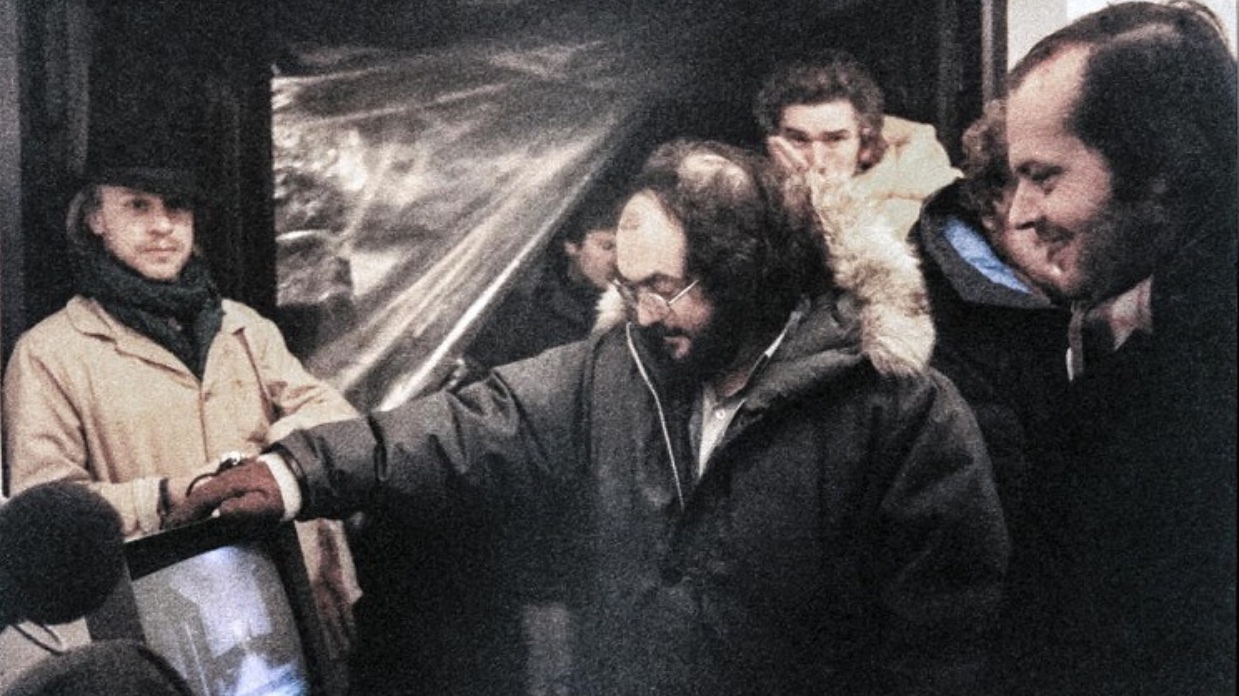 Filmworker, the title of Tony Zierra’s Cannes 2017-premiering portrait of Leon Vitali, is a term coined by the subject himself, probably still best known for his portrayal of Lord Bullingdon in Barry Lyndon. But the former British TV star, who set aside his rising career to spend three decades as Stanley Kubrick’s behind-the scenes right-hand man (and more), seems to have never fallen out of love with the acting craft.

Indeed, chatting with Kubrick’s actors’ coach/location scout/sound engineer/marketer — and current film restorer — one gets the sense that every role Kubrick tasked Vitali with was just that, a new “role.” Filmmaker spoke by phone with Vitali about his life as an actor outside the spotlight a week before Filmworker’s US premiere (at Metrograph in NYC on May 11th and Nuart in LA on May 18th, with a national rollout to follow).

Filmmaker: So Filmworker makes reference to Kubrick’s reputation for being hard on actors, and the fact that an actor could be fired for not knowing his lines. When I heard that, I immediately thought, “Well, yeah!” I mean, if you don’t know your lines as an actor you should be fired. That’s part of your job. To me, that’s an example of a director being professional, not difficult. Which makes me wonder if this whole “difficult to work with” notion was always just a false rumor about Kubrick.

Vitali: A lot of actors enjoyed working with him. And you know, it’s curious because they’ve sort of said, “Well, he didn’t direct me at all.” And I think what they mean is, they didn’t have a director who said, “Do this now. I want you to explode at this point.” Stanley never did that.

Filmmaker: I think that’s the actor’s job to find that moment, not the director’s.

Vitali: Exactly, yeah. So even when you think of that microscopic time that you are an actor with someone like Stanley, you kind of realize that it’s growth rather than a process of, “Yeah, I’m going to do this here, going to do that here.” Because it also depends on whom you’re acting with and what you can get back from that person. It’s chemistry. It’s everything everybody says about what acting’s all about. It is. You better believe it.

Filmmaker: You’ve always viewed acting as a job, I assume.

Vitali: Yeah. And there is that pressure. When I was at drama school, I saw this [job as] terrifying — somebody pinned up this newspaper article that said that on any given day 95% of all actors are not working. It was like this terrible chill went through my spine, you know? It’s true. And even with all the explosion of media outlets, and what have you, it’s not much better today. The access may be much more and greater, but so are the people who want to fill it. Maybe the statistic is not quite as high today — it’s probably as close, 85 or 90%. I mean, on any given day actors just aren’t working.

Filmmaker: Then again, some people shouldn’t be working. (laughs)

Filmmaker: I spent my twenties doing off-off-Broadway, and then gave it up when I realized just how hard a job it is.

Filmmaker: Oh, yeah, I much prefer writing — and filmmaking, for that matter. Since I’m not willing to sweat blood for acting I quit. And I really don’t enjoy the actors’ lifestyle at all.

Vitali: Well, you kind of wish there were more people with that kind of wisdom. I absolutely agree with you, and it’s absolutely what I think, too. You know, for me it’s kind of heartbreaking sometimes to see actors try so hard. And that becomes a block for them, too. It means their minds are pretty closed off, and they have no opportunities to open up and grow, to discover things, which is the long-run benefit of that life. And if you can’t go there, then it’s better that you don’t. Or you should find a way to channel that creativity to something you can relate to deeply, not just, “I’ve got an idea.”

Filmmaker: So I believe you’ve turned to writing now — or is this something you’ve been working on for years?

Vitali: In a way something I’ve been working on for years. And like with everything else I kind of thought, “I don’t really know how to do this.” I’ve always been an avid reader of books — whatever they are. Not any specific subject matter. Going into a bookstore once, I remember I was browsing through this section where it was all about philosophy and religion. And I was kind of thinking, standing there thinking, if all these books could talk to you now they’d all be saying, “Buy me. I’m right here. I’ve got the right way. Buy me. Buy me. Buy me.”

And I realized there are about a gazillion different ways that people process and look at life, and think about life. And I also realized that, getting back to Stanley and his films, the greatest task, the hardest thing to do was to get to simplicity.

I think of artists — composers and painters and musicians and that whole gamut of people — they’re stripping away as much as they can so that you can see what it is they’re actually trying to do, or trying to say. And that’s the hardest part of it all, not letting all the fluff and distraction creep into everything. I find that a really nice kind of challenge, which I’m doing with writing. I just enjoy that. I’m not thinking of anything ambitious, but if I find I’d like other people to look at this, and see what they think, and what they feel, it may lead to that. Who knows?

Filmmaker: But you never wanted to direct?

Vitali: Well, that wouldn’t be true. When I lived in Stockholm I went to the TV channels there with an idea for a film, and they accepted it. But it took them a year-and-a-half to schedule it. By that time I was so deep in with Full Metal Jacket I just couldn’t be there. I didn’t have time. And so it kind of disappeared and melted. And it didn’t bother me too much at the time, it really didn’t. It’s not a life or death thing for me, directing. I mean, Stanley used to let me work with the extras or on small scenes. In Eyes Wide Shut, when that gang comes down and starts barging past Tom — I choreographed all that. And the little boy Danny (in The Shining), I used to coach him. I coached many of the actors.

Filmmaker: It almost sounds as if you were a theater director on set.

Vitali: Well, the thing is, out of all the film and television directors I’ve worked with, Stanley was the closest to behaving like a theater director. Because it definitely was about letting the process work, you know? It wasn’t force-feeding.

Filmmaker: It wasn’t a total obsession with just getting the shot.

Vitali: No. And it’s interesting, because to be honest with you, of all the interviews, you’re the first person that’s kind of talked in this way about it. Obviously, you know the other side. So it’s refreshing for me to have a discussion like this.

You know, the other thing about making Filmworker — the experience of it was rather beautiful. You see the people who are interviewed, and you realize they were all on the same page. You know we couldn’t have achieved half as much of what we achieved if it hadn’t been for those people, who actually didn’t just walk the extra mile. They walked the extra 100 miles in some cases. And that to me is a lovely thing to carry away.

Filmmaker: It’s like the saying, “It takes a village.” Kubrick wasn’t some genius painter alone with a canvas. He simply could not have made his films without the village around him.

Filmmaker: That’s just how film works. Like how [producer] Jan [Harlan], who is classically trained, affected the soundtrack of 2001. He would never in a million years take credit for that film, but I wonder what 2001 would have sounded like, felt like, if Jan hadn’t been suggesting pieces for Stanley to listen to.

Vitali: Actually, I do know, because Stanley did record the soundtrack. A Hollywood composer, Alex North, wrote the soundtrack for it. But Stanley listened to it, and he just realized that when he was playing the soundtrack against the film it wasn’t really working.

I’ve just been working with it again, 2001. I did a 4K transfer, and I did the timing for the print that they’re showing in Cannes. I’ve seen it hundreds of times — and that soundtrack, it’s just so ethereal. It’s not trying to make you upset or angry, or be creepy. It’s just neutral. All the times they’re moving through space to another area in the universe, it’s just that. It’s an atmosphere. It doesn’t try to say, “this thing here is dangerous” and “here you’ve got to get scared” or anything like that. It’s just leaving it to you to soak in.

Filmmaker: That’s what makes it scary.

Vitali: Exactly. That’s what makes it scary. And it lingers with you for ages, forever in some cases… You know, Arthur Clarke once said that thing, that an artist only abandons his work. He doesn’t finish it, you know? You just have to give it up at some point. Up to the public or give up.