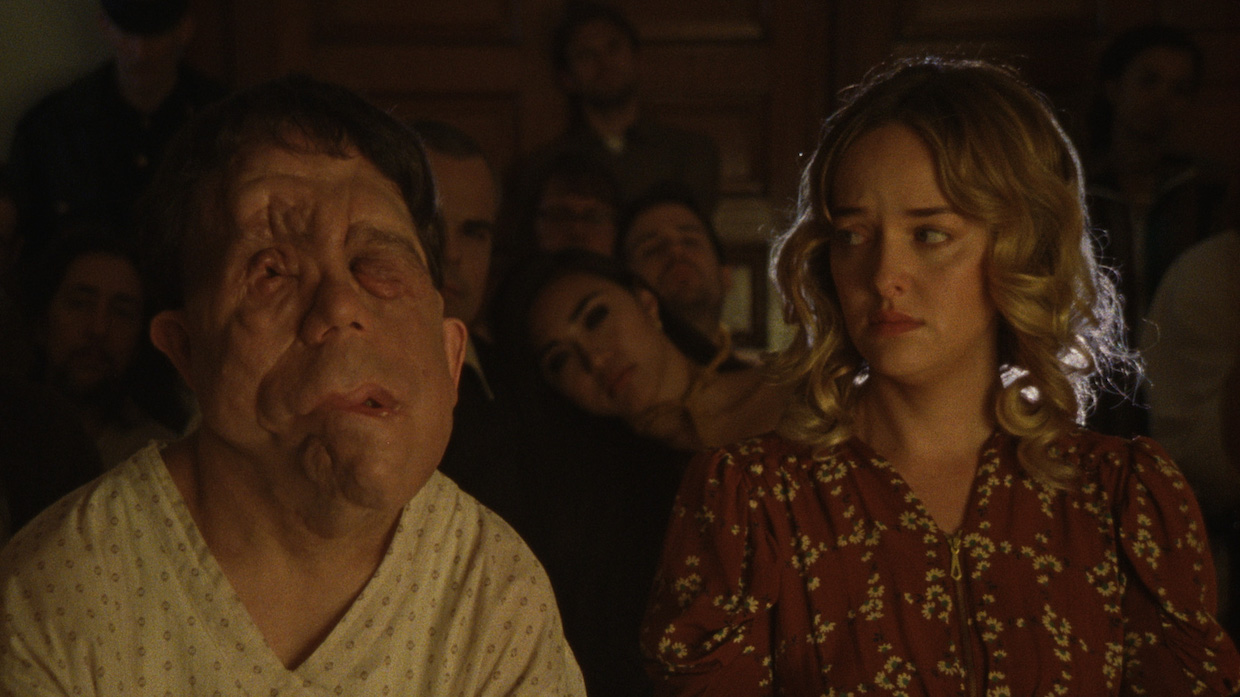 Adam Pearson and Jess Weixler in Chained For Life

The mix of films in the 10th edition of BAMcinemaFest offers isn’t totally unexpected: a significant plurality of Sundance premieres (tightly curated, or maybe more accurately culled), titles from SXSW and True/False, two North American and three world premieres. The programming, though, is tighter and more original than a simple survey of The Year To Date In Festival Premieres. (I have already written elsewhere about the following titles: América, Bisbee ’17 [which has been cut down substantially since its premiere], Clara’s Ghost, Crime + Punishment, Eighth Grade, Madeline’s Madeline, Shirkers, Skate Kitchen, The Task. Please please please do not miss that last one. I’ll wait to write about Support the Girls and Minding the Gap until closer to their release dates; they’re both great as well.)

Let’s start with the two world premieres I saw. Aaron Schimberg’s Chained for Life is an eccentric but not too-determinedly-so quasi-comedy in the movie-about-making-a-movie subgenre. Schimberg doesn’t try to disguise his reference points, instead leaning into them hard: lead character Mabel (Jess Weixler) presumably takes her name from Gena Rowlands’s Woman Under the Influence, a scene of cast/crew partying in a hotel lobby after a long shoot day is Beware of a Holy Whore but nicer, and the slow zooms and sprinkled bits of overheard irrelevance are unabashedly Altman. The plot, though ruptured by several unexpected resets (some of a unverifiably dream-like nature), is mostly low-key, tracking production largely through the ambiguously charged relationship between Mabel and lead actor Rosenthal (Adam Pearson). Pearson is the actor with neurofibromatosis and incredibly pleasant voice who made a memorable screen debut in Under the Skin; it turns out he’s also extremely funny.

I primarily enjoyed Chained for Life as a series of unexpected punchlines, many of which are commendably specific. The film-within-a-film is directed by a foreigner making his English-language debut. “I don’t think his accent is real,” someone says of the man referred to only as Herr Director, and it’s not: that’s cult-ishly appreciated former child star turned lawyer Charlie Korsmo, in his first part since 1998’s Can’t Hardly Wait, and his Werner Herzog-accented monologue on the glories of The Muppet Movie and Orson Welles’ climactic cameo is killer. I laughed very hard at Mabel’s response to an interviewer’s question: “Blindness is an illness…but it’s also a metaphor.” The camera movements are elegantly planned and blocked, moving from keeping-with-character tracking into static positions where suddenly the now-subjective camera is now being directly addressed, and otherwise giving evidence of thoughtful planning and execution. That Chained congratulates itself for being shot on 16, whose grain is clearly visible in the transfer, by having Herr Director yell about the advantages of rolling without stopping while shooting digitally, makes it a movie that’s funny for a very niche kind of cinephile. It’s 93 minutes, and only about 2/3 worked for me, but that other third (bits that unproductively perplexed me or fell flat) are evenly distributed throughout, so the film never hits a sustained rough patch. In short: that was fun.

Michael Koresky, Jeff Reichert and Farihah Zaman’s Feast of the Epiphany is a narrative that morphs unexpectedly into a documentary. This is not a boundary-blurring hybrid in the scene-to-scene sense: some intercut screen tests at the top confirm that the first part is overtly written. Abby (Nikki Calonge) prepares to host a dinner party: she’s known in her Brooklyn social circle for food that makes a dinner party invitation more desirable than usual. An insert shot of a bookshelf includes James Joyce’s The Dead, a clue about the tone of what’s to follow; there’s also an unexpected communal singalong—a reminder that Koresky is an expert on Terence Davies (he literally wrote a book on him), but one whose choice of song (Gershwin), setting (a small apartment with a manageable number of people) and relative lack of inebriation transforms the reference. The dialogue circles around, and eventually dives into, the grief of a loved one’s sudden death without overegged heaviness; line readings are theatrical but not flat in an amateur-actor way that could render the dialogue banal. (The many side quips are keepers: “You’re our generation’s Paul Lynde” is a good one.) The particular way the movie moves from its first to second half is so smart and thoughtful that I was momentarily dazed, an effect which faded; I don’t think the second half, while fine on its own terms, gets the job done. [1]

More than a year after its screening in nearly-complete form at last year’s True/False (the completely locked cut subsequently premiered at Locarno), Shevaun Mizrahi’s Distant Constellation is finally showing in New York. I watched it again during BAM press screenings, and what I wrote from True/False (subscriber-locked) will work here, slightly modified, as follows:

The cut I’d seen a few years ago, when I profiled Mizrahi for our 25 New Faces of Film, was impressive and a little bit formidable, a Hard Art portrait of a Turkish retirement home. My synopsis from then still stands: “Time stands still while residents reminisce. Outside, overhanging cranes and desolate construction lots testify to a changing area, but inside the residents are virtually alone with their memories. Slowly, a woman tells of her family’s suffering through the Armenian genocide; an old man lustfully recalls past sexual encounters and reads from Lolita; a now blind photographer becomes the photographed.” The milieu’s not a barrel of laughs, and subsequent shoots have added a welcome note of quasi-levity in the bleak-ish vein of Roy Andersson. In addition to the above characters, we now have two old men who spend their days being nuisances and amusing themselves by occupying an elevator, going from the basement to the third floor over and over while gossiping and deliberately making sure no one else can board.

Her own DP, Mizrahi also ended up doing the color correction herself, and the results don’t look quite like anything else I’ve seen: putrid streaks of yellow light saturate interiors, the elevator gleams an unnatural whiteness, and the whole building is cocooned in a color scheme creating a private world apart from the construction site across the way. Toggling from one character to another allows repeated returns to the elevator, but the film is bookended by the aforementioned site. Opening images of workers at sleep prior to the day’s work lead oneirically into the nursing home sequence: There’s a suggestion that we’re seeing a dream of death to come. Towards the end, there’s a conversation between an older construction worker who tells his younger colleague to get ready to pursue the path of ascending up the ranks. As a supervisor, he can make more money, and with that come perks: You can buy any fruit you want on the way home, and from there all of life gets sweeter. Inevitable bodily decay is nowhere in this projection of life to come: There’s a long sequence of a man lying alone at night, racked by endless coughing, augmented by coughs from an unseen denizen in another room. Contemplating life’s endgame isn’t something I like to do too often — we’ll all get there soon enough — but this is a both bracingly rigorous and visceral experience, with a steady gaze that acts as an unexpected calming agent. (The only thing I’d add to my notes from last year is that I understand why the synopsis itself might be a massive warning to stay away lest you get impossibly depressed, but it’s absolutely worth the risk.)

As someone who’s gone down way too many YouTube k-holes, Penny Lane’s The Pain of Others is the kind of movie I have all kinds of time for. The prompt is the controversial, possibly/probably just imaginary affliction Morgellons disease. With some news clips as buffer and context, Lane dives in via three YouTube accounts run by self-diagnosed sufferers. From her Colorado house, Tasha Lee often shoots outside; background circular fans when she’s indoors provide a constant, inadvertent but welcome visual disruption. mfromCanada1 stays inside, more often in isolated darkness than not. As for 4eyes2see, in some ways she seems like the happiest, or at least more naturally prone to an upbeat tone; her house is the most suburban and anonymous.

The footage is often dry—”Morgellons videos are boring,” one of the three concedes—and not cut down much, allowing you to really sink into a very particular type of contemporary vlogging genre. Between all the prodding at fibers growing from their skin and proselytization for proposed remedies, a narrative emerges from the contextual details you can pick out about the three women’s settings, the empathetic shout-outs they sometimes give each other and, most unfortunately, from their increasing paranoia. Predictably but sadly, it’s a small leap from worrying about a possibly non-existent disease (and the presumed conspiracy to suppress its official recognition) to invoking the red/blue pill of reality with the zeal of an MRA advocate, or mfromcanada1 complaining that “the alt-news has filled so many people with fear,” or Tasha Lee suddenly dropping chemtrails into the rhetorical mix. There’s overlap here with Dominic Gagnon’s Pieces and Love All to Hell, a fascinating hour-long compilation film assembled from female conspiracy theorists absolutely losing their shit on YouTube. I suspect we’ll be seeing a lot more YouTube-sourced docs that use the mass platform to dive into the rot of our present particularly hellish existence, and that seems necessary. (Anyone who wants to work on an assembly of every time Trump says “Where is [person x]?,” please get in touch.)

Finally, a few words on the shorts, which is where BAMcinemaFest’s explicitly articulated curatorial aims (which, broadly, have to do with advocating for necessary greater diversity in who gets programmed) most clearly fall into place. I was only able to preview half of the Kevin Jerome Everson program, and not all of the shorts fired for me, but he’s clearly an important contemporary artist working in the ever-marginal “experimental” space. Having a program reserved for him is absolutely the right move, and Rams 23 Blue Bears 21 is terrific, its simple premise (Everson stands outside a stadium as an almost all-black crowd files out) charging whiteness as disruptive and on-edge putting (read more from Michael Sicinski on the film here.) And while I wasn’t particularly keen on the medium-length documentary The Washing Society, the three shorts attached to it are terrific. Darius Clark Monroe’s Black 14 is a no-nonsense archival documentary reconstructing a story that really should be more prominent than being relegated to a Wikipedia sub-section. A plainly racist 1969 confrontation between a white football coaching staff and its black players is a dynamic that, obviously, still resonates; with no need for ominous music or narration, Black 14 lets all sides speak for (or indict) themselves. Adrián Gutiérrez & Grace Remington’s What We Have Built is a portrait of a NYC-relocated Mexican community raising funds to create infrastructure back home; initially seemingly in a straight verite-observational mode with a durational emphasis, the tone gets dreamier and more impressionistic as it unfolds. And Crystal Kaziya’s Edgecombe is an impressionistic portrait of a North Carolina town that moves structurally outward in three labeled sections (“House,” “Homestead” and “Community”), expanding from one person’s directly ankle-bracelet-, mostly house-arrest-bound except for work purgatory to an whole community’s lived experience. Programmers, take note of these three.

[1] This is a quasi-spoiler, I guess, but the pivot point interrogates the casual opening shots of a farmers’ markets, creating a direct link along the line of production between the purchasers of premium produce and how it got there. This is a very good way to interrogate otherwise implicit economic factors normally embedded into narratives with no interest in the larger systemic ramifications, which is not something every film needs to do but is nice to see.