“We Have a Contract with our Audience that We Need to Look Behind the Doors”: Marcus Vetter on His Davos Doc The Forum 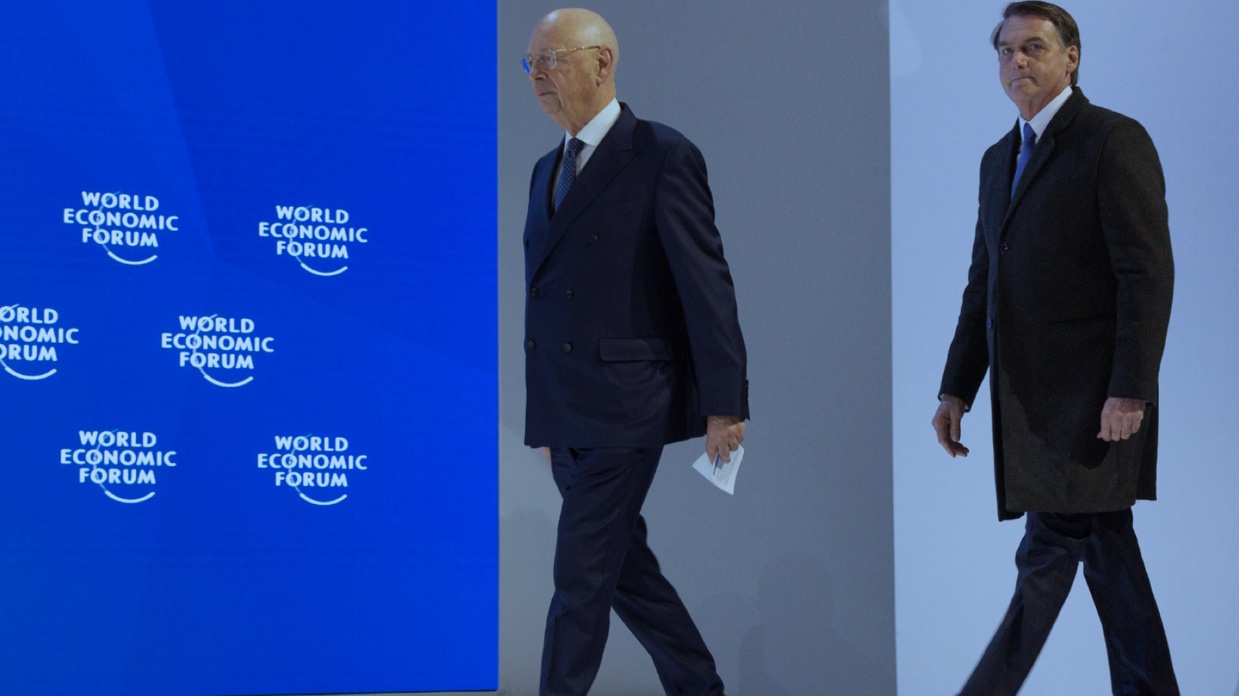 by Lauren Wissot
in Directors, Interviews
on Oct 28, 2019

When one thinks of the World Economic Forum many words come to mind: Davos, global elite, Bono. One term that decidedly does not is transparency. Which is what makes Marcus Vetter’s The Forum all the more remarkable.

With this fly-on-the-wall doc the German director (The Forecaster) becomes the first filmmaker ever to be granted behind-the-scenes access to the exclusive organization. Vetter follows the WEFs octogenarian founder Klaus Schwab from the run-up decision-making (Who to pair with Netanyahu? Who’s moderating the Bolsonaro? Who gets a souvenir cowbell?) all the way through the glitzy event itself (one attended by both the Amazon-pillaging president of Brazil and the teenage superstar/climate change activist Greta Thunberg, the only guest with the balls to call bullshit on her hosts). In the process he creates a cinematic microcosm that plays like a cross between Andrew Rossi’s The First Monday in May and Jesse Moss’s Netflix series The Family. One in which the rich and powerful, drunk on their own champagne-flavored Kool Aid, groupthink themselves into the pretzel-logic conviction that welcoming the “sinners” — those (almost exclusively white male) titans of industry that Jennifer Morgan, CEO of Greenpeace International attends to confront — in to be “redeemed” is somehow not simultaneously enabling them.

To discuss the process and challenges behind the doc (including placing a boom mic over Bosonaro’s head) Filmmaker caught up with Vetter just prior to the film’s world premiere tonight, October 28, at DOK Leipzig.

Filmmaker: So how did this film come about? How exactly did you get such unprecedented access?

Vetter: This came through Christian Beetz, the producer. He had a conversation with Klaus Schwab five years ago, in which he asked Schwab about a possible film about him and the WEF. Back then Klaus responded that if it were not a film only about him, but also about the World Economic Forum, he would possibly agree.

But another few years passed by, as the topic is so complex. It was not easy to find the right approach. In 2017 Christian approached me, asked if I could envision such a film. I had previously directed a film about the International Criminal Court in The Hague, and then a film about the financial crisis, The Forecaster, dealing as well with a very complex topic. I then went to meet Klaus Schwab, who is probably the most influential and most connected man in the world. He’s someone no one really knows.

I met a very interesting person, full of passion. For his age he looked young and agile. I was interested in whether he had a vision when he started it all 50 years ago. Back then his idea was that if you could talk with the most powerful managers on earth about ethics, could you steer the world in a better direction?

I could clearly see that he was passionate about this idea. He worked all his life on it. I asked myself, where did his idea eventually fail? Or did it fail at all? Did we the people have the wrong perception about this controversially-seen event? Why do we still not feel that the world has changed for the better? Would he admit it? In a time in which the elite are questioned by the electorate, by ordinary people, where trust is lost in the system, I thought this is the right topic at the right moment. It is a sign of a time, with a person who has dedicated all his life to it. I thought, yes, it is worth a film.

Filmmaker: The doc is indeed an intimate look at this elite organization, though I’m guessing there must have been some ground rules set by the participants. What did you push for, and what was strictly off-limits to your camera?

Vetter: I told Professor Schwab in my first conversation that I was a filmmaker working for cinema, and we have a contract with our audience that we need to look behind the doors. That we need to be there when he meets heads of states, politicians, prime ministers. And that we need to feel and understand what is at stake when he talks to them — what ultimately happens in these bilateral talks.

I don’t think he understood what I meant when I explained it. So I then asked him to watch three films I’d made, The Heart of Jenin, My Father, The Turk, and my recent film Killing for Love. I wanted him to get an idea of what we are talking about when we speak about documentaries for cinema. He and his wife Hilde watched all three films almost right away, and we met again afterwards. This was actually one of the main reasons why I agreed to make this film. He is such a busy person, but he took it seriously, and he took the time to understand where I am coming from. I appreciated that, and I could clearly see that he was not a superficial person. So I decided to give it a try.

We did the first two Saturday weekend interviews. I went with a small camera and my sound engineer Melanie to Davos in January 2018. It was great. We were allowed to shoot almost everywhere, and felt the trust that we were getting. But when it came to the bilateral talks between Klaus Schwab and certain heads of state, we had to leave after two minutes at every meeting. We were only getting the beginning of the conversation, when they talked about the weather.

So after Davos I decided to write Professor Schwab an email in which I communicated my concerns to him that it may be difficult to continue with the film that way. I got a response within the next half hour. He understood my concerns and apologized, explaining that he has to respect the confidentiality of his counterpart as well, but that he would try his best to persuade his interlocutor in the future.

After that we accompanied him to Hanoi, to the ASEAN conference, a Davos-like event in Asia. This time we were mostly allowed to cover all the bilateral meetings. One of these meetings was even with Aung San Suu Kyi, the head of state of Myanmar. So he held to his word, and trust began to grow between us. From that moment on the film started to make more and more sense to me. I was allowed to really experience his art of diplomacy, and so I signed the contract with Gebrueder Beetz.

Filmmaker: Your film The Forecaster likewise dealt with a powerful player in the global economy. What continues to draw you to this subject?

Vetter: I am totally aware that we are at a pivotal point in history. The elite is not totally in control anymore and people are losing trust in the system. The genie is out of the bottle, and you cannot put him back in again. Inequality has reached a point of no return. The elite, the establishment, is voted out, and people like Bolsonaro and Trump appear on the horizon.

It is so important to cover this hot topic in a film, even though it is not a film that takes an easy journey. Eventually we have to overcome some of our preconceptions. The elite may not appear as evil as we think they are. There are good and bad people. The film is asking the question, “Is there not maybe still a middle way, one in which everyone comes together instead of separating from one another?” Professor Schwab is reaching out a hand to Greta [Thunberg], who symbolizes part of the youth. He says that we are bequeathing to the youth a huge burden, the debts we’ve accumulated over the course of the last years. It is these very youth who have to pay it back, and to handle the issue in the future.

In my view it is the very debt that states and central banks have accumulated over the course of years that is the root of inequality and distrust. It’s the politicians who never want to be blamed for a recession when they are in power, and therefore manipulate every crisis away, delaying the reckoning for too many years. Now that the chickens have come home to roost, Klaus is trying to build a bridge to the young people, to maybe join forces instead of blaming one other.

Filmmaker: What are the tricks to crafting a cinematic work from an inherently un-cinematic subject? I notice your talking heads are smartly kept to a minimum.

Vetter: Keep it small and simple — go in with a crew that consists of three people maximum. For example, most of the sound I did myself. That way I could approach Bolsonaro in a very intimate moment, ask him if I could hold my boom with the mic over his head to get some sound bites. He agreed. And by doing that we were able to shoot a hilarious scene with Al Gore confronting Bolsonaro. You only get such scenes if you are not appearing as a big TV crew. That is the real beauty about documentary filmmaking. It is the authenticity we are always trying to uncover.

So we tried to get as many real scenes as possible. But never underestimate a good and calm interview either. I once made a film about a cinema in Palestine (Cinema Jenin: The Story of a Dream) without a single interview. But today I wouldn’t repeat it that way. I love interviews. You can use them in different ways. But, yes, never overuse them. Trust in your scenes and go for them when shooting.

Filmmaker: There are many memorable scenes in the film, from that one with Al Gore tepidly confronting Bolsonaro, to Greta Thunberg fearlessly calling BS on these corporate titans in her address. That said, I was a bit surprised that you personally challenged Schwab on his relationship with Monsanto so vigorously during an interview. As a documentarian where and how do you draw the line between strict cinema vérité and actually engaging with your characters?

Vetter: Oh, this is a very good question. I needed to do that to somehow address the concerns of the audience — so they could see I have the same concerns and maybe preconceptions that they have, but that I might draw different conclusions. I have to make sure that the film is never perceived as a propaganda piece.

In this interview we all made ourselves vulnerable. I am stuttering, the camera is trembling, and Professor Schwab is searching for words. It makes him look like a real person, and not as a coldhearted robot. It is a scene which has multiple functions. It helps the audience to deal with their own preconceptions, showing that they are not alone in their concerns. But it also presents Klaus Schwab in a vulnerable moment. From that moment on the film digs for a long while into the many projects of the WEF, and it shows that Dominic and Murat and a lot of the other people at the WEF are also trying hard to make the world a better place. They are actually a part of the elite that the electorate is about to vote out. And yet the film poses the question, “Do we really want that? Shouldn’t we try to take a second look?” The film, hopefully, offers this second look.