“There is a Lot of Necessary Nurturing to Be Found in the ‘Not Doing'”: DP Natasha Braier On Productivity Culture During Lockdown 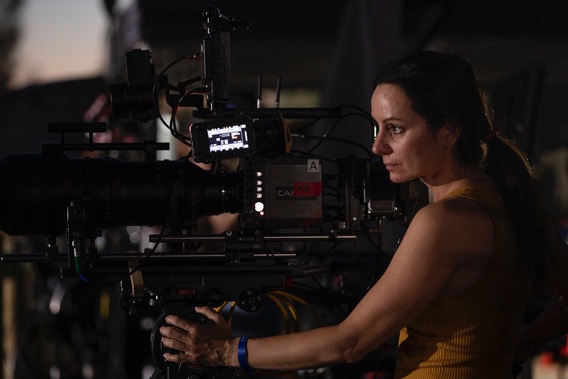 Natasha Braier has worked on a wide variety of films, from Claudia Llosa’s intense 2009 drama The Milk of Sorrow / La Teta Asustada to Nicolas Winding Refn’s ice-cold 2016 feature The Neon Demon. In 2018 she shot Gloria Bell, Sebastián Lelio’s English-language remake of his earlier movie Gloria. Last year she was director of cinematography on Alma Har’el’s feature debut Honey Boy. Braier’s work is distinguished not only by her vivid imagery but also by her acute psychological insight into characters and narrative.

Braier was in preproduction on Don’t Worry Darling, director Olivia Wilde’s follow-up to Booksmart, when the COVID-19 lockdown began. She spoke to Filmmaker from her home in Los Angeles.

Braier: I go to the supermarket once every ten days. That’s the only time I go out, the rest of the time I’m home, in my garden when it’s not raining. Doing a lot of yoga and meditation, resting, cooking healthy food. Just trying to keep the immune system strong for whenever we have to start going back out there.

Filmmaker: What were you working on when the lockdown began?

Braier: I was preparing a movie directed by Olivia Wilde. We were in soft prep, about to start the official prep. We were about nine weeks away. They were finishing up staffing the other departments. We had some creative meetings, shared some ideas, started to talk about what we would do. Who knows when we will be able to start again. It will be a while.

Filmmaker: Are you still in touch with Wilde?

Braier: We’re still having creative conversations, working more on the script. It’s good sometimes when you’re starting a project with a director and learning that you will have a lot more prep, you can talk a lot about the script and dramaturgy before you even start. But it’s not like I’m using a lot of time for that right now. The feeling of being overwhelmed is so strong, it’s very hard to focus on anything, really. I’m thinking in a couple of weeks slowly to go back into it.

Now it’s a matter of being patient with yourself, understand that you cannot always be making the best of the moment. Sometimes you have to grieve. Just rest, help your system recuperate. If your coping mechanism is to work and feel productive, okay. But what I think is not good is if you can’t manage to be productive, you don’t want to have an inner critic telling you you’re being inactive, you should be productive, you’re wasting your time. The whole world is in shock. It’s very normal that we don’t have the ability to be productive right now.

The idea of reflection, of going inward, is very important for all of us right now. I’m not talking just in terms of personal growth, but about how as a collective we are going to create a new space out of this. We need to digest what’s happened, meditate, come up with the ideas for a new approach to life. It’s not going to happen in a day. We need time to process. It will be challenging for all of us.

Filmmaker: We’re supposed to have the time now to get everything done that we haven’t gotten to before.

Braier: That’s a lie. Yes, we have time, but we’re human beings in shock because of what’s happening. All these people saying, “Now you can write your novel, give birth to that art you wanted to create, you can do this, you can do that.” That’s just making you feel bad that you’re not being as productive as you should be. This is the illness of our society, this is how we got to where we are. This pressure to be productive, be successful—for what? To be slaves in a machine? Working nonstop? Not having any time to appreciate life? Just work and work and work?

Filmmaker: But how do you keep your creativity sharp, how do you nurture it?

Braier: But to nurture is also to not do things, you know? There is a lot of necessary nurturing to be found in the “not doing.” We can’t go outside, we have to go in to ourselves. Just be inside of yourself, which is something in modern life that is very hard to do.

You know me, I do a lot of meditation, I usually spend weeks in silent meditation retreats without talking to anyone. So it’s not that challenging for me right now to be alone, in silence. The whole world could use some kind of meditation. Stop and reflect. Realize what’s important for us, what we want to do. And realize that the things that aren’t important, we don’t need to do anymore.

Filmmaker: How do you cope with the politics surrounding the lockdown?

Braier: I stopped watching the news in the last few weeks because I was getting very anxious and angry and disappointed in humanity. It wasn’t good for my immune system. I don’t need to follow the news day by day. I’m just going to concentrate on self-care and once a week catch up on what’s happening. If I’m consuming news that’s very negative then I will generate a lot of negative thoughts. Right now it’s about helping my neighbors and taking care of myself.

I started to practice what’s called the Wim Hof Method (WHM). He’s a Dutch extreme athlete who’s also called The Iceman. There’s a Vice documentary about him, The Superhuman World of Wim Hof: The Iceman, on YouTube. He’s also in “Cold Comfort,” an episode of The Goop Lab on Netflix. He uses a combination of meditation, breathing techniques and cold therapy, essentially exposure to cold. So you do some breathing exercises and then end your shower with cold water, every week building up to longer and longer spells of cold water. It really strengthens your immune system. It also acts as an anti-depressant and helps reduce anxiety. It gets you in a good mood, you get high on your own oxygen. I’m in an online workshop, but there’s also a free app [Wim Hof Method for Mac and Android] which has the breathing exercises. It’s a really great way to start the day.

I do these exercises  the first thing in the morning and feel good for a few hours. If you are consuming news all day, it’s like you’re eating junk food all day. Of course you’re going feel sick. You need to be careful about what you ingest.

Filmmaker: What about your income? Are you financially secure?

Filmmaker: Is this a good time to try out equipment? Maybe do some lens tests?

Braier: Fuck that shit. Who cares about lenses right now? I’m sorry but there are bigger things. I would rather help people out, try to stop 5G in my neighborhood, rest. Plus, I did all my lens work with Dan Sasaki in the weeks prior to the quarantine. Panavision is closed now.

Filmmaker: Are you watching anything?

Braier: Not much. I binged BoJack Horseman, watched the whole thing. But now I’ve stopped, I’m not really watching anything. I’m reading and meditating a lot. Meditation really helps, it’s a good tool to observe your thoughts. If I get very sad, worried, or go into a fear mode, I can use those tools to step back and fight bad thoughts when they come. I strongly recommend checking out the Wim Hof method. It only takes half an hour, maybe ten minutes in the beginning. It has really has really helped me and I think it could help a lot of people. He’s crazy in a very good way. He trains people in a few days. They arrive, and Day 1: breathing exercises, cold shower. Day 2: more exercises, longer cold shower. By Day 5 they’re climbing some mountain in Switzerland, wearing shorts in the middle of the snow, happy, singing. I want to be one of them.