“We Read Adam’s Blog Every Day… So It Was Like a Daily Script”: Pia Hellenthal on Her Social Media-Themed Doc, Searching Eva 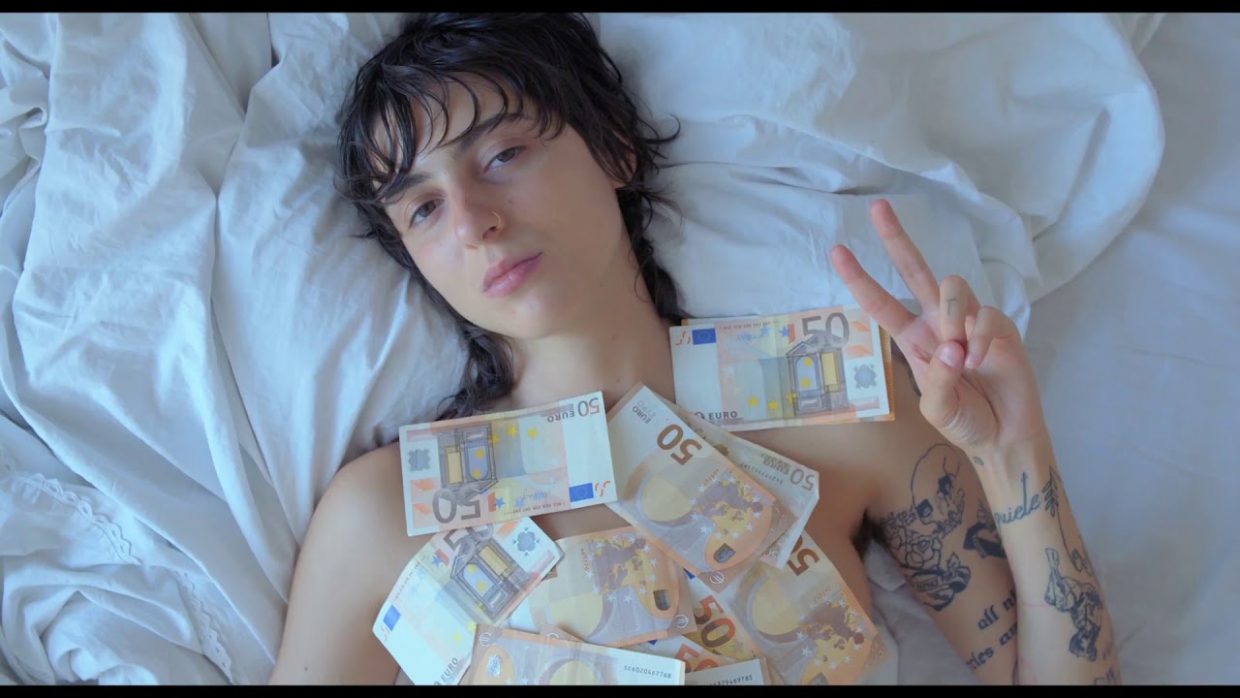 by Lauren Wissot
in Directors, Interviews
on May 20, 2020

Having made my “Best Yet-to-be-Distributed Docs 2019” list, Pia Hellenthal’s Searching Eva, currently streaming on Mubi USA and with a virtual release upcoming on June 2nd through Syndicado, can now be shifted to the “best docs of 2020” category. My assessment of this “portrait of a restless, gender-ambiguous, philosophical millennial who documents her entire life — from fashion week to freelance sex work —  online” might not make the film seem like must-see viewing. But that’s precisely the point — and what makes Hellenthal’s talent all the more apparent. As an often cynical critic who couldn’t care less about a globetrotting poet with an Instagram account, I found myself absolutely riveted when I accidentally discovered the film at last year’s CPH:DOX. As I wrote at the time, “Between Hellenthal’s exquisitely composed shots and her titular protagonist’s surprising bon mots (Eva longs to “go to the beach or start a revolution — depends on what my friends are up to”),” this “addictively cinematic” doc is “also pure poetry in motion.”

Filmmaker took the opportunity to find out more about this unusual work of cinematic nonfiction from its Cologne and Berlin-based (and Teddy Award-nominated) director a few weeks prior to the doc’s digital debut.

Filmmaker: Since you first encountered Eva — who is now Adam — through his blog, the poetic words, what made you think this person’s life would make for such visual cinematic material?

Hellenthal: In the beginning I was not sure we would make a film at all. I was just very much inspired by Adam and his blog. The aesthetic of the pictures was part of it. Adam looks great. And the constant change of looks — along with the surroundings, the flats, the countries — as much as the people he hung out with gave us the feeling it could be really strong visually.

I assume it would have looked more “naturalistic” and less exciting if we simply went with a handheld camera that followed him around. So early on we made the decision to go with set framings — we called it “performance shots” — where he would look in the camera, almost like highly stylized versions of a selfie. Plus we tried to capture the everyday life in arranged tableaus rather than in moving closeups.

This is partially my taste, but also a decision to tie the visual form to what we wanted to express. We tried to capture his life in a way where you cannot be totally sure how much is performance, how much is staged, how much is “real” or not. Is it directed, and who did it — was it Adam or us? We wanted these questions to be part of the experience. The film says, “I am aware that I am a film, a construct.” This made sense for us, as Adam said the same about the very idea of identity.

Filmmaker: While most documentarians cite time spent with their characters as crucial to building trust, you had your shooting team follow Adam around the world before you’d ever even met him in person. How did knowing your protagonist only through those online musings affect your own filmmaking process?

Hellenthal: It is true that we started to shoot straight away without the usual careful meetings to build trust. We had a feeling he would not mind if the camera was on or not, and that turned out to be correct. On the first shoot he said, ”I don’t understand this concept of privacy. If you behave like an ass and do not want to be public with that, just don’t behave like an ass.”

We read Adam’s blog every day during the time of shooting, so it was almost like a daily script. We could take out the parts that excited us the most. We would read what was happening in his life, and if it fit with what we were trying to express we met up and shot — even if that meant going to Mexico. Sometimes Adam would also leave us little hints on the blog. We actually learned how he felt about the shoot and us that way. During both the shooting and the editing he would always leave little synopses of the film online — in this phase where we were still totally in the dark as to how the film would turn out. (One ended up in the film quite close to the end, “This is a documentary about a girl…” Also, “the reason why they made a movie out of my life is that one day im shooting up in a public toilet and the next im bleaching my teeth in a jacuzzi” (2017). And, ”A film about a girl on a process of self abolishment. The girl isn’t me cause representation is a lie. But Lies can be good. Lie more y’all. Cheat, Steal, Hide in the cracks.” (2018).)

Filmmaker: How did you get the financing for this globetrotting project, though? The concept of trailing an Instagram star who wanders aimlessly around, defying concrete definition, just seems like it might be a difficult sell.

Hellenthal: In the beginning I used my own money to shoot a first block, which we edited into a sort of “teaser.” And we spent a lot of time developing a concept that sounded good. It is true that in the beginning we were ridiculed by many people who were like, ”Why do you care about this narcissistic internet chick?” We would not show the teaser to anyone that we did not completely trust, not until we felt there was a solid written concept. For us the film was very philosophical and political, and we knew the written concept needed to express this, [or] else the “surface” would be judged too quickly.

Once we had that we applied for a development fund (Gerd Ruge Stipendium), which thankfully gave us the money. We have a very good film fund (Film und Medienstiftung NRW) in North Rhine-Westphalia, the region where I am from. They support young experimental filmmaking. They gave us the first push, and later on a big chunk of production money. After receiving the development fund, which is quite prestigious, money actually rained quite quickly. My producers are well connected and respected in the documentary world, so that also helped. The ZDF Kleines Fernsehspiel, which co-produced, are known to support young, more out of the norm, film projects.

We were lucky. But as I said, we worked quite hard to be taken seriously in the beginning. But apart from all the work, I guess what sold it in the end was the usual — the sex work, the drugs, the subculture lifestyle. Plus, the “modern touch” of the internet era.

Filmmaker: Adam doesn’t believe in the concept of privacy, which makes him both incredibly accessible and constantly performative. Did you ever worry about getting too much style and not enough substance?

Hellenthal: I cannot remember having this fear during the shoot because I always felt there was some big existential question behind it. This idea of deconstructing identity felt universal, and also quite political. We’d spend hours racking our brains about it.

But when we started to edit with our first editor — we later switched to work with Yana Höhnerbach — I was confronted with this doubt that the material would not transmit substance. It turned out to be a very long and hard process. We first had to get to the bottom of what we were trying to express, and then to find the “practical way” of doing that — by manifesting it in the form of the editing rather than it staying an abstract thought experiment.

Filmmaker: The film is a nonlinear story, mirroring the internet itself, so I’m guessing the editing may have been a bit tough. How did you put all the pieces of this protagonist’s scattershot life together to create a cohesive whole?

Hellenthal: We really racked our brains about this. I think the first push in the right direction happened during a workshop at dok.incubator where I was questioned, in a therapy kind of way, about the core of the film. The editor Yana was present, and it really helped us to unlock many things. Our tutor Joelle Alexis also gave us a wonderful tip. She said to treat all the elements — voiceover, the comments, performance shots and footage, etc. — as musical instruments. To try to improvise, as we all knew there could not be a classical narrative to carry us through.

Yana then improvised, and we started to find this mechanism of scenes, comments, voice — all circling around topics rather than following a cohesive and chronological narrative. All of the topics — from work to body to gender — connected to identity. Which was the main thing for us. So when Adam is talking about the dad, for example, we would never just put it in as a background story. We’d tie it to the topic of “work” and draw a larger narrative about it.

At some point we also understood that the comments were almost functioning as an antagonist, as it is the gaze — the audience’s gaze — on Adam that develops throughout the film rather than Adam himself. So we ultimately used this as the thread to guide us.