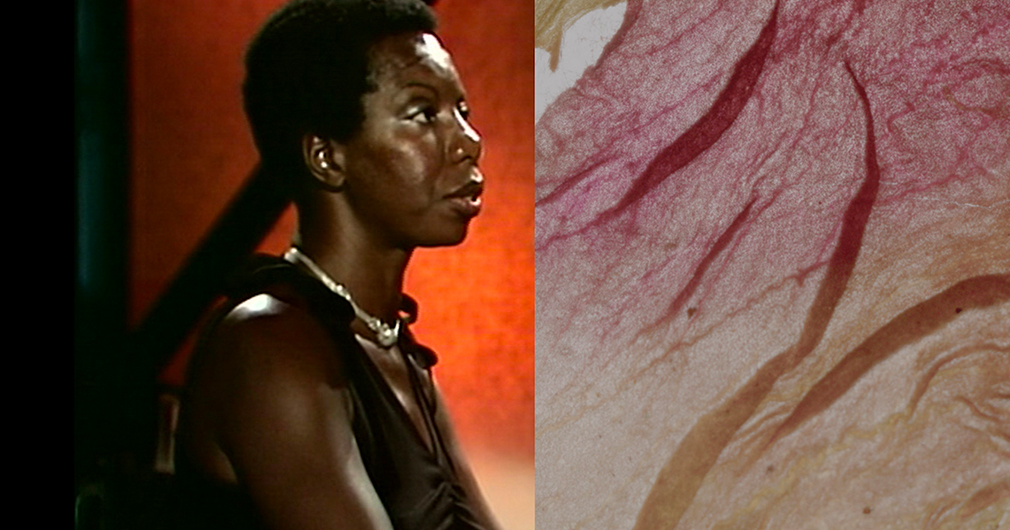 A lot of the film industry has been sitting around waiting for things to return to “normal,” a normal that seems to be receding further away by the day. None of the films on my list I saw in a theater and access was both easier (some faraway fests I could attend from my bathtub for the price of a regular movie theater ticket) and harder (geo-blocking, ticket caps, outrageous virtual pass prices). Even in the face of all of this, the number of women working in the film industry continued a steady incline. Though many long for normal, remember: normal is not what got these women behind cameras, normal doesn’t make change happen.

Warning: Indie-sci-fi-it’s-complicated-rom-coms are a genre that I knowingly have a soft spot for! Save Yourselves! stars Sunita Mani (Su) and John Paul Reynolds (Jack) as a millennial couple who, in an effort to unplug from their over-connected lives, turn to a friend’s empty cabin upstate. As their self-imposed phone detox begins, the two are forced to face themselves, unaware of events happening beyond their quasi-rustic retreat: deadly, tribble-like aliens have descended on earth. A battle for survival ensues. Underneath the privileged punchlines and toxicity of internet bubble-life, a murky (hopeful?) future emerges, swaddled in a warm blanket of contemporary nostalgia and smoothly blended special effects. The film premiered at Sundance in January but foretold of the months to follow: isolation, a deadly intruder— there are even sourdough starter jokes.

The absence of Rob Rich is an omnipresent truth in the everyday lives of Fox Rich and her sons. No father to see the graduation, no husband to share in milestones — passing of moments, gentle and sharp, scarred by the prison industrial complex. The documentary is rendered in a serene low-contrast gray with voiceover mainly from Fox narrating her life in an impactful, dreamy, intimate-yet-mythic storytelling tone. Interjections of home-video diaries from hours of footage Fox personally shot for her husband over two decades are folded into the present, a present that is witnessed by director Garrett Bradley (and edited with an easy continuity by Gabriel Rhodes). In Time, modes of storytelling collapse on one another towards a greater purpose, reminding that the documentary form is an illusion just as much as the concepts of time and freedom are. Society is bound by narratives even as real lives are lived behind them.

Spring Blossom captures the superficiality, confusion and complex joy of a young girl’s sexual awakening. It gets to that tingling warmth of first love and buzz of attention that feels simultaneously euphoric and tragic. The character of Suzanne exudes this energy as she eyes an older, immature romantic, a traveling actor performing at a playhouse in her Parisienne neighborhood. She stalks his periphery hoping to manufacture a meeting, waiting for the chance to be noticed. Though the film doesn’t go too deep, it does skim the fleeting emotional landscape of growing up, the painstaking process of balancing womanhood and girlhood through the tuck of a shirt and a smear of makeup. A few sporadic and muted dance sequences breeze through with a gentle chasteness that draws a smile. It’s a jumble of longing that can only untangle after one first finds themselves.

7. There Will Be No More Night (dir. Eléonore Weber)

“There is always someone behind the camera. Even when we think there is nobody…There is always someone watching. Someone who records and who is watching.” So warns the narrator of this found-footage documentary. The film is composed of images from military helicopters, hovering above war torn countries such as Syria and Afghanistan, watching and waiting to strike when wrongdoing is determined below. The film’s voiceover is measured in delivery, centering on a remembered interview with a helicopter pilot, questions and justifications rattle. It is a surveilled digital archive of the recent past, a record of life and, in some cases, death monitored “over there.” Watching through the crosshairs implicates the viewer in the act of war and the act of digital surveillance in a startling way. The truth is, most people are implicated in these acts daily, and ignorance is just another form of self preservation.

Cecilia Aldarondo’s documentary Landfall looks at Puerto Rico in the aftermath of hurricane Maria. The film has a level of intimacy unlike any other, with moments of people candidly recounting stories, opening their phones/augmented memories for the director and the audience with a tender intimacy. A dinner party becomes a place for sharing, friendship and processing. A drawn map overlays the screen to give a sense of place while reinforcing the human hand behind histories. Moments of archival footage invade the screen for brief, wonderous intervals to explain and contextualize. The entire film has a poignancy and caring but also an edge of fear and concern. The past never really washes away no matter how many new coats of paint cover it (or how many opportunistic American bitcoin bros lurk). Human resilience and collective power should never be underestimated.

Having been named a young playwright to watch in the NYC theater world, Radha (the film’s character, not the director) is now approaching 40 with little to show. She teaches high school students, she panders to an audience itching with white guilt, she searches for her voice. Small montages are dropped in throughout the film, which becomes an expansive frame giving assorted voices a space to breathe on screen. These moments add another set of perspective but also tender backstory about the characters (and possibly their lives off screen, a few photos worn with love that felt like someone’s home). These glimpses break through the coming-of-middle-age dramedy with an inhale of self and an exhale of expectation, a look inward towards authenticity and personal voice against a world trying so hard to strangle it. Being true to oneself is the story, and struggle, of an artist at any age.

To dismiss this film as simply an adoption drama undercuts the poignancy of its characters and the superb performances of its actors. Satoko desires to be a mother, a dream diminished by her husband’s infertility. Hikari becomes pregnant as a teen releasing her child to an adoption agency at the urging/embarrassment of her parents. Hikari moves from riding her bike through a shower of cherry blossoms full of hope and youth, to a crumpled ostracization, longing for her lost son. Satoko is a proper adult, the instinctual love for her son flashing across her face as quickly as the fear upon hearing Hikari’s voice on the phone. Each woman (in addition to the supporting female roles) embodies a very different attitude on life, each leaning slightly into the next, looking for ways to complete themselves along a complex spectrum of mothering while radiating a deep sense of compassion.

How does one make an entertaining yet respectful retelling of the Harvey Weinstein scandal? Apparently, by fictionalizing it, keeping the predator in the margins and focusing on the life of his assistant, a young woman forced to juggle his schedule and the parade of promising, pouty-lipped women brought to the office. The film unfolds in a single day in the life of an imagined assistant named “Jane,” essaying her pre-dawn travel to Manhattan to an office awash in an pallor of sickly lights, the rolling mundanity of clerical tasks, and, finally, her lonely exit into the night. The tacit acknowledgement, and lack of action, regarding her boss’ predatory behavior is a seedy filth that lays across everything, quietly permeating all levels of workplace culture. The foreboding imbalance of power in abusive working relationships thrives, along with the structures that support them, all while maintaining Green’s keen sense of dark, stylized intrigue.

Gary’s film, a 42-minute piece part of a larger three-channel series and 2020 gallery installation titled The Giverny Suite, moves along a few different modes of vision: hand-painted celluloid, women-on-the-street interviews posing the question, “Do you feel safe in your body? In the world,” viral videos, lush present-day scenes from Monet’s garden — a frenetic aesthetic-switching rapidly pushing forth intersectional themes with poise and purpose. Gary challenges the viewer, using her film to take control —  to take up space—  in the mind and heart of the watcher, working to subvert the inclination to gawk. For me, the film instills the sense that the best way to fight the forces of oppression and indifference is to express one’s feelings through whatever means necessary. Film and art become a boundless political act, a place where nothing is destroyed, only created.

Eliza Hittman is the master of the subdued coming-of -age epic. Her films are born out of realness but steeped in a symbolic artifice that makes them gigantic and everlasting. Autumn is a young pregnant teenager looking for options in her gray Pennsylvania town. With the guidance of her cousin, Skylar, the two hop a bus to NYC to seek out an alternative to motherhood. The dialogue is sparse, images and actions speaking loudly. Cinematography by Hélène Louvart presents a classical beauty: Skylar facing a line of abortion clinic protestors looks like a modern religious Renaissance scene, the floral motifs in a waiting room dusty, gross expressions of femininity. The film is devastating, beautiful — elevating the mundane, it doesn’t dwell and it doesn’t overbear. Never Rarely Sometimes Always calmly, rationally expresses the multitude of ways that circumstance can slowly erode choice and how moments of self determination are sometimes the only avenues for survival.

Frances McDormand is cast as Fern, a “houseless” widow who takes off on the road to join the camper-life nomads following seasonal work throughout the American West. McDormand appears alongside a cast of actors and non-actors, the latter real life itinerants living out the lifestyle the film portrays. Moments of reality break through the fictions — a hug from a departing friend feels beyond a script as a newly shared memory is made, caught on film with an unfathomable, tear-inducing heart that even seems to give McDormand pause. The stifling van life is engulfed by massive, earth-shattering landscapes, one of many dualities underscored through the superb vision of director Chloé Zhao. Fern’s perpetual motion is in part caused by her own wanderlust but also reflective of much larger conflicts and forces in today’s America, a place that is at once rapidly progressing but that also continues to loosen its grasp on humanity.