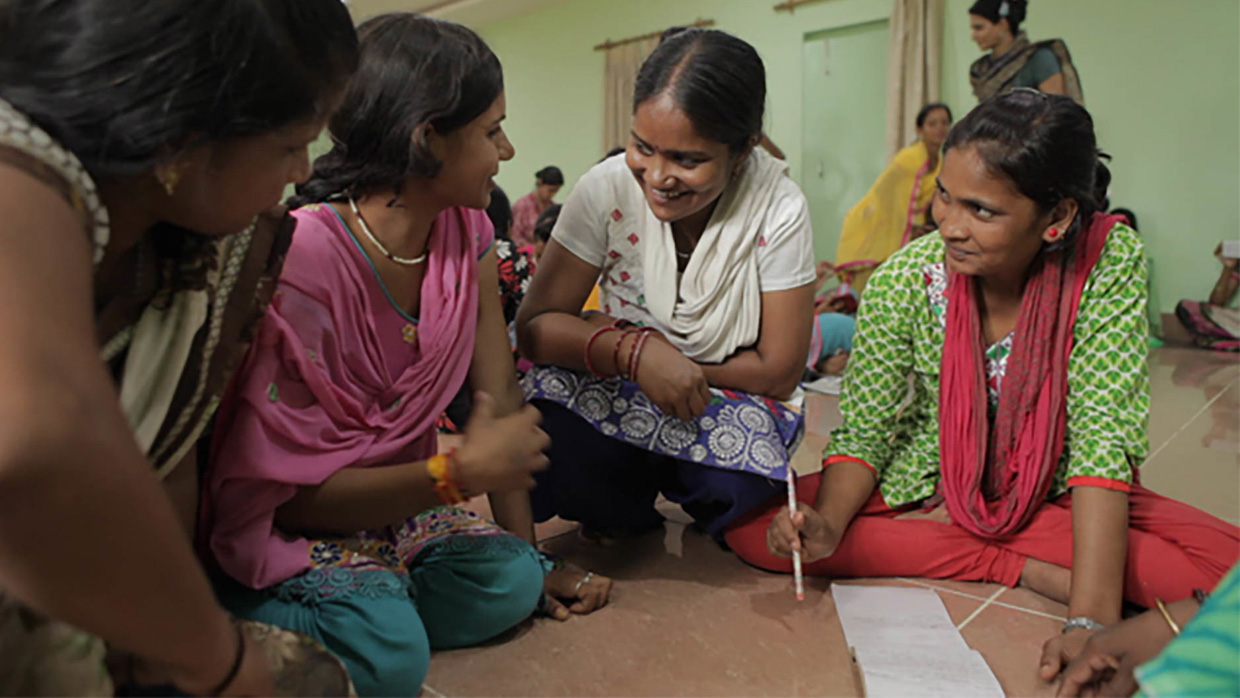 Rintu Thomas and Sushmit Ghosh’s feature debut Writing With Fire painstakingly follows Khabar Lahariya, India’s only all-female news network, as they transition from print to digital and challenge the caste system every step of the way. As a director duo, Thomas and Ghosh also took the massive undertaking of editing and producing their film, with Ghosh also acting as one of two cinematographers. The duo share their editing process, what it was like to respectfully but intimately capture the lives of the women of Khabar Lahariya, and reframing the image of Dalit women through editing.

Thomas & Ghosh: That was a decision we took about two years into the filming. One of the things we decided early on was to cut scenes ourselves after every shoot schedule to see how the scenes are playing out when pieced together. This helped us enormously in realizing we were telling a deeply intersectional story. While there were many paths to take with all the layers of characters, storylines and themes, we had the clarity on which ones to follow through. We’ve both been editors on our previous indie shorts so finding each other on the same page (broadly!) was a nice, reassuring feeling. We followed that instinct and became the editors of our film.

Thomas & Ghosh: In parallel with the shooting, when we were editing short scenes, we had edited each as a story of its own—with a beginning, middle and—end wherever possible. With four years of developing individual scenes, we were able to put together a very rough five hour assembly! The challenge was that these scenes were not really talking to each other. They were like short stories in an anthology. This was unsettling because we had a very clear idea of what direction each storyline was taking and what the interconnections within the larger narrative were. So we dismantled the rough assembly and started relooking at every scene with the questions, “from whose perspective is this scene being seen?” and “what am I telling my audience through this moment that’s playing out?” This led to many slow but brilliant breakthroughs that gave birth to the final cut.

The characters in our film are Dalit women journalists who are chipping away at one of the cruelest systems of social hierarchy and exclusion. So when these women empower themselves to become the voice of those who are voiceless, they do so by belonging to the same reality of the people whose lives they are reporting on. Our key goal was to make this connection between the personal and the professional, the micro and the macro picture omnipresent throughout the film.

Tied to this was the process of filming characters who are themselves imagemakers. From being a print newspaper for 15 years, they were making a transition to digital journalism and we were happy to have caught them at this interesting cusp. Semi-literate rural women who had never touched a smartphone were now discussing digital workflows, talking to each other in the language of long shots, close cups, storyboards. So very quickly they realized the power of being both behind and in front of the camera. It was important for us to give the viewer a visceral experience of what they were capturing through their cameras, quite literally seeing their reality through their eyes. Blending our footage with theirs at the right moments, in a seamless way, was a goal that we were mindful of while editing the film.

Another goal has been to keep the lens of the story intimate and one of dignity. The representation of Dalit women in our popular culture is that of oppression and victimhood. The image of a thinking, articulate Dalit woman with agency is completely missing. We wanted the film to tell the story of modern Dalit women as colleagues, bosses, leaders and risktakers. Our characters articulate a bold vision for the future and we knew very early on that this had to be an underscore for the edit.

Thomas & Ghosh: We spent over a year and a half editing Writing With Fire.

When we had a second assembly, this time a crisper two and a half hours, we felt it was the right time to bring on board an external consultant with a fresh pair of eyes and perspective to the story. In our blue sky thinking, the ideal person was a female editor, someone comfortable working with a subtitled international film and had a body of work across fiction and non-fiction. We spoke to many international editors, a process that took almost a year. We found our perfect fit in the amazing German editor Anne Fabini—she fit every box beautifully. More importantly, she intuitively understood the underlying themes of the film. The initial plan was for her to spend two weeks in India with us working on the rough cut and we’d follow up with two weeks in Berlin, closer to picture lock but then came the pandemic. What was supposed to be a four week engagement turned out to span into many, many months over Skype, Zoom and excel sheets, but it was fantastic—rigorous and intense.

We would share our versions of the scenes with Anne and she’d give us notes on how she was responding to the material. We find conversations an essential part of the editing process. Whenever we felt stymied, we’d step out of the edit bay and talk—thoughts, anecdotes, have a fascinating way of decluttering. Plus, with Anne she always gave us more questions to think about than offering answers. We’d absorb her suggestions, rework the scenes and hop onto a video call to flesh out details and talk about the heart of each scene. During this process, we focused primarily on interweaving the personal and professional worlds of our characters. Sometimes just by keeping a few frames or letting go of a sentence, the emotional weight of a scene changed completely. So this approach really helped to focus on bringing out the essence of every shot, every scene in the film.

We then started to focus on cutting the proverbial fat from each scene and we still marvel at how the 90 minute version of the film has almost all the material that the long assembly had, barring just a handful of scenes.

Thomas & Ghosh: We cofounded Black Ticket Films in 2009, a company that is invested in the power of non-fiction storytelling. Over the course of the last decade, our work has included branded content, advocacy films, social impact films and a bouquet of nonfiction content for multiplatform distribution. Right from our first independent short, Dilli (2010), we got behind the edit and found great joy and satisfaction in the process of shaping the story. So this collaboration as coeditors continued on all our independent work.

We’ve really enjoyed Errol Morris’ earlier verité films—the way he uses careful design, during filming, interviewing and editing, as a distinct style that defines the narrative of his films. We love design and while Writing With Fire is a very different film, the element of style and design in stitching a film together is of great interest to both of us. The films that speak to us most are the ones which offer an opportunity to learn about ourselves through other people, who go from being strangers to extremely relatable people in a matter of 90 minutes or less.

Thomas & Ghosh: Final Cut Pro. It’s a system we’ve professionally grown up on, so it was the most natural software to go to.

Thomas & Ghosh: The opening scene was the most difficult. This has an anecdote to it and let us start there.

When we landed up in Uttar Pradesh on our first recce-shoot way back in 2016, the first day of filming was us shooting the women in a meeting, where they had all come together to discuss shifting from print to digital. We were filming with two cameras and two mics, in a half lit attic space, with over 20 women sitting in a circle, discussing and debating this big shift in their professional lives. It was challenging to shoot but we realized soon that this scene had to be set up early on in the film. It had the context and the framework for the entire story—print journalists, rural Dalit women, with nearly fifteen years of experience deciding to shift to digital journalism, a medium they had no idea about. And that this was an experiment that could fail, leading to consequences for everyone.

We went through 15 separate drafts of this scene. What was also critical was to set up the stakes and to set our key characters up within this scene—because they are the ones who will lead us on this journey. What stood at nearly four hours of filmed footage was eventually condensed to 2 minutes in the film and we’re satisfied with how the scene plays out.

Thomas & Ghosh: Writing With Fire is steeped in its immediate culture, geography and history. It was very important to us that the authenticity of the story is not compromised in the pursuit of making it a film that can be accessed by an international audience. And that was a very delicate balance. There was a temptation in the earlier drafts of the film to explain certain contexts, character motivations. Throughout the long period and process of making this film over five years, we never allowed ourselves to have footage fatigue. So every time we went back to the footage, there was something new hiding in there, which we had ignored earlier or thought was not relevant enough. The footage remains the same; you’re just asking a different question every time. So with every edit pass, we experienced the narrative finding its own voice and the need to “explain” started diminishing. Now that the film is ready, we can see very clearly what edit decisions led to a story that’s unique yet universal.