“I Knew This Film Was Going to Be a Little Out There”: Editor James Crouch on The Blazing World 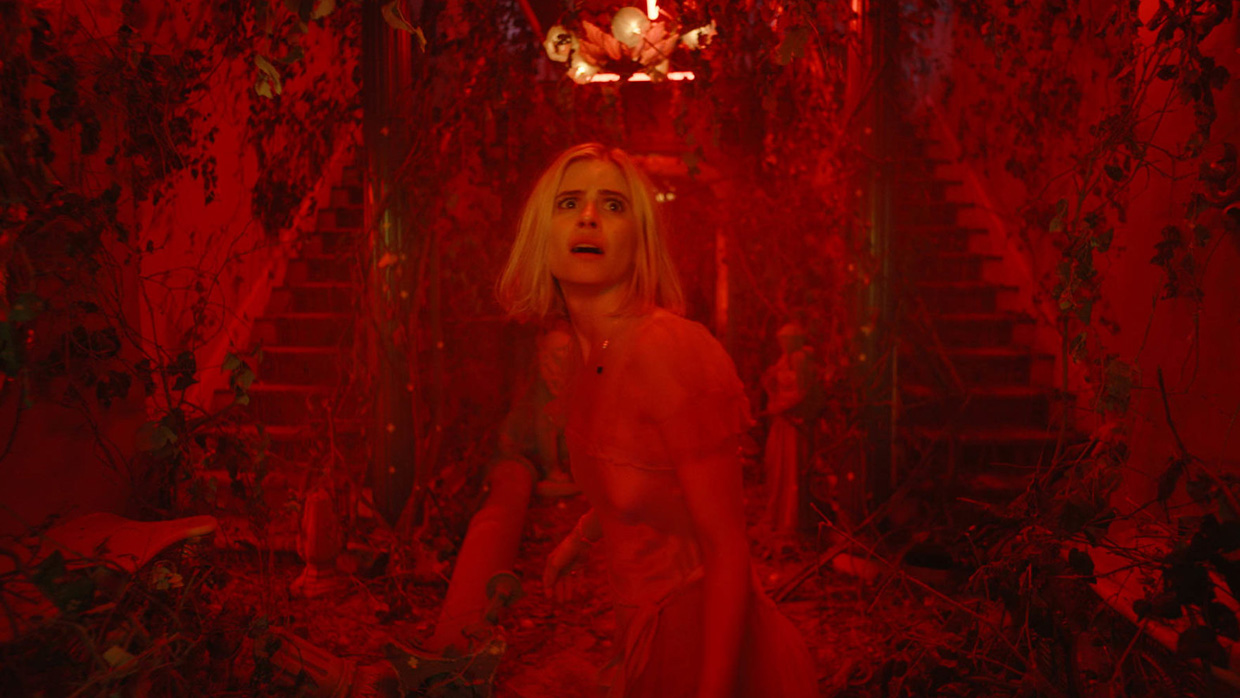 Carlson Young’s feature debut The Blazing World features the director as her own lead. Margaret has recurring nightmares hearkening back to the drowning of her sister when she was a child. On the brink of suicide, Margaret finds herself in an alternate world where her sister may yet live. Editor James Crouch discusses relying on simplicity on an otherwise complex movie and the editing choice that made Young cry.

Crouch: I met producer Brinton Bryan on our last film together, 12 Mighty Orphans. He ended up liking my work and thought it would be a good idea for me to meet Carlson for The Blazing World. I read the script and absolutely loved it and said I was in before Carlson and I even met. Brinton then connected us in July via Zoom and I was hired shortly after. Once she came into the edit room we immediately became fast friends and well suited collaborators.

Crouch: Early on I knew this film was going to be a little “out there,” and I felt pressure to match that tone. But instead of overthinking sequences I decided to keep it simple and cut it as I would any other movie. Once Carlson joined me, we really started playing with different creative ideas. Techniques that are usually considered to be strange or dated, such as jump cuts or long dissolves, became part of our editorial language. The entire process went extremely smooth and I believe we locked picture in 10 weeks, which included production.

Crouch: These goals were achieved because Carlson is a director who knows exactly what she wants. I was so impressed with her precise and accurate decision making. For this to be her first feature film… I was in awe. As far as screening, we didn’t really have the chance. We couldn’t screen because of COVID, so we relied on feedback from a few people within our team.

Crouch: I started editing for a director named Andrew Shapter here in Austin, Texas back in 2013. He quickly gave me more and more opportunities and bumped me up from assistant editor to editor in a matter of months. Seeing that is somewhat rare in this industry, I ran with it and continued my career in Austin.

As far as influences, I consider Sandra Adair an editor that I look up to and admire. She has edited every single Richard Linklater film since Dazed and Confused as well as many more amazing films. Over the years she has become a mentor and friend. What I specifically love about her career is the way she cuts dialogue driven scenes. She cuts for emotion and impact while maintaining a sense of simplicity. That is something I try to emulate on each one of my films.

Crouch: I use Premiere. I came into the post-production world just as everyone was jumping ship from final cut to Premiere and it was a software that I really took a liking to.

Crouch: I would say the weeping room sequence. Everything else in the movie is cut pretty much to script, but this sequence I told Carlson I was going to try something a little different. I spent a week or so crafting it and started incorporating ad-libbed dialogue as voice over from one scene between the mother and daughter that was never intended to be used. Towards the climax of the scene I started to build up to very fast cuts while also aiming to bridge together all of the images of the blazing world.

I was nervous to show Carlson, thinking that I may have over done it, but am happy to say that she cried upon the first viewing and had very few notes.

Crouch: This was the first film I have worked on that was very VFX heavy. I think there were close to 300 shots and the film is only 97 minutes. It was tough at first cutting these scenes with green screen everywhere, but I got the hang of it with the use of sound design, which helped bring the scenes to life before we could get our vendors to start their work.

Crouch: At first I saw this film as just a crazy acid trip cult type film, but as the film started to come together I realized it was so much more than that. The movie is open to one’s own interpretation. In fact, there are many parts of the film that only Carlson can give you a straight answer on because this is her story she created, which I really think is cool. Sometimes movies really spell it out for you, and this one does not.