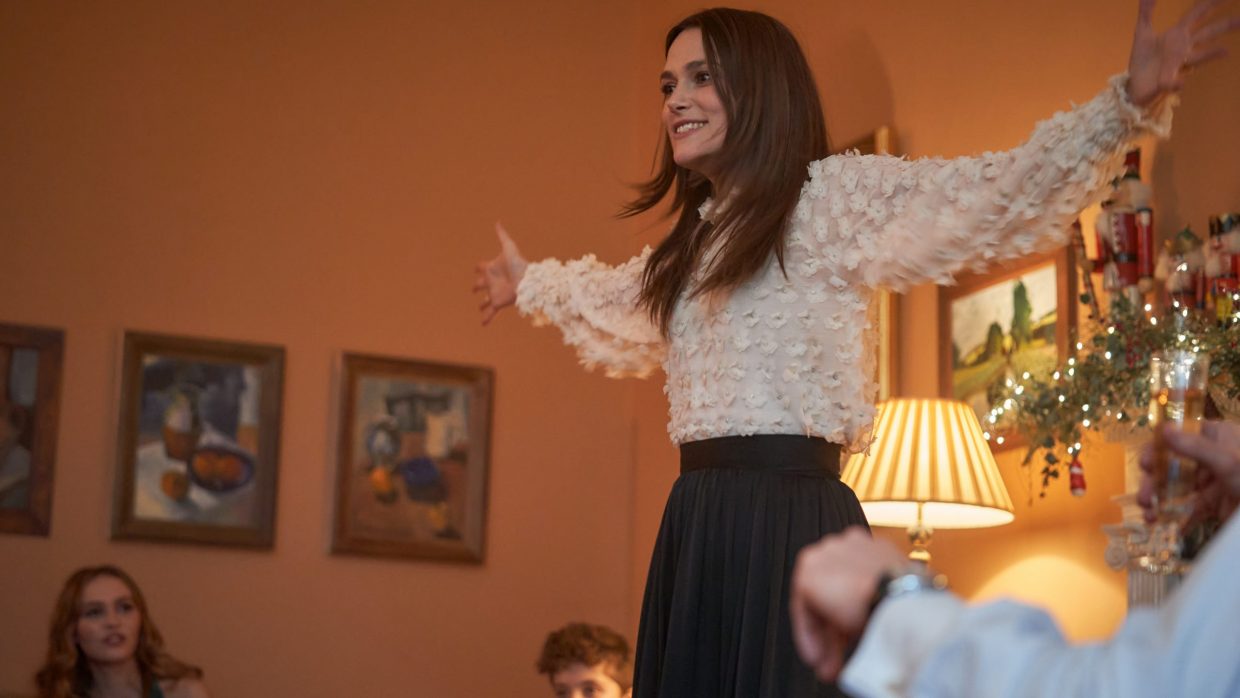 Just in time for the holidays, during which the question of what makes a Christmas movie appears across film social media feeds, arrives Camille Griffin’s Silent Night. From its title down to its Christmas setting, in which family and friends congregate for the kind of boozy reunion that segues from holiday cheer to emotional warfare, Griffin’s directorial debut sits squarely within the sub-genre and, due to one cross-genre addition, feels particularly of the moment. In Griffin’s film, the Yuletide gathering is to be a final one as a poisonous gas cloud is poised to envelope the earth, killing all living creatures. Faced with the scientific knowledge that a painful death will be inflicted on all its citizens, the British government becomes the ultimate nanny state, distributing suicide pills that should be taken at the stroke of midnight. For this group — who include hosts Nell (Keira Knightley) and Simon (Matthew Goode), as well as Nell’s oldest son Art (JoJo Rabbit‘s Roman Griffin Davis, also the director’s son) — the concept that this night represents their final hours is initially something to be denied, a disaster that’s less pressing than dessert recipes and romantic score-settling. Of course, as the film progresses, stiff upper lips sag and the horror becomes real.

Juggling a number of tones, from farce to class-satire to horror, Griffin has made an ambitious picture that hits even deeper due to its release during the COVID-19 pandemic. Like Adam McKay’s Don’t Look Up, the film was originally designed to speak to the issues of climate change, but the political and social dimensions of the current health crisis provide new meanings. Below Griffin and I talk about how she hasn’t made an anti-vax film, the struggles to greenlight a first film in the UK, the support of filmmaker Matthew Vaughn, and the post-production tricks directors use when delivering news of the end of the world.

Silent Night is in theaters from RLJE Films and streaming exclusively on AMC+.

Filmmaker: Let me start by asking you about your path to this feature, your first. Your IMDb credits in the camera department go back 25 years, and you’ve been making your own short films since 2003. Was a feature always something you were striving for, and could you tell us about the different steps along the journey to Silent Night?

Griffin: I started my journey in the film industry working in the camera department. I spent 13 years loading film until the industry became mostly digital. I knew early on that I was fascinated by story and performance, so I began writing scripts, making short films, whilst earning money as a clapper loader. It’s taken me this long because I couldn’t get funded in the UK And when a project was rejected, I’d cry for bit, then get out and study more. I found development workshops, film labs, film schools, all whilst being on set and experiencing other filmmakers doing their thing. Then I had kids, more writing, more applications, more workshops, more tears, until a friend said, “Stop asking for permission, stop looking to the U.K. funders to approve you as a filmmaker.” So I did. She was right. I stopped. Which led me to approaching Matthew Vaughn.

Filmmaker: I think Americans looking at British and European funding systems see ways of making first features that are somewhat orderly — a series of shorts leading into films that have some kind of institutional funding. As I’ve read in other interviews, your funding came through private equity, which is more often the case with American independent films. Why do you think it was hard for you to launch a feature through some of the more conventional UK routes, and what was instrumental in attracting Matthew and the financing that you did wind up getting for “Silent Night.”

Griffin: I was constantly told by the UK film industry that my material was tonally and psychologically ambitious and that they didn’t know if I could deliver as a first-time filmmaker. I found this hard to understand as I was writing the material and I had no doubt that I could deliver. I also think my work challenged the status of the middle classes and our industry is mostly governed by middle-class gatekeepers.

I admit after 20 odd years I found this despairing. I jumped through every imaginable hoop until I was ready to give up. I only went to Matthew Vaughn for advice to find funding. I never considered he’d produce Silent Night. But Matthew admired the courage of the script, believed strongly in the environmental message in the film and also wanted to back a first-time female filmmaker. It wasn’t necessarily always a piece of cake with Matthew, he’s a hard taskmaster, rigorously thorough and a filmmaker in his own right. But Matthew championed me, he taught me a lot, he supported me when no one else would. As for the cash, you’d have to ask him.

Filmmaker: I’m curious about the origins of the story. Did you start with the holiday or the impending disaster? Or perhaps the specific tone of the film? What came first, and how then did you build the other elements surrounding it?

Griffin: The film came out of me, perhaps with the freedom that it wasn’t meant for anyone other than myself. And my intention was to make a low-budget film by myself. No begging to the gatekeepers, just me and some friends, maybe my family, whatever I could muster, so I just sat down and started writing. My initial inspiration was Taika [Waititi]. I experienced him working with comedy and drama on JoJo Rabbit and something shifted in me. I suddenly saw the light as such. I didn’t know if I could be funny, but I thought I’d give it a go. And I’ve always written about dysfunction within the middle classes. My material had always been both melancholic and absurd. The tone wasn’t hard for me.

Filmmaker: What were the storytelling challenges inherent in your concept with regards to the dispensing of information about the calamity that’s about to befall mankind? How did you decide when in the screenplay you’d deliver this information and how, and did these decisions change in terms of post-production?

Griffin: You’re absolutely right. I’d worked hard on the world rules but most was thrown out in the edit. My gas cloud was different, and even the cloud story itself changed from the shoot to the edit. The news wrapping was always in the script — that was shot on camera. We had multiple versions of the phone footage, speeches, VO’s, radio inserts, we went back and forth and so on.

Art (Roman Griffin Davis) being on his phone was always in the script. We only went back for a few close ups of [where] Roman then gave us various reactions to a blank screen.

We all knew his phone would be the main source of delivering information. In my shooting draft he was listening to news reports, watching videos of the poison effects etc… and yes this device (simply a blank phone screen) enabled us to play with the information later. This was one area Matthew was particularly rigorous about. I wanted more ambiguity, Matthew wanted absolute clarity. The placing of Art’s phone scenes structurally didn’t change, I wrote them to build with the act changes and the dramatic tonal shifts as Art’s world became more conflicted.

Filmmaker: When it comes to apocalypse films, what are your favourites? And what films — apocalypse or not — were influential to you when making Silent Night?

Griffin: I think its obvious to say I wasn’t trying to make Melancholia but it was clearly an easy pitch reference: “Love Actually meets Melancholia.” But really Haneke, Polanski, the French, the Danish, those European masters always inspired me.

Filmmaker: Without going into spoilers, your film has a last shot that’s a bit of a twist ending, or at least, one that reframes — possibly — what’s come before. It also provides an ending that one can extrapolate from in very different ways, from hopeful to even more terrifying. Was this always the last shot? What were your intentions with it?

Griffin: I always wanted Art to be rewarded for his courage — if not I worried the film might be too much to bear. I also wrote and shot a different story end for Sophie to support Art’s. But that was changed by the producers later in the journey.

Silent Night was always supposed to challenge the values of the privileged classes. I wanted to focus on those that have the status and ability to make changes yet don’t. The fictional EXIT pill (inspired by Brexit) is issued by the government to avoid suffering. Suffering is what happens to people when governments avoid taking responsibility.

Filmmaker: Finally, there have been many films whose storylines take on new resonances and meanings in the wake of COVID-19. Yours does as well. As you acknowledge in the press notes, the film questions how much we can trust the government when it comes to health policy, and a major plot point concerns not a life-saving vaccine but a deadly suicide pill. At what stage in the process did you become aware of the possible new ways the film would be read in light of COVID-19 and anti-vaxxers? What sort of conversations did you have around this plot point, and did anything change in your screenplay from its original version?

Griffin: I haven’t made an anti-vax film, let me put that straight out there. Of course the film isn’t questioning the authenticity of science that undebatable. But yes I have made a film that challenges trust in government.

We didn’t know the film might be misinterpreted. We never tested the film. We never had an audience reaction to refer to in post. The vaccine wasn’t out in the world. My only reference to COVID during the edit was Trump and Boris making a total hash of everything.