Indie Camera of the Year: Blackmagic Delivers Small in a Big Way 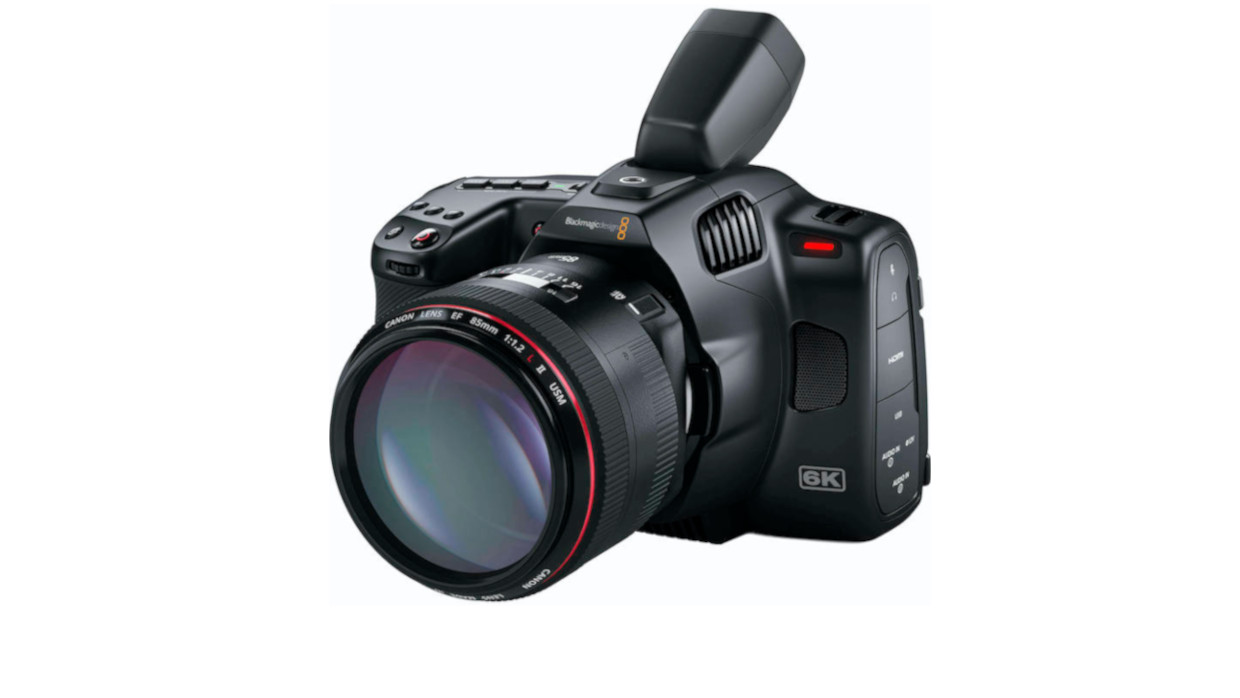 by David Leitner
in Cinematography, Filmmaking
on Dec 31, 2021

Since forever, I’ve gotten the question, “What camera should I buy?”

This always comes from someone not in the market for an Alexa Mini or 8K RED, but instead something recent, capable, and cheap. Did I mention cheap?

There’s no slam-dunk answer to this question, obviously, and never will be. No single camera is right for everybody or every situation. But among the wonderments of our 4K moment is the fact that virtually all 4K cameras make good pictures, taking into account their intended markets and price points.

To wit, you only have to reach for that iPhone Pro in your pocket, the one with a turret of wide, ultrawide, and 3x zoom lenses that captures HDR (high dynamic range), or a Samsung Galaxy S21 Ultra with its four lenses and 8K capture, or a Sony Xperia PRO-I with its outsize 1″ sensor—how did they fit it inside?!!

It’s hard to imagine we won’t be seeing fresh trends in documentary-making based on these pocket cameras, which are running away with the goal posts again, as they did with still photography.

But to those asking in 2021 “what camera should I buy?”, the affordable pocket camera I recommended more than any other is of a different category: Blackmagic Design’s Pocket Cinema Camera 6K Pro.

I spent much of the past year investigating the latest wave of “mirrorless” cameras. These are mini motion picture cameras derived from DSLRs. As was the case with their still-photo antecedents, controls and ergonomics are tailored to individual use, not crew use. As seen in the following photo, DSLR design cues manifest in Blackmagic’s PCC 6K Pro are clear. 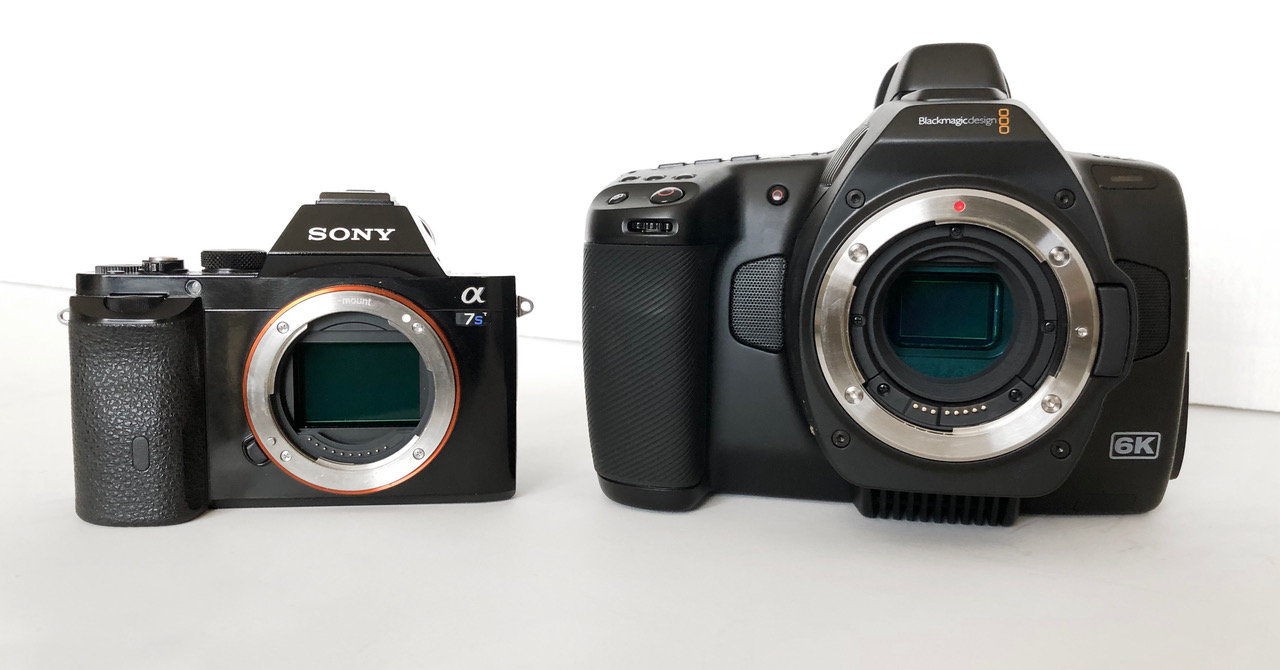 An indication of scale: my mirrorless Sony A7S from 2014 next to a Pocket Cinema Camera 6K Pro.

Practical field use of these mirrorless cameras for video production typically requires mounting them inside a skeletal “cage” with plenty of mounting holes. Attached peripherals often include an LCD bigger than the camera, an outboard recorder for ProRes or RAW files, audio items like an XLR input adapter, mic, shock mount, wireless receivers, and sometimes a small digital audio recorder. Such “Frankencameras” are a common sight these days in low-budget production.

What Blackmagic Design has delivered in the PCC 6K Pro is a compact Super35 camera that already incorporates much of what you’d otherwise need to add to a mirrorless rig. First and foremost is a tilting 5” HDR screen with a blinding 1,500 nits peak brightness, easily visible in bright daylight. This makes unnecessary, say, an Atomos Ninja V for monitoring, along with the extra weight of its battery. 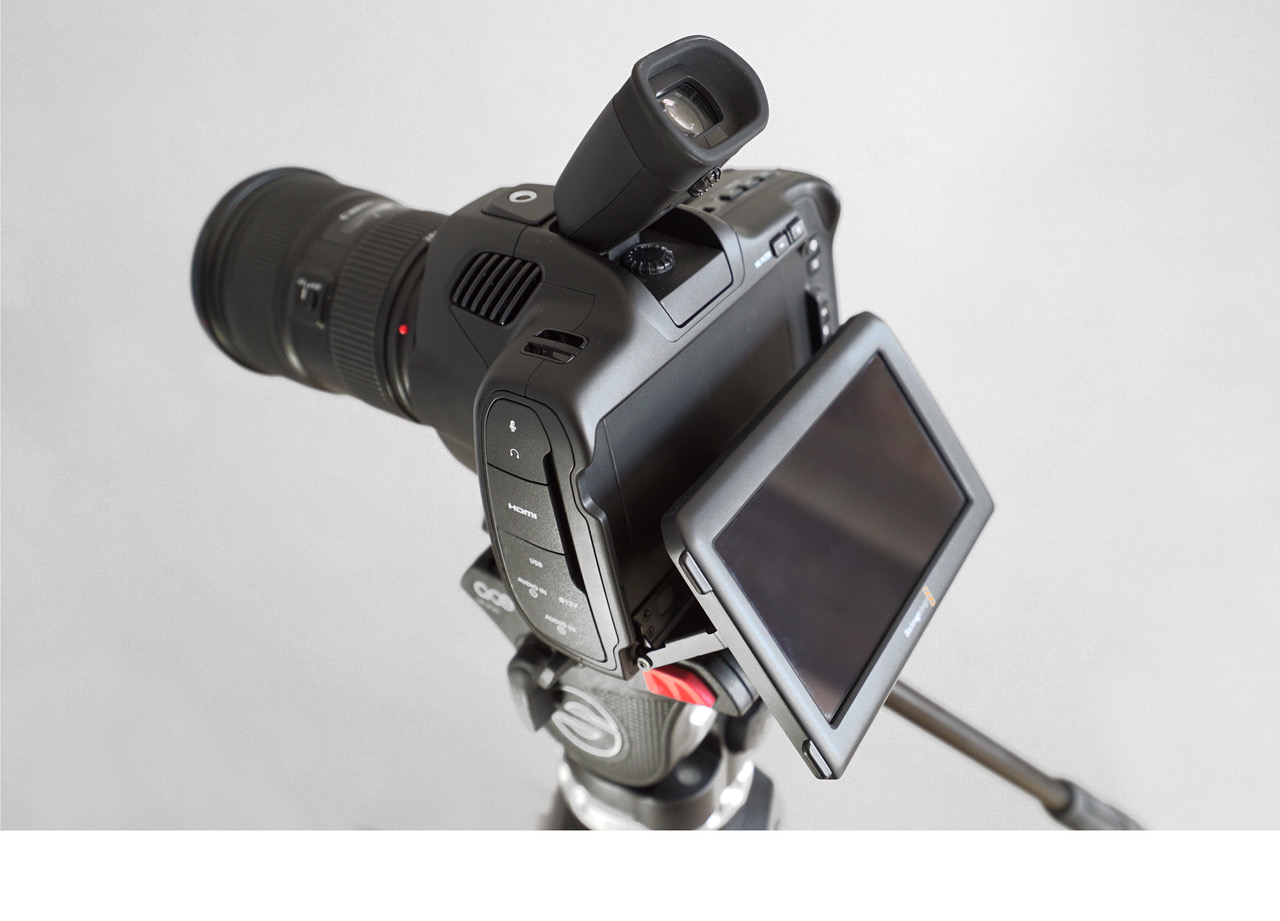 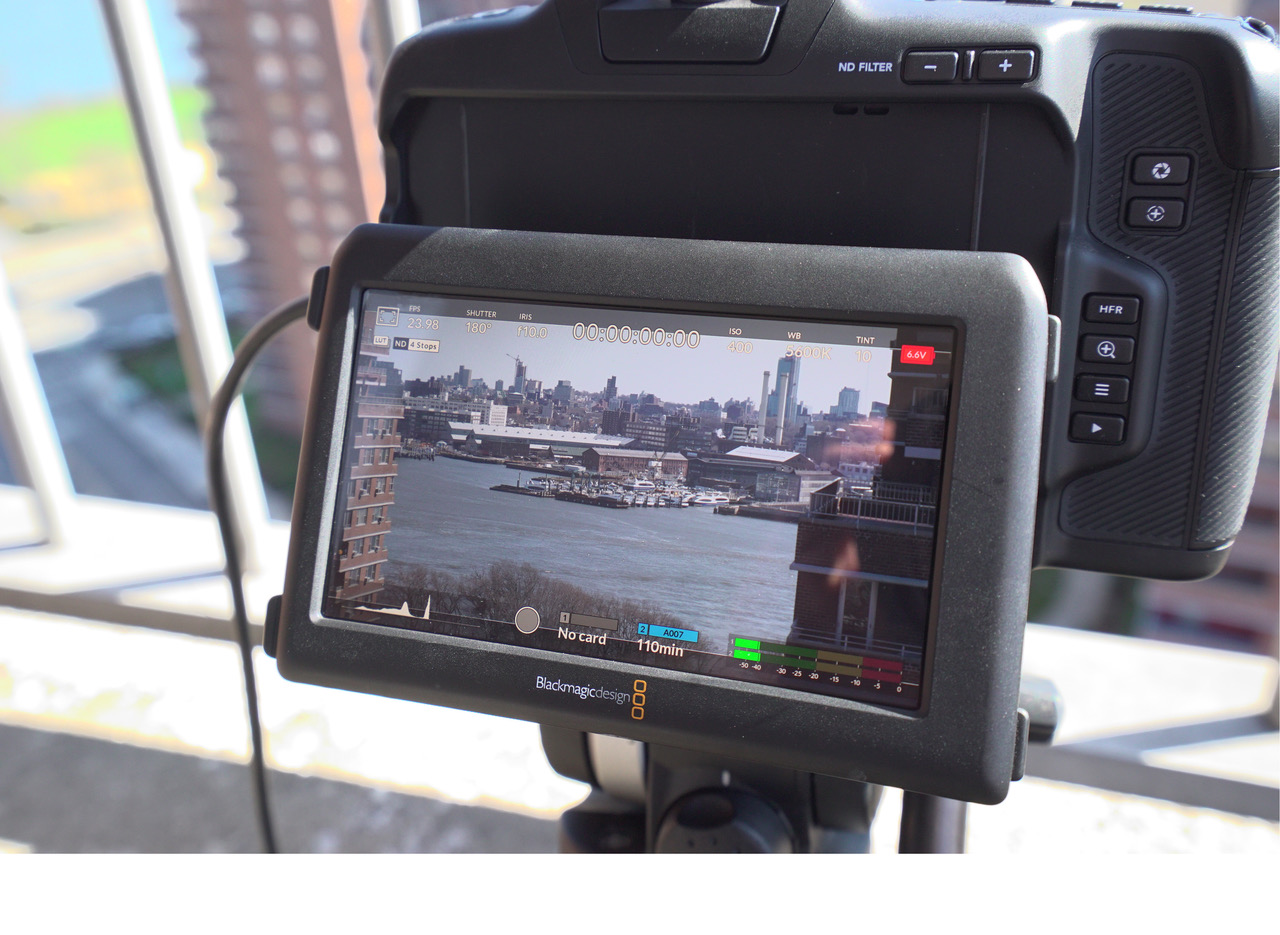 5-inch High Dynamic Range (HDR) LCD is not washed out when viewed in bright daylight.

No audio input module is required. Two channels of audio are always being recorded, either from the PCC 6K Pro’s built-in mics, through dual mini-XLR inputs with phantom power, or through a 3.5mm stereo mini phono jack. Through this mini phono jack the PCC 6K Pro can also record external timecode. Its own internal high-resolution timecode clock is accurate to within a frame over six hours and can be jam-synced to other devices.

The PCC 6K Pro is EF-mount only. Here I might cite Orson Welles: “The enemy of art is the absence of limitations.” However an EF-mount is hardly limiting: besides Canon’s classic L-series, you can attach Zeiss CP.2 lenses or Sigma Art lenses. The list of EF-adapted lenses is lengthy. The camera’s 6K sensor is superb can capture the quality of any lens put in front of it. Some in the Hollywood community have described its look as “organic” and “filmic.” As with the very latest sensors, it provides a dual native ISO: 400 and 3200. In front of the sensor, the PCC 6K Pro incorporates an internal 2/4/6-stop ND filter wheel that suppresses unwanted IR (infrared) transmission, which can discolor dark objects. 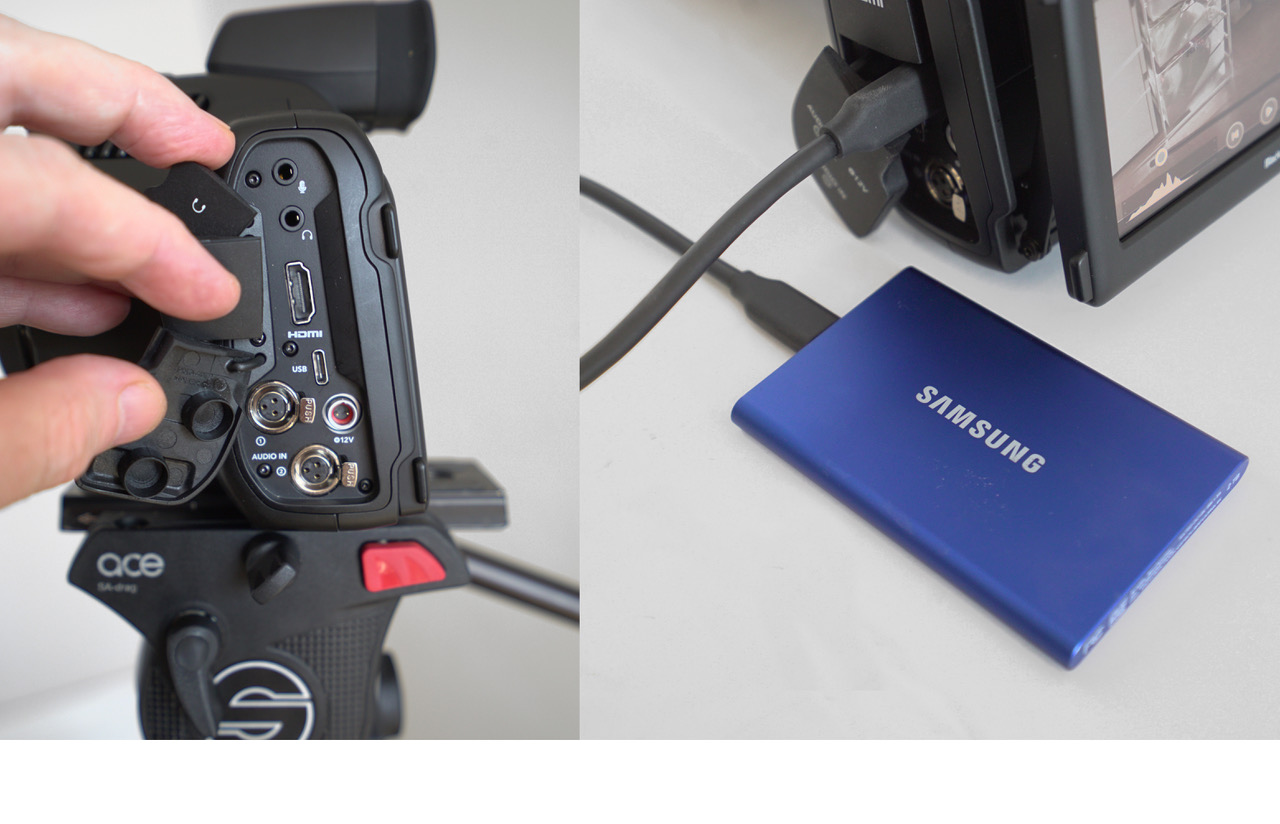 Video outputs include USB-C and HDMI. At right, an SSD using USB-C to record.

Internally the PCC 6K Pro records Blackmagic RAW and ProRes to high-speed SD cards or CFast 2.0 cards. Externally it records to affordable off-the-shelf SSDs by using a USB-C cable, which also powers the SSD. As an alternative, you can also use the full-size HDMI port to record externally or stream live. Each of these media types can be formatted in-camera, or you can format then on your computer as either HFS+ (Mac) or exFAT (Windows). The camera doesn’t care which. For both RAW and ProRes, maximum frame rates for 6K, 5K, and 4K are 50 or 60 fps, depending on aspect ratio. 2K and HD offer 120 fps.

I can’t say enough good things about the care Blackmagic has invested in designing a user interface (UI) that is simple and easy to operate. If you’ve tangled with endless menu trees full of poorly-explained functions in other cameras, you’ll appreciate the simplicity of a large touch-screen with well-organized, generous-sized selections that are clear and well laid-out — in any one of the eleven languages you can choose from.

If you want an uncluttered viewing screen with no data overlays, just swipe up or down. If you want to magnify the image to check focus, double-tap the screen and zoom in with the front scroll wheel. If you’re using an autofocus lens, you can touch the screen to select an object to focus on. The touchscreen can also control the iris of an autofocus lens. For that matter, so can an app called Bluetooth+ on an iPhone. And not just the iris… I experimented using this app to accurately pull remote focus on Canon L-series lenses, and I got pretty good at it while eyeing the red peaking on the PCC 6K Pro’s screen. 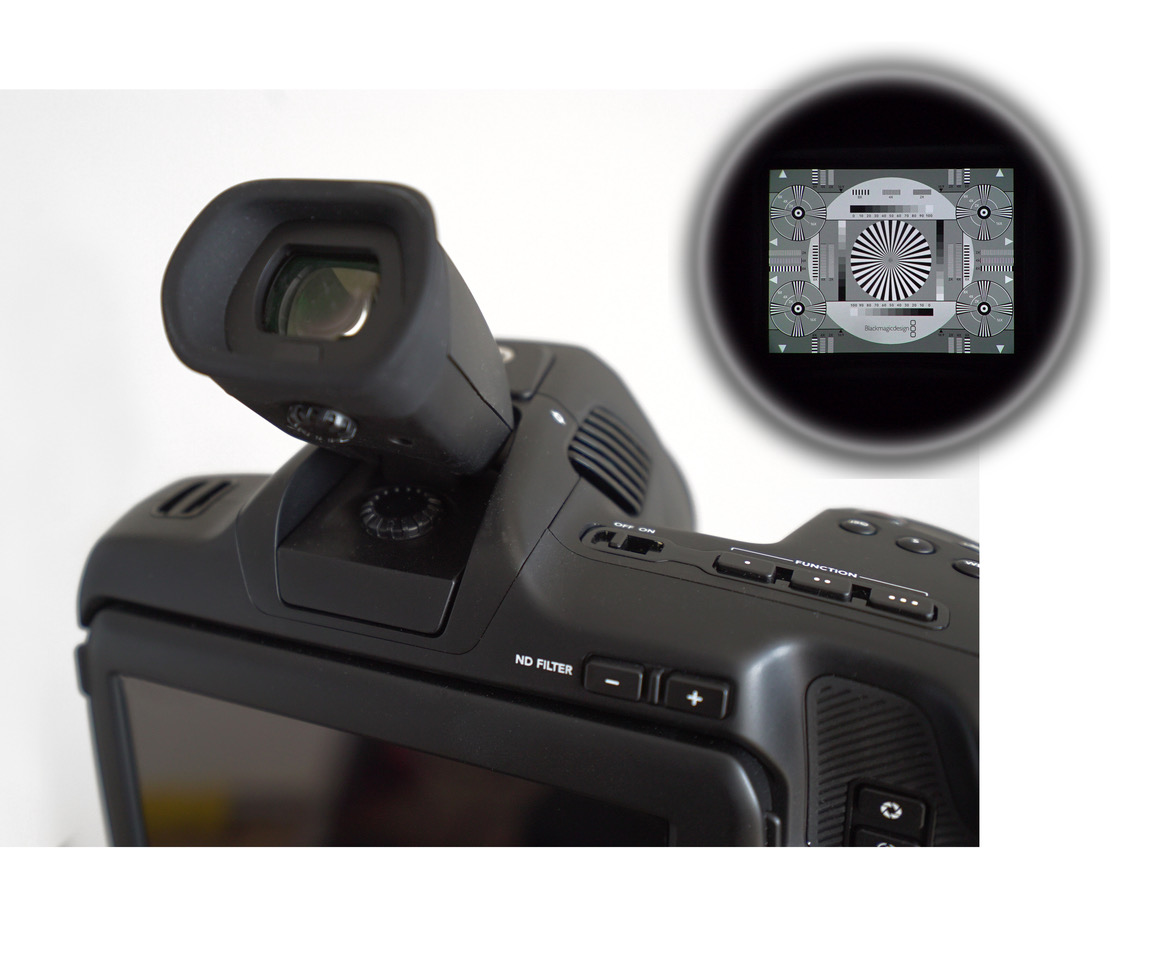 A Siemens star focusing aid can be displayed inside the optional viewfinder for quick adjustment of diopter for your eye.

If you are a viewfinder person like I am, the PCC 6K Pro has you covered. Blackmagic designed an excellent modular viewfinder for the PCC 6K Pro that attaches to the top of the camera. It provides a feature I’ve never seen before, a Siemens star for adjusting with confidence the viewfinder’s diopter for your eye. Otherwise it displays the same image and data found on the LCD. It costs an additional $495, but I consider it an essential.

As mentioned above, no camera is perfect, and the PCC 6K Pro has shortcomings. Location and feel of physical buttons are disadvantageous for handheld work when the viewfinder is in use. Absent are popular functions like continuous autofocus, auto white-balance tracing, auto ISO, in-body stabilization, and more. (Canon lenses with optical image stabilization will offset lack of in-body stabilization.) And to be clear, you’d actually need a pretty big pocket for this camera. The PCC 6K Pro is noticeably chunkier than most mirrorless cameras, in part to accommodate that five-inch LCD. Indeed, the PCC 6K Pro reminds me of a 1960’s VW bug or Citroën 2CV: homely yet beautiful in its simplicity and reliability.

Unlike those air-cooled vehicles, however, the PCC 6K Pro must use a cooling fan to expel the considerable heat generated by pushing around so much internal data. This can be softly audible while the camera is powered, and it can be turned off entirely during filming if desired. But heat always implicates battery drain, and the PCC 6K is indeed battery-hungry. Happily there are various ways to power the camera, including USB-C and a dedicated power adapter with a locked connector. 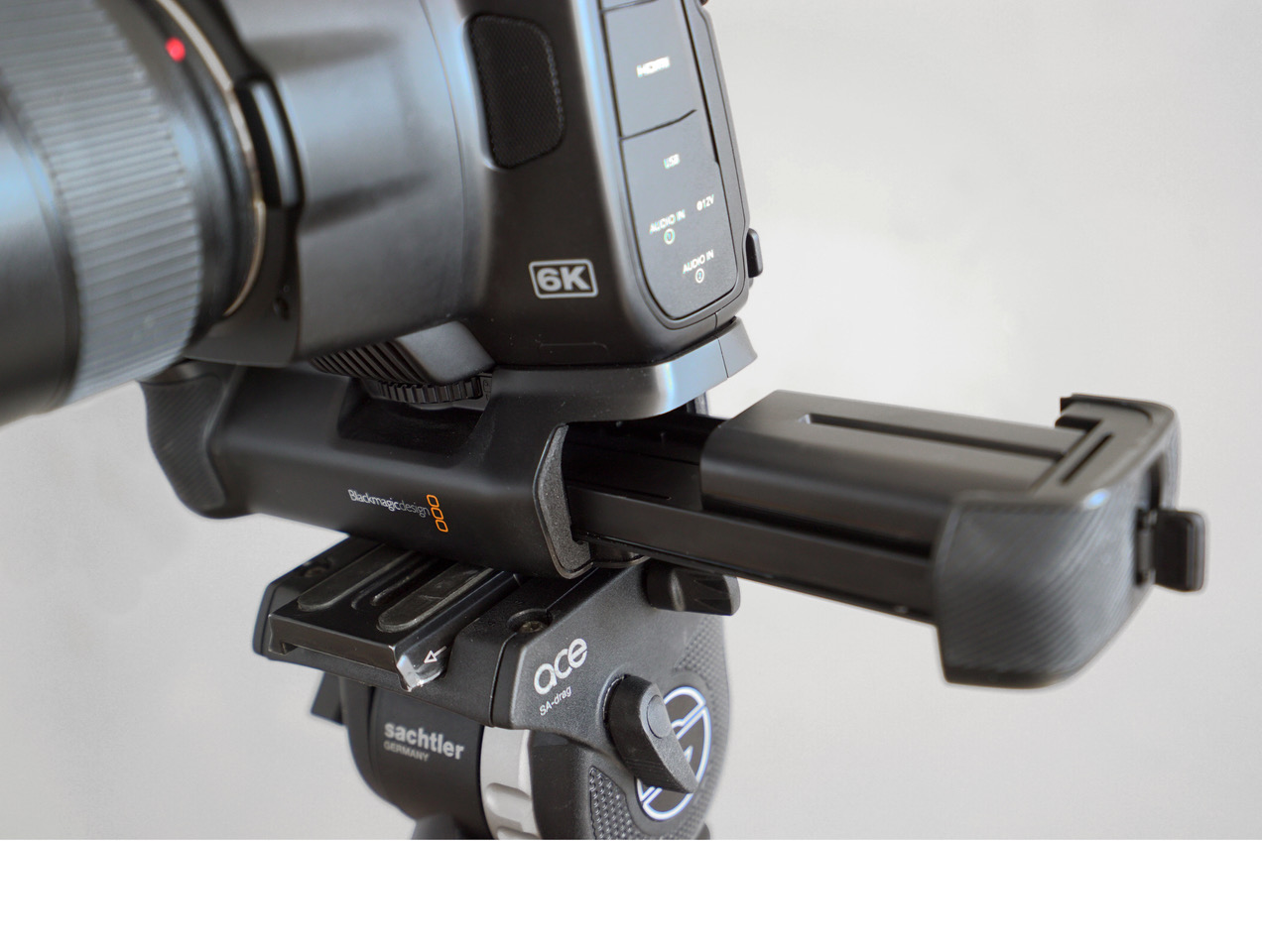 Lastly, purchase of a PCC 6K Pro includes a full license to the Studio version of DaVinci Resolve ($295). Especially for an indie filmmaker just starting out, using the PCC 6K Pro in tandem with Resolve opens a gateway not just to a fun production playground but also an advanced curriculum in post. Resolve’s well-written manual can introduce you to the wonders of professional grading, effects (Fusion), audio post (Fairlight), and modern wide-gamut color management. With the friendly help, of course, of countless YouTube how-to videos.

That’s a heck of a lot of value for $2,495 — and why, in 2021, I could readily recommend the PCC 6K Pro to any indie filmmaker, regardless of experience level. My choice for indie camera of the year.