“I Thought About How Crucial It Is to Try to Extract Meaning From the Visible and Invisible Historical Layers of a City” | Sierra Pettengill, RIOTSVILLE, USA 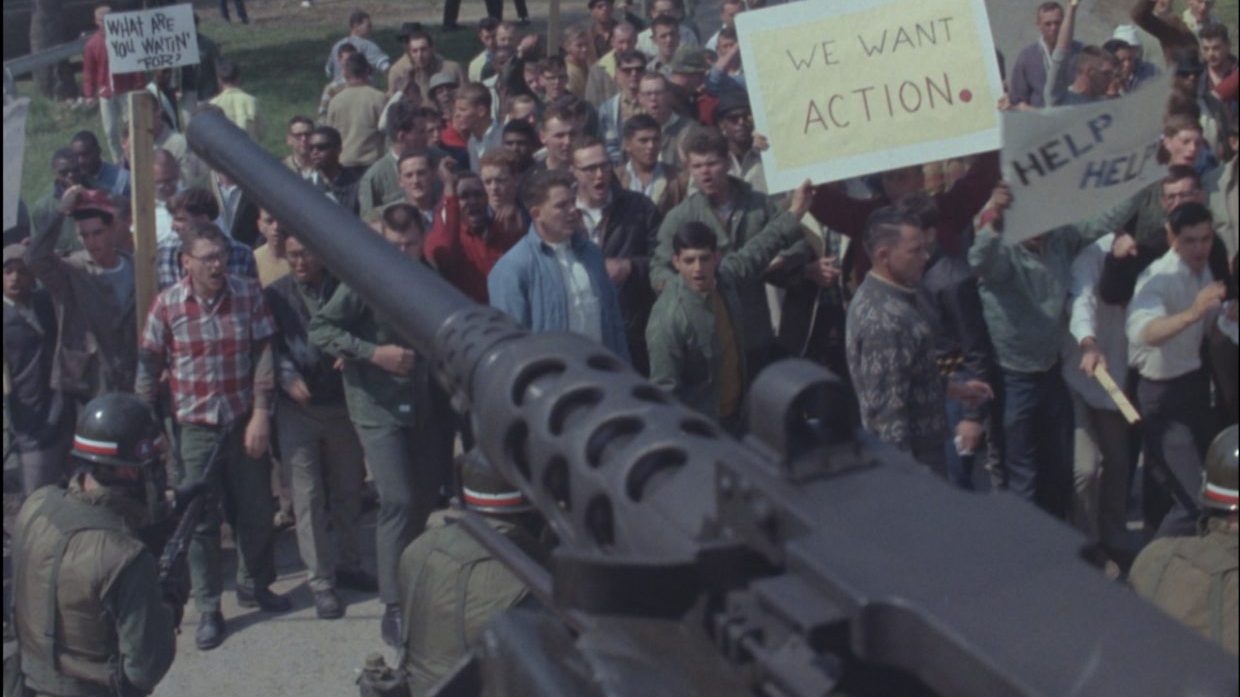 Across a year molded by the pandemic, RIOTSVILLE, USA.‘s writer Tobi Haslett, editor Nels Bangerter, and I did the entirety of our collaborative work remotely. While wildfires turned the skies outside Nels’ home in Northern California a rusty orange, the persistent sirens of overburdened ambulances wailed outside our apartments in New York. The video chat software’s algorithms automatically flattened out the disruptive noises and corrected for the shifts in light exposure; as we spent days together inside our screens, most hints of geographical specificity vanished.

This autumn, many months after we completed the edit, I traveled to Greece for the final stages of the film, and worked with a sound mixer and colorist with offices in the Monastiraki neighborhood of Athens. Every morning I passed through 1970s concrete blocks emptied and then reoccupied during the 2008 financial crash, beside the ruins of Hadrian’s Library, which transformed hundreds of times since AD 134—to army barracks, prisons, a mosque—and by rows of tourist shops staffed by immigrant workers. I thought about how crucial it is to see and feel the physical spaces of our world, to try to extract meaning from the visible and invisible historical layers of a city.

Serendipitously, as the film wound to its close, I was able to spend an afternoon in Athens with Tobi in person. Over tea, he shared an essay by Alexander Clapp that had been accompanying his walks through Athens and which charts the shaping of the neighborhoods of the city by Cold War powers determined to rebrand the city as the birthplace of democracy (and to stamp out Communist resistance).

A few days after we met, 34,000 people marched on the anniversary of the 1973 Athens Polytechnic uprising against Greece’s military dictatorship. That evening, walking home from my final color correct session, I was swept up along with the protests. On a corner I saw a squat white police tank that uncannily resembled the 1968 “Witchcraft” tank featured in RIOTSVILLE, USA. Heavily-armed cops gathered on every corner for miles, their belts weighed down by massive tanks of tear gas. Athens, Clapp says, monitors the Greek population “outfitted with military-grade equipment—armored buses, tear gas outlawed under the Geneva Convention but purchased from the United States and Israel.”

I thought about a line from Djuna Barnes’ novel Nightwood: “What is a ruin but time easing itself of endurance?”