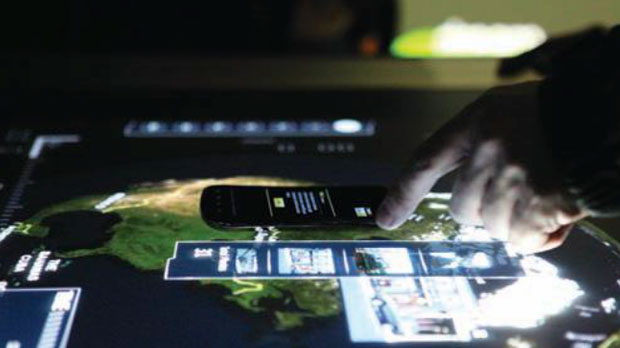 by Lance Weiler
in Columns, Filmmaking, Issues, Transmedia
on Apr 17, 2011

The search for the next big thing — An idea, product or service that profitably nails the zeitgeist — drives many businesses. Entrepreneurs, developers and programmers all seek to develop a product that fundamentally changes the ways people interact, in the process becoming that one thing a person can no longer live without.

Over the past few years the quest for what’s “next” has been focused on the social graph. Companies have flooded the market with services and tools aimed at helping people connect. With more than 600 million users, a sprawling ecosystem and a current valuation edging past $80 billion, Facebook has clearly won this battle for “social.” But there is a new area of opportunity in play: the next generation of social networking and mobile applications will be driven by storytelling.

Within the space between social networks and our increasingly ubiquitous mobile devices lies a nehttps://filmmakermagazine.com/news/?p=22208w opportunity for filmmakers. (And when I say “filmmaker,” I really mean “storyteller.”) In the coming years, the art of storytelling has the potential to reinvent itself, emerging with even more value than it has today. Ironically, this value won’t be tied to sales of physical objects (DVDs, etc.) but rather to the ways storytelling, aided by technology, connects us. These social connections will become a place where the story assists in the discovery of not just content but also products, services and locations. As storytelling breaks the so-called fourth wall, traveling beyond the confines of a single medium or screen and into the real world, new funding opportunities for storytellers will emerge too. A new “story layer” will rest in and around our daily lives, and with it will come a number of exciting storytelling opportunities.

Broadcastr.com, recently launched by the founders of the digital publishing company Electric Literature, is an interesting new launch in the location-based services space. Broadcastr has a growing archive of more than 5,000 stories, each of which is tied to a specific geographic location, enabling users to tie audio tales to physical locations. After downloading the app, a stroll through New York City becomes a walking bit of oral history or imagination as Broadcastr streams tales triggered by the location as well as a desired theme and the user’s interests. Broadcastr launched with stories provided by nonprofit partners such as Human Rights Watch and the National September 11 Memorial and Museum, and now it is working with local business by offering hyperlocal ads that will be relevant to its listeners. In the coming months Broadcastr will be opening up its API to encourage others to extend its service and access its database of stories.

The Google-backed Scvngr has developed a mobile gaming platform that powers location-based mobile games. “Playing is simple: Go Places. Do challenges. Earn points and unlock rewards,” Scvngr advertises, betting hard on the growth of the “game layer” over the next five years. Last month at the South By Southwest Film Festival, CEO and founder Seth Priebatsch spoke about the promise of the game layer — the placing of game mechanics within everyday life — in a keynote address. He said, “The game layer is the next decade of human interaction. We can use game mechanics in the real world to motivate people… In the next decade we will build out the game layer, where people will traffic in influence. The game layer seeks to act on individual motivation — how we do it and why we do it.” While many are working to use the game layer — or, as some call it, “gameification” — to aid social change and education, others see it as a way to influence consumer behavior and drive players toward a purchase. As Priebatsch stressed in his talk, the game layer is being created for us as we speak, and if we are to direct its potential to worthwhile goals, we must seek to influence the design of its architecture and standards.

Another exciting emerging technology coming to mobile devices and offering the opportunity to change the relationship between audience and story is NFC (Near Field Communication), a variant of RFID. But unlike QR codes or barcodes, NFC doesn’t require the user to open an app or enable a mobile device’s camera. Similar to a turnpike driver’s EZ Pass, NFC is able to self-launch based on a device’s proximity to an item embedded with a special tag.

I used NFC technology when my team and I staged Pandemic 1.0 — a short film, installation and transmedia event — at the Sundance Film Festival this past January. Six hundred NFC
tags were placed on a variety of objects hidden throughout Park City. When NFC-enabled phones came in contact with tagged items, additional story elements were activated. NFC tags can be assigned to web pages, photographs, video and audio; they can even initiate an SMS message or a phone call. We did all of this in Pandemic 1.0, making NFC tags extensions of our storytelling — the keys with which players could unlock a variety of story assets and dive deeper into our story world.

More than a trend, NFC is expected to be at the center of a $1.4 trillion mobile transaction industry in the next five years. Google, Apple and all the major telcos are supporting NFC, and a number of low-cost options are being developed that will bring the technology to the current generation of mobile devices.


THE EMERGENCE OF UX WITHIN STORYTELLING
As audiences’ relationship with storytelling evolves and stories become more fluid across devices, understanding UX (User Experience) design will become an essential skill for artists. When I begin a project I’ll often allocate time to create “user narratives.” A common practice within product and interactive design, user narratives look at how a user moves through an experience in an attempt to understand how and why they make the choices they do. Filmmakers interested in expanding the stories they tell can find value in UX.
Understanding it can aid the flow of stories across devices and into the real world. Similar to crafting a scene where you want to hook the audience by creating an emotional connection to the story and its characters, UX is a way to craft coherent, resonant and grounded storytelling experiences for stories spanning multiple platforms and devices.

Companies developing new products or attempting to improve their existing services explore the concept of user narratives too. At a recent talk at Stanford University, Jack Dorsey, co-founder of Twitter, explained how product development at the company has been forever changed by the examination of user narratives. Dorsey discussed how storytelling is helping to drive product innovation there and how watching users actually engaging with products or services keeps design honest and simple.

Can UX design and user narratives be applied to storytelling? Whitney Quesenbery, UX designer and author of Storytelling for User Experience, thinks the answer depends on the relationship between creator and audience. “One of the differences between UX and art is that the work of UX is focused on the people who will use what you make, rather than [your own] personal expression,” she says. “That means that before anything else, you want to be able to tell the stories of those people. Once you understand their lives and circumstances and motivations, you can begin to imagine how your product will fit into their lives. Improve it? Change it? In what ways? What’s that new story like? How can you embed that story into your design? It might be explicit, but often, it’s implicit. You might think about what role the app or site plays in someone’s life, and that can give you a direction for setting the style and tone of the conversation.”

In the end, what makes the current opportunities for transmedia storytelling so exciting is that there are no rules. As a wise game designer once said, “Transmedia is in the early stages of its life, like the moment when silent films realized the camera didn’t have to stay pointed at actors on a stage.”

So, I say, let’s take the camera, the actors and the audience outside.