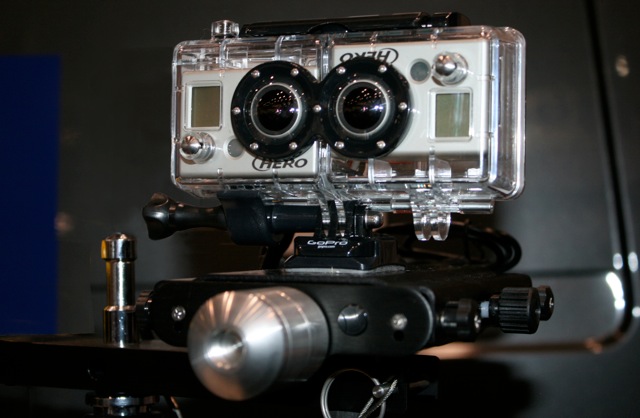 Not a robot with attitude but a GoPro HERO 3D system. Waterproof and 1080p. Not a robot with attitude but a GoPro HERO 3D system. Cheap, waterproof, and 1080p too.

NAB’s ubiquitous buzzwords this year were 3D and 4K. Or should that be, buzz-acronyms?

James Cameron and camera design partner Vince Pace kicked off NAB with a keynote in which they announced founding a new company, Cameron-Pace Group, to spur the industry, particularly television, into rapid adoption of 3D technologies.

Cameron, who knows a thing or two about being on top of the world, may have it right again. He and Pace think that TV is fertile soil for 3D, that in a space of five years TV viewers will expect 3D. By then, they contend, 3D technology will be conventional, the business model firmly in place, and directors will have discovered they can shoot 3D the same way they shoot 2D today, camera setups and all.

Foot-draggers who insist on watching 2D? Just throw away “one eye” during the telecast.

In a way, this push for 3D is reminiscent of the switch from mono to stereo music in the 1960s. Back then you had to get a new stereo turntable and amplifier to play stereo records.

But there’s a nagging fly in 3D’s ointment. 3D TVs were a vanishing act at this year’s NAB. That’s because in the past year, sales of 3D TVs to consumers have tanked. (A year ago at NAB, you tripped over 3D TVs.) So why the deluge of 3D camera rigs at this NAB?

For starters, 3D movies continue to do well at the box office, and anxious Hollywood is still celebrating.

The living room sees things differently however. Sales of 3D TVs sputtered because 1) cable content is still building—Discovery’s 3net joined trailblazer ESPN 3D only in February—and 2) because consumers will balk at $100 active-shutter glasses. People who neglect charging cell phones are going to want to charge 3D glasses too? As father of a daughter who regularly also loses her cell phone, let me confirm there’s no way I’m going to buy a shoebox of $100 3D glasses for a roomful of kids or neighbors to come over and watch TV.

The answer is cheap, circular-polarizer “passive” glasses, the type you toss away at most movie theaters. JVC makes a superb 3D TV that boasts this technology. I watched Spain vs. Germany on a JVC 3D flatscreen during last summer’s World Cup and it was a blast. Whichever angle I turned my head, the vivid colors and 3D effect remained. (What kid doesn’t stretch sideways on a sofa?) When, during the same game, I switched to a Sony 3D display with active shutter glasses, not only did the image grow dim, but as I tilted my head side-to-side, a blue-yellow shift appeared. 3D camera rigs proliferated this year at NAB because 3D production is expanding in every direction. I mentioned in my first NAB blog that Peter Jackson is filming in New Zealand with several dozen hand-built RED Epic-M cameras, but what I didn’t mention is that he’s shooting both installments of The Hobbit in 3D. (Also 48 frames/sec. Showscan lives!) Other 3D RED Epic productions underway are The Amazing Spiderman and Ridley Scott’s Prometheus, an Alien prequel of sorts. (Last year Scott started a 3D production company called Scott Three Productions, a play on Scott Free Productions.) Combine many thousands of 3D movie theaters with world sports events like the World Cup or Super Bowl, or cultural events like the Metropolitan Opera’s Met in HD series produced by satellite-distribution pioneer BY Experience (www.byexperience.net), and you have a new path to popcorn sales. (Met in HD and other superb theatrical satellite programming like Danny Boyle’s haunting Frankenstein at the National Theatre cry out for 3D treatment given the Royal Opera’s Carmen, released theatrically last month.)

But where 3D is truly poised to divide and conquer is the realm of gaming, smart phones, laptops and, soon, tablets. Acer introduced an inexpensive laptop with a polarized 3D screen in late 2009. At a Cinematographers Mailing List party at NAB, I watched clips from an 18th Century costume drama shot in Lima, Peru—about a cataclysmic 1740 earthquake, sadly enough—in 3D on an Acer Aspire 5738DG (passive glasses), and it looked simply stunning.

At the same party in the same seedy hotel bar, I watched the 3D version of OK Go’s White Knuckles, in which our lads appear in white outfits before a cheap bluescreen and, joined by a pack of mixed dogs (look for the goat), scoot about in white Ikea Skruvsta swivel chairs. If you’ve only seen the 2D version on YouTube, you’re in for a delightful jolt in 3D. With dimensionality, the video breathes. You yelp in surprise as rambunctious dogs leap past your shoulder.

What’s more, I watched this in full 3D without glasses.

How? On filmmaker’s Eric Kurland’s brand new Nintendo 3DS, a breakthrough autostereoscopic gaming device that went on sale March 27th. Kurland stood in line to be one of the first to get one—because his 3D version of White Knuckles has been included in every 3DS sold in North America, to demonstrate the 3DS’s ability to play 3D videos and movies.

Autostereoscopic, you’ve no doubt guessed, means 3D without glasses. The principle is akin to those novelty “lenticular” 3D postcards you’ve seen for years, which when rocked side-to-side create the illusion of motion. (Plaintive Jesus with and without a crown of thorns, etc.) They work best if held in front of a single person, at arms length.

What other items are held straight in front of you at arm’s length? Smart phones, gaming devices… and… ?

How about flip-out LCD screens on camcorders. Sony’s new consumer twin-lens 3D camcorder, the HDR-TD10, introduces a flip-out autostereoscopic LCD panel for viewing, and it’s addictive. A black-painted pro version, the HXR-NX3D1, will appear this summer, adding 24p, a lens shade, a removable handle with XLRs, audio controls, and a cardioid mic, and 96GB of internal flash memory for 7.5 hrs. of 3D recording. Eric Kurland, president of the LA 3-D Club and a busy 3D consultant for indie productions, filmed the 3D version of White Knuckles with a homebrew 3D rig cobbled together for under $20 and a pair of Canon Powershot TX1s—tiny stills/720p HD cameras with a devoted following. The compact contraption was slung under the 2D camera, a Sony EX3, in a box that the dogs could jump on. Both 2D and 3D cameras were matched for framing.

In his 3-DIY blog at www.retinalrivalry.com, Eric describes the 3D production of White Knuckles in detail, including magical take 72, the keeper. (OK Go’s intricately choreographed videos are always one take.) A revealing technical description of his rig and post process can be found at http://tinyurl.com/42seff4.

Incidentally, if you experiment with DIY 3D, a good place to post your results (red/cyan anaglyphic only) is Vimeo’s Stereoscopic 3D channel or better yet, YouTube, which for several years has supported various types of 3D uploads, including left eye/right eye, and has included versatile 3D viewing options in the lower right corner of its 3D viewing window. Explore these resources today and you won’t be surprised when 3D Internet takes off in response to forthcoming autostereoscopic smartphones and other small displays. At NAB, 3D rigs came in all sizes, from minimal side-by-side GoPros (photo at top) and Silicon Imaging SI-2K Minis to ever-more-compact over/under rigs featuring pairs of RED Epics, Sony F3s, Ikonoskop A-cam DII’s (above), and Alexa-M’s—a new modular version of ARRI’s Alexa with the head separated from the body by a cable. (At ARRI’s booth, word was that M stands for Marie Antoinette.)

Cameron-Pace Group, in fact, played a direct role in developing Alexa-M, which they announced at NAB as their 3D digital cinema camera of choice. It’s worth noting that an early Alexa 3D rig designed by Pace was used last summer for the London production of Martin Scorcese’s The Invention of Hugo Cabret. Indies wishing to shoot 3D with a camera of more conventional shape and size might do well to consider one of several twin-lens single-camera systems introduced at NAB, including the Sony HXR-NX3D1 with autostereoscopic viewing mentioned above (dual 1/4-in. CMOS sensors), JVC’s similar GY-HMZ1U handheld also with autostereoscopic viewing, Panasonic’s shoulder-mount, news camera-style AG-3DP1 reported in my first NAB blog (dual triplets of 1/3-in. CMOS sensors), Sony’s shoulder-mount PMW-TD300 (dual ½-in. CMOS sensors), and even the Zepar system showcased at Abel Cine Tech’s booth. Zepar occupies a category by itself. I sat through a presentation in Russian about this system at last summer’s SMPTE International Conference on Stereoscopic 3D in New York. It’s based on a mid-1960’s 3D system known in Europe as Hi-Fi Stereo 70 and in the Soviet Union as Stereo 70, in which side-by-side Super35 images were recorded onto a single strip of 65mm negative, then projected as left-eye/right-eye images from a single 70mm print. While the 65mm camera was sizable, the twin-lens modules for the camera were small, the size of a coffee mug. Hmmm… which digital cinema camera with a 65mm-sized sensor might lend itself to a Stereo 70 update? Zepar 75mm twin lens next to iPhone. Seven primes are available, from 20mm to 100mm, for 2K 3D acquisition.

There is only one: Vision Research’s Phantom 65 Gold 4K High-Speed digital camera, which Abel Cine Tech has diligently transformed from a missile telemetry instrument into a sophisticated cinema camera. At Abel’s booth, an impressive Phantom 65-Z3D test reel shot recently by none other than Douglas Trumbull drew persistent crowds. It’s only a matter of time before an indie feature filmmaker creates a significant work in 3D. It could be a documentary or a drama. Are Sundance or Toronto or Berlin prepared to program it, no less project it?

Next up: large-sensor cameras up to 4K and beyond, lenses, lighting, and NAB miscellany.