Reaction To The Canon C300 And Red-Scarlet-X: Part Two 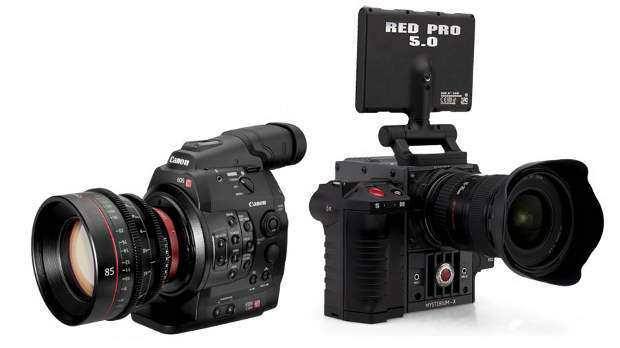 by Michael Murie
in Cinematography, Filmmaking
on Nov 14, 2011

In my previous blog post I interviewed several directors of photography who are shooting material for web and television to get their reactions to the recent Canon and RED announcements. You might sum up their reactions as, “We wanted to like the Canon, but it’s too expensive!”

To complete the picture, I talked to a couple of people who have worked on a number of indie films, and have worked extensively with cameras like the RED and Arri Alexa.

Finishing Artist and VFX Supervisor Dermot Shane is based in Vancouver and routinely works with material from REDs, and Arri’s (both film and Alexa). When I contacted him he told me that for the last few days these announcements have dominated his lunchtime discussions with co-workers.

He said that a fellow VFX supervisor who owns an Arri film camera and Nikon lenses is looking for a digital camera because he wants to avoid the hassle of renting. His reaction: “I’ll buy a Scarlet the second they have a Nikon mount on it. Canon is answering a question no one asked.”

A d.p. who is an EPIC and MX owner is more concerned that the Scarlet could kill off his camera rentals, and that people will only want to rent glass. He’s unconcerned by the Canon announcement.

A third d.p. says he would not buy either of them; he sold his Arri film camera years ago and doesn’t want to go back to the hassles of camera ownership. On the productions he works on he uses whatever camera the producer wants. He does use a Canon 7D, but only for pickup shots (his recent projects have been shot on 35mm, or RED and he mainly does features and MOW’s)

Dermot’s own reaction to the cameras is mixed. He owns an Arri film camera, a Sony NEX-FS100 and Nikon glass. He’s puzzled about Canon’s intentions with the C300, and especially with the 8-bit output: “Really who’s this for? The best bet is the event folks are the target. The documentary folks will still be holding onto their EX’s, and the indies will either be shooting 7D’s or NEX-FS100’s”

He goes on to say that the Scarlet is more interesting for VFX work, though he thinks the low light is weak in comparison to the Sony NEX-FS100 and PMW-F3.

“I’m likely to get a Scarlet once all the bits and pieces are actually for sale,” he continues, “and I’m sure I’m going to be finishing work shot with the Scarlet. I think my market for DI (indie features, MOW’s and national commercial packages) will not be seeing much of the Canon.”

Jeremy Traub is a d.p. based in Boston who is very familiar with RED cameras, though he’s also shot with the Arri Alexa and even DSLRs. He is also drawn to the Scarlet. “For cinematography, I think the Scarlet is the winner,” he says. “It has more resolution. You get the post-production benefits of working with REDRAW files, and it’s available now. For what they do, the Canon should cost half what the Scarlet does.”

While he thought the shadow detail in the samples that Canon posted look great, he’s not impressed by the C300’s lower resolution, 8-bit output and the compression being used. “A lot of people get turned off by going through the RED workflow, but for me it’s a dream because you can really push and pull it more in post.”

“For Hollywood, I don’t think the Canon works, but if you’re shooting television, where speed is more important, the Canon might be more attractive,” he continues. “It’s when you get into unusual situations, are doing VFX, or need super high-speed or 4K, where the Scarlet really wins.”

When I challenged him on the cost of the Scarlet once it’s fully kitted out, Jeremy said that even if it’s only two-thirds the price of the Canon, he’s not that concerned. “To me what’s much more important – even if it was the same cost – is the image quality.” And while he was impressed by the footage from the Canon, he noted that it’s difficult to really know how the camera performs when someone else shot the material. “How much is the camera, and how much is the lighting? I’d have to try it out myself. But which camera is right for you really depends on what you’re doing.”