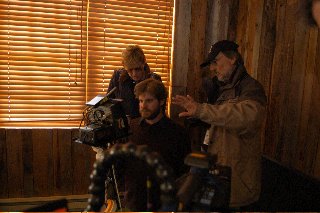 This is my first stab at blogging, okay? I’ve never been a self-starting chronicler, never had a personal essay phase, or a journal, or a sketchbook. I’m not wired that way. I don’t really know how to steal away time in bars or cafes, to reflect on my day in an endearingly scruffy little notebook—even a grocery list is a chore.

Long story short, I’m finishing up my second week here, and I have no notes. It’s blurs on top of blurs. Super-blurs, hyper-blurs, and where to go for some peace and quiet and that Alone Time with a hot cup of Sanka? Case in point, this is a Sunday, my “free day,” and here’s how it played out:

2:00-4:30, Screening of Little Fauss and Big Halsy (1970), starring a swaggering and shirtless Robert Redford, presented by Nicky Katt. Nicky, whom you’ve seen in probably more movies than you realize and who’s something of a mad cinephile, is acting in Daniel Casey’s Lab project Poletown. He keeps referencing movies that I’ve never heard of, severely fraying my adequacy levels.

4:30-5:30, Filmmaker Meeting, wherein we Directing Fellows air out our laundry, talk about the Process, laugh, cry, what have you.

6:15-7ish, Screening of the week’s scenes, wherein we Directing Fellows watch our edits in a room full of crew, staff, actors, and advisers. It’s a sweaty-palm kinda thing. (More about the PUBLIC aspect below.)

8:00-10:30, watch adviser Fernando Leon de Aranoa’s Mondays in the Sun, a simple and keenly observed study of laid-off friends in northern Spain. Starring Javier Bardem, who’s surprisingly hilarious for a paunchy, laid-off Spaniard. I’m describing his character, not him, so cool your jets.

Yeah, eight and a half hours of activities, and it’s my free day. Some were optional, but still—it’s an exhausting embarrassment of riches here. And so I lie, in blankets, way beyond the witching hour, and I’ve gotta be up at 6:45 in the morning, to walk halfway down a mountain, eat something/anything, and edit for nine hours, and I want to paint a picture for ya.

Dear Reader, how do I compress it? What would you like to know? I see no comments after my first post, so maybe it’s moot. (Do I offend?) I also see the picture with me and Gyula—pronounced JOO-la, and he’s not a Bond villain, he’s great, he’s Hungarian and an amazing director and wise and kind and supportive—and notice my noontime physique, my shape rounding off like a soldier six months out of Iraq. It’s buffet eating here, and me no good at restraining so much at the buffet. Apologies to my girlfriend.

Speaking of war and wars, the Lab is joked about as a boot camp for filmmakers. It’s not hyperbole, really. There is a rigid, almost relentless dedication to fitness here. Even something as seemingly straightforward as editing—when all is said and done, two people banging away in a small dark room—can feel like one of those Zero-G machines they fling you through in Air Force training. The thing in Spies Like Us. That thing.

I will focus, I must. Let’s talk about the public aspect, which takes some getting used to. I was talking with another Fellow, a commercial director named Frank Budgen, who’s brought a darkly comic adaptation called Shockheaded Peter to the Lab—of the Fellows, he’s worked on the most massive scales, piling up extras in Rio, animating clay bunnies in the middle of Manhattan, a city-wide water balloon fight in Buenos Aires, that kind of thing. Even considering the broad, high-budget, million-choices-a-minute experience, he was taken aback by how very open we have to be here. Everyone, from Lab head Michelle Satter down to the boom ops, seems to have read all the scripts, and there’s always some kind of audience, their eyeballs blinking in the cartoon dark. I’ll be digging down in a bag of Lays and four people will come up to tell me that they like Antoinette, who’s not a relative or friend, but a character I’ve written.

Support borders on the maniacal, in a good way. Shy ones are plucked out like errant hairs. There is a pungent, we’re-all-here-to-try-stuff-out-even-if-we-look-like-idiots vibe, and at first, cynic that I am, it all felt a bit…humiliating…

But the sunny smiles and the mountain air and the wise eyes of Gyula (there’s a title: The Wise Eyes of Gyula) have somehow beaten me into a glassy-eyed, productive spirit.

I’m not sure I’ve created anything good yet, and the Fear’s still there, but at least I’ve cast off those thoughts of stealing a jeep and peeling out, Zero-G, into the Utah wilderness.