Changes to Sony S-Log Pricing for the PMW-F3

by Michael Murie
in Cinematography, Filmmaking
on Mar 14, 2012

The last month has been a little confusing for the Sony PMW-F3.

When the camera was originally announced, the S-Log Gamma option was an add-on which came on an SxS card and cost $3,800. But a month ago, Sony announced a “temporary” change for the camera that was to run through March 31st. The S-Log upgrade would be available for $899 for those who hadn’t bought it, but Sony said that you’d have to send the camera in to get the upgrade installed. For those who had already purchased the upgrade at full price, they offered a $2,500 rebate if you purchased either an SR-R1 memory recorder, or the SCL-Z18X140 18-252mm zoom lens. Additionally, Sony was offering an $800 rebate on the camera.

A month later, and now they have changed things again. Sony has introduced two new models of the PMW-F3, the PMW-F3K/RGB and PMW-F3L/RGB, which replace the current models and come with S-Log already installed. They are also now offering the original S-Log upgrade on an SxS card for $899. The rebate for those that already paid full price continues. 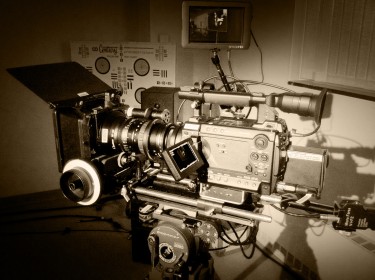 It’s more than possible that these hurried changes came in response to the release of the Canon C300. At $16,000 the C300 had actually been cheaper than the PMW-F3 with S-Log, and most people agree that for best results the PMW-F3 should be used with S-Log.

User tests suggest that the PMW-F3 and C300 are very close in picture quality; the C300 coming out slightly ahead if you compare images recorded to card, while the PMW-F3 gets the win if you use an external recorder. Of course, an external recorder adds cost and increases the size and bulk of your recording package.

Boston D.P. Benjamin Eckstein bought a PMW-F3 last November. He’d made his decision already knowing about the C300, though at that time he thought the price was going to be $20,000. He says, “I had some tax incentives for making this big purchase in 2011 and knew I had plenty of shoots lined up to use the new camera, so I sprang for the F3. I think the fact that I had only one Canon lens at the time also weighed into the decision.”

At the time he didn’t buy the S-Log upgrade, partly because of the cost, but also because a lot of the material he shoots he gives to clients to edit, and most of those clients aren’t currently looking for S-Log footage: “I know that if I delivered S-Log to some clients, they wouldn’t understand it, assume I shot really crappy looking footage and never call me again.”

Even for his own projects, he was hesitant to invest in S-Log because he prefers to have the camera record a final image he doesn’t have to manipulate afterwards. “I am not 100% confident that my colorist skills are capable of taking the super flat S-Log and making it look equal or better than what I can generate with a (close to) finished, in-cam look,” says Eckstein. “I will be able to test that out soon, and maybe I will be proven wrong – hopefully – but we’ll see.”

Now that the price is under $1,000, he still thinks it is overpriced for a firmware upgrade, but he has decided to buy it: “I figured for that price it’s worth having, both on the chance that a client asks for S-Log, or for a project I am editing that I see value in using it. I’ve shot ZERO with it, so I’ll be interested to see what it’s like. I already love the images that the F3 can make, so if it does enhance it, then that’s great. Will I use it all the time? I highly doubt it.”

Eckstein has mixed feelings on the machinations of Sony’s pricing for the S-Log upgrade. Noting that the packaging of S-Log has changed multiple times in the space of a month, and for earlier buyers Sony is offering rebates to products few people want, he says, “I certainly understand Sony’s feeling that they needed to compete with the newer C300, and it was smart of them to offer cheaper updates and eventually include it with the camera, but they pissed off many customers in the process.” He also adds that Sony has been “quite receptive to the fact that people are annoyed and [say they] are looking into ways to remedy this.”

Ultimately though, anyone buying a digital camera has to know that there will be something better/cheaper just around the corner. “That happens all the time,” says Eckstein, “and hopefully those that bought S-Log last year had a way to monetize that purchase or make it worthwhile at the time they had it. But those who spent 3K two months ago, yeah, I’d be pissed.”

One other interesting note; Sony America has been careful to say that the announced changes they have made apply only in the U.S. No word on what Sony is doing in Europe or Asia.

Finally, NAB is still a month away; could Sony have anything else up their sleeve, or was this something they planned for NAB and moved up? It seems unlikely they’ll be releasing another update to the PMW-F3 in a month’s time — unless Sony was feeling so much pressure from the C300 they felt they had to make an interim move before announcing a new camera that might not be shipping until May or June.