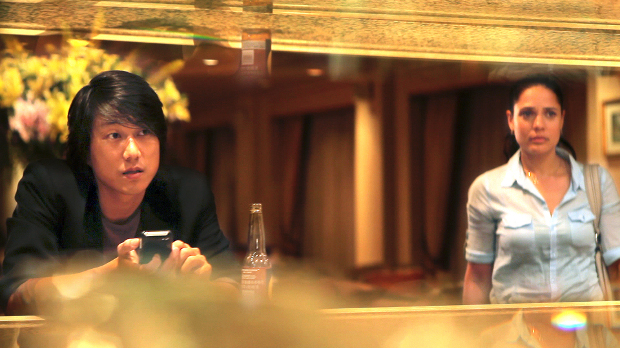 At SXSW a panel titled “The Great Cinematography Shootout” gathered a group of directors and cinematographers to discuss independent film lensing in an age of proliferating formats and lower-cost, high-quality cameras, like the Canon 5D. The directors of photography were Jody Lee Lipes (Girls, Tiny Furniture, and also the director of Opus Jazz), James Laxton (Medicine for Melancholy, Leave Me Like You Found Me), Clay Lifford (Gayby, and also the director of such films as Wuss and Earthling), PJ Raval (Trouble the Water, Sunset Stories, and also the director of Trinidad); and filmmaker, editor and d.p. David Lowery (Pioneer, and, as d.p. Audrey the Trainwreck). Here, from the d.p.’s, are ten tips for those looking to shoot smart-looking films on a low budget.

1. Let the camera create the atmosphere. The small form factor of the DSLR “changes everything, including the mood on the set and the performances,” said Laxton. As Romanski remarked about her Leave Me Like You Found Me at her Q&A, the 5D’s size and still-camera look, coupled with her film’s tiny crew, allowed an intimate and somewhat surreptitious shoot as they avoided park rangers in the Sequoia National Park.

2. Lenses are the new emulsion. Lifford remembered the days of celluloid, when low-budget filmmakers struggled to graduate from short ends and recans to shooting with more homogenous batches of stock. Now, DSLR shooting has brought with it a similar mentality. Said the Gayby d.p., “It used to be stock that you’d want from the same batch, and now it’s lenses.” Raval echoed Lifford, commenting on the differences in character and feel between lenses from different manufacturers and eras. For Sunset Stories (pictured above), Raval says he was “lucky enough to get a lens set” of Nikon prime still lenses to use with his Canon 5D.

3. Use the lens you need. While Raval used a set of Nikons on his shoot, he did go outside of the Nikon family for one other lens when he needed to. “I had one lens, the [Canon] kit lens, that had image stabilization. Using a small camera like this means that it can be very shakey. We used a shoulder mount but sometimes, when shooting inside the car, I would use the kit lens with stabilization.

4. Location, location, location. “If you don’t have a budget for lighting, the most important thing is to make sure you don’t wind up in a location you can’t make look good,” advised Lipes. Raval, who shot Sunset Stories with a lighting kit consisting of three lights and two gels, said he looked for colorful locations with ambient light. “The Canon 5D allows for a lot of available lighting,” he said.

5. Shoot it flat. When Raval shot a short film, The Fickle, on the Alexa, he “shot it flat” so the director would have post-production options in color timing. To calm down the director, who was worried about the look, Raval used the Alexa’s color profiles to show him on a monitor what the final image would look like. “You can’t really do that with the 5D,” he said.

6. Don’t shoot it flat. “I do the opposite thing as PJ – I color in camera,” said Lifford. The Austin-based d.p. noted that on some jobs, despite contractual requirements, he wasn’t flown to L.A. to supervise the color correct. So, he likes to develop a look with a director and bake it into the footage as much as possible. “I love the idea of cameras like the RED, where you can reframe and recolor your film in post,” he said. “But there’s something about that taking away of the [on-set] decision-making process that bothers me. I tend to try to almost force a director to stick with a look we have come with ahead of time.”

7. Think about focus. For Sunset Stories, Raval often “opened up the Nikon still lenses really wide, and suddenly the depth of field was zero. You’d even get shots when one eye was in focus and the other not.” Consequently, it was important to think carefully about the desired focal point of a shot. When it came time to travel to New York to shoot Jonathan Lisecki’s Gayby, Lifford decided to bring along his trusted camera assistant because she “can pull focus like nobody’s business.” Besides, he added, “I knew we wouldn’t have much time for lighting.” (Lifford wound up training someone who had never gaffed before as his gaffer.)

8. Embrace your limitations. “Limitations are helpful,” says Raval. Sunset Stories’ small G&E package forced Raval to “go with available lights,” which worked out great. When Lipes shot Lena Dunham’s Tiny Furniture in Dunham’s parents’ white-walled apartment, he and Dunham decided to embrace the location’s colorlessness. “If you’re locked in to situations like that, make it part of the aesthetic of film,” Lipes said. “If you can’t fight something, embrace it. There’s a lot you can do with your brain.

9. Lighting — keep it simple. “I light the same if it’s film or video,” said Raval. “I like to accentuate what is already there, like a beautiful light coming in from the window, and I’m a big fan of using very few sources. Often times you can be on set and there are 20 lights pointing in every direction, but it’s nice to be simple.” Lifford agreed. “If you are sourcing from a few directions, the white-walled apartment is the enemy of cinematographers,” he said, “A good way to combat that is to use fewer sources so you don’t have shadows going every which way. The hottest point can be coming from the window, and then you can augment that with fill.” “My biggest pet peeve is blown-out windows [on indie films],” added Lifford. “As much as possible, I’ll try to expose for the windows.” For Gayby, Lifford’s package consisted of “two Joker Pars, a handful of Kinos, and a couple of harder Fresnels to rimlight people.”

10. Don’t give up on film. “A lot of people are giving up on film, and that’s a tragedy,” said Lipes. “And it’s sad that movie theaters are only projecting digitally now, because it doesn’t look as good.” Lipes said he tries to think about the best format for every project, and if it’s film, to try and find a way to shoot it. “If it’s not possible, we’ll find another way,” he admits, saying he shot Girls on the Alexa, “which was not my first choice, but it worked out pretty well.” But for Opus Jazz, which he directed as well as shot, Lipes waited three-and-a-half years for a budget that would accomodate an anamorphic 35mm film shoot. “The person who inspired the movie, [Jerome Robbins], only directed one film [West Side Story], and it was on 70mm. We wanted to live up to his legacy by shooting on the highest quality possible.” As for film vs. digital when it comes to low-light situations, Lipes said, “When I shoot film I underexpose it a lot, so it’s just as fast as the Alexa. I can shoot natural light easier on film.”