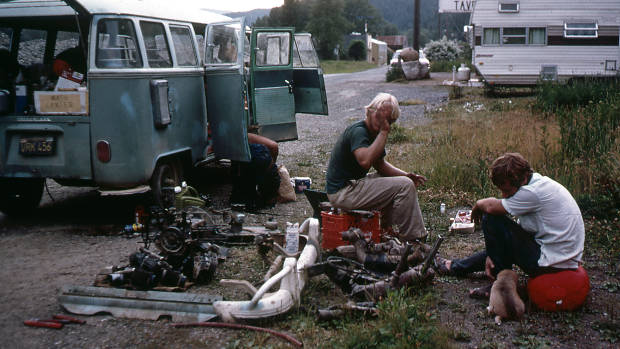 by Oakley Anderson-Moore
in Distribution, Filmmaking
on Dec 20, 2012

It had been two days since the last day of the IFP Distribution Lab – ending the yearlong 2012 IFP Fellowship for 10 documentaries and 10 narrative films from first-time directors.  With two days left in New York, I found myself sitting in a small theater in Brooklyn looking nervously at the backs of heads.  A small handful of people had cruised over on this rainy Sunday for a test screening of my first feature documentary, Brave New Wild.   Every time a punchline went unheeded, I swigged a Dixie cup full of cheap red wine.  It’s very scary to show the film you’ve worked on for years to a live audience, knowing that it’s both the ultimate expression of your individuality and something you desperately need others to like, laugh at, or approve.

And no sooner do you get used to the fact that people will watch your private work and have their public opinions about it, good or bad, then you begin the proverbial dog-and-pony show: distribution.  Despite all this internal dialogue, the IFP Distribution session left me hopeful about the process because it empowered us with smart, creative and satisfying options.  If you are about to get to distribution on a film, here are a few things that I thought were worth thinking about:

Sure, it’s really useful if you can premiere your film at a top-tier festival because maybe this will put you on the radar of industry players who could make your dreams come true.  But the honest truth is that every year, really wonderful films don’t make it in to those festivals.  Some become wildly successful regardless.  Some films that do premiere at a top-tier festival disappear with nary a buzz.  So “get in to a top-tier festival” should not be the extent of your strategy.

Start considering your film festival run as a bonafide theatrical run where you get to show your film in theaters to audiences across the country (or world).  For many films, it will be the extent of your theatrical distribution, and you might want to harness the press and connections with audiences at festivals to launch your film.  Are you going to sell festival DVDs?  What’s going to be on your website during the fest that people can look at from their smartphones?  Are you going to ask for screening fees? When and how and why?

When you’re making your first film, the hazy distribution “plan” sort of starts out as two imaginary steps: 1) get into the Film Festival of your dreams 2) next thing you know, a deus-ex-machina distributor swoops in and your film is screening nationwide at Big Shot Megaplex 2000.  But in this [rare] traditional model, one distributor gets all your rights for a long, long time.  And because it costs a lot of money for a theatrical run, cross-collateralization means unless you get money upfront, you’re not going to see any.  Not to mention, you don’t have any say in how your film is put out there.

If there’s anything that Jon Reiss (Think Outside the Box Office) won me over on during the Labs, it’s that forgetting about the traditional model and splitting up rights may be the best thing for your film.  When you split your rights up, for example, you can sell your broadcast rights to whatever TV channel you can book, sell your digital rights to a digital aggregator who can get you on iTunes, and then sell DVDs and merch off your website/ via a fulfillment company, etc.  You can tailor strategies that you think will work for your particular film and audience.  A few things to keep in mind when you actually get down to parceling these off:  don’t give rights to an entity that doesn’t have a history of making money off those rights, don’t give exclusivity unless you’re getting paid extra for it, and think about a reversion clause – where you get your rights back if a certain amount of time (6 months, 1 year) has elapsed and a minimum amount hasn’t been earned on those rights. It sounds a little daunting as a filmmaker to go in and negotiate these things, so if you don’t know if you’ll have the chops, hire a lawyer to negotiate for you.

Creating a month or two tour of one-off special event screenings can turn your film into an amazing theater-going experience.  Use the network you’ve been growing while making your film to get a full house where the audience is engaged, excited, asking questions, talking to people in the film, maybe even dancing and drinking a beer with you–and thinking about it all week afterwards.  All the while, spread the word of your film, sell some DVDs, special merch, and promote for your digital release.

As Dylan Marchetti from Variance Films pointed out, if you call a theater and let them know that you sold out your last screening, and want to book their theater for a Tuesday night for your next one, odds are they will be interested.    The world is your oyster, as long as you are willing to put in the time and effort.  If you’re trying to move on to your next film as part of your goals or have a rigid work schedule, this probably won’t sound as desirable, but as for my producer Alex and I, we’re looking forward to packing the ’76 VW van we filmed our doc in, and living the er, dream, for a month with the film.  Of course, you often barely break even on a theatrical run like this – but independent film has always been a pretty lousy get-rich-quick scheme to say the least.  At least this way, you can make a film, build an audience, work on the ancillary market, and have some bargaining power when you start on your next film.