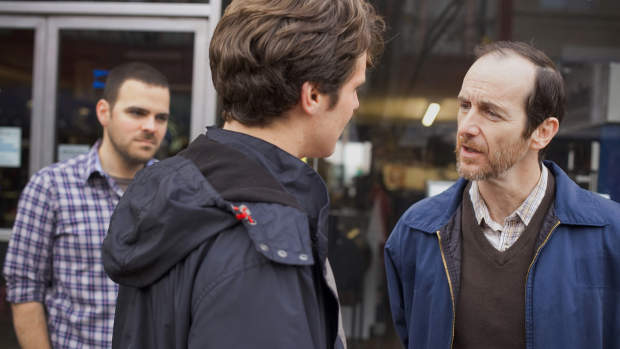 Alvarez (background) on the set of C.O.G. with Jonathan Groff and Denis O'Hare

by Kishori Rajan
in Directors, Filmmaking, Interviews
on Jan 16, 2013

Industry veterans and fresh faces alike are descending onto Park City this week, and for filmmakers with premieres it’s a heady mixture of excitement and anxiety. Writer/director Kyle Patrick Alvarez is among this crowd, ready for not only his film’s first screening, but his personal festival debut. It’s a significant career-high for the second-time director, but Alvarez is approaching the week with the well-worn wisdom his first feature brought.

Alvarez wasted little time in launching his industry career. Immediately after graduating from University of Miami’s film program, Alvarez moved straight to Los Angeles and landed a job as Warren Beatty’s personal assistant. It was a position with specific challenges – “a pavement pounding-getting coffee kind of job,” – but a valuable education for someone new to the L.A. scene. Perhaps the biggest benefit of the gig was meeting producer Cookie Carosella during this period. “I don’t seek out emerging talent,” Carosella wrote over email. “I was fortunate to meet Kyle early in his career,” adding she watched his student shorts and they were “well written, directed and shot, and one was hilariously funny… it was clear to me that Kyle was very talented and would have a great career ahead of him.” After a year of working with Beatty, Alvarez took stock of where he was and what he was doing. “A year doing the job – it propelled me to ask myself, ‘Why am I in this city?’” Soon after, Alvarez handed in his two-week’s s notice, and less than a year later Carosella had a script for Easier with Practice in her hands.

Easier was born out of an autobiographical article by Davy Rothbart, who’s perhaps best known for his work with This American Life. Alvarez optioned the article after a self-education on contracts and options (something he “does not recommend, especially without a lawyer’s help”) but his persistence paid off in the end. Easier rolled into production and Alvarez’s directing career began.

Of course it wasn’t entirely that simple, but the financing for Easier with Practice did come together relatively easily. “It was the pre-Kickstarter Kickstarter,” says Alvarez, explaining how he pieced financing together from numerous personal and professional sources. Easier wasn’t made with the now-typical anemic microbudget funds that most first-time directors use; he credits his relatively healthy-sized budget to the pre-recession mindset. (Easier with Practice was filmed in 2008). “Money was more accessible at the time, and people weren’t as conservative with their money, at least when it came to investing in films.” But the economy’s health wasn’t the only factor that helped move financing along. Alvarez actually found that having the first-time director label helped him; people wanted to give him money because of this fact, not despite of it. “It was actually an easier pitch – you’re investing ‘in me.’ I’ve never made a film, I’m trying to get this done.’ In a weird way it made for an easy narrative when reaching out to people.”

The film premiered at CineVegas, before launching into a lengthy festival run that lasted for a year and a half. Although the film picked up several awards on the fest circuit, culminating in an eventual Spirit Award nomination, it was a tough experience in many ways. It was 2008-09, and the film industry was in a tailspin. “It was the hardest time to sell a movie,” says Alvarez, “and it didn’t help that we got an NC-17 rating.” The movie eventually sold its DVD and VOD rights and did a self-theatrical release in New York and L.A. The movie did “lose some money – that’s the truth of it.” But the professional gains were worth the leap. “It was the best experience possible as a director,” says Alvarez. “As a producer, it was a learning experience. Without the Sundance label, you had to put in more work to make sure the movie got consideration. Now being on the other side with a movie about to premiere there, I’m really grateful – but I’m aware how thin that can be at the same time.”

C.O.G. (acronym for the phrase “Children of God”) is based on a memoir piece from famed writer David Sedaris, an essay from his bestselling book, Naked. Approaching Sedaris with a film adaptation pitch takes some gumption, but going through the process with Davy Rothbart helped quell some of Alvarez’s anxiety. “I was prepared for Sedaris to say no, and to respect that.” Alvarez went to one of Sedaris’s readings, approached him directly and handed him a copy of Easier with Practice. “I told him that I had things that I’d love to talk about with him; I said to take a look at this movie. The Davy Rothbart element, whom Sedaris knows, probably helped.” But what was ultimately key to his strategy was his specificity of the story. “There have been a lot of attempts before to get Sedaris to adapt his work, but the problem was that people wanted to focus on his whole family, to view his work collectively. It can be awkward for people to have a movie made out of their own lives. I was adamant that I was not trying to take his life and recreate it for my own film purposes.” Alvarez, who has read every piece of writing by Sedaris, insists that C.O.G. is an inherently cinematic story that would have narrative value as a movie whether Sedaris was part of the equation or not. “I didn’t wake up and say, ‘Oh, I want to make a David Sedaris movie.’ I wanted to make C.O.G.” The approach, of course, worked.

Raising money this time around, however, was significantly more difficult. Alvarez was insistent that he didn’t go back to investors he worked with before if he hadn’t made them money the first time around. Not being an entirely fresh face also didn’t help. Even though he was now repped by UTA, his life didn’t suddenly change because of it. “Unless your first movie makes a ton of money, there just isn’t a golden ticket the second time around.” Carosella, who produced both films, agrees completely. “Raising money for Easier with Practice was much easier than C.O.G.” citing the economic climate as the primary culprit. “We had a great cast attached, plus the unique quality of being the first movie ever produced that was based on a David Sedaris essay, with his permission. But the economy tanked and money for indie films was scarce. We garnered a lot of interest and met with everyone in town (and out of town) but couldn’t raise the funds.” They eventually found producer Stephen Nemeth, who ultimately brought on the investors to get the movie together. Alvarez acknowledges that financing could have come together more quickly if he had relinquished some creative control – namely, the ability to have final say in who was cast. “The only thing that gets me riled up is when I can’t be trusted to cast the film. If I’m not trusted to cast the film, I can’t be trusted to make the movie, either. I firmly believe independent films work best when they have an element of discovery to them. There are so many terrific actors out there, and it’s something worth fighting for.” C.O.G. stars Jonathan Groff, and Alvarez believes that if audiences respond to the movie at all, “it’ll be because of Groff’s performance.”

It’s worth noting that C.O.G. is shorter, funnier in tone and generally more accessible than Easier with Practice, which had a more melancholy feel. Alvarez says that it wasn’t a marketing decision to make C.O.G. that way, but rather a simple desire “to do something different.” And perhaps more significantly, C.O.G. was made on a smaller budget than Easier with Practice. Both Tze Chun and Craig Johnson, directors profiled in this series previously, used their second feature to work with a significant budget increase – Alvarez did the opposite. “This is the new normal, I believe,” says Alvarez of the budget size. “I certainly don’t want to be in the business of losing people’s money.”

With Sundance imminent, Kyle is reflecting on his time with Easier with Practice as he and his team get ready for their big premiere. “I feel very protected and prepared this time around in terms of whether C.O.G. hits big or not. I’m approaching it cautiously. There could still be a long battle ahead to get it attention, and I’m prepared for either to happen. [Sundance] is the best fest we could premiere at, but I’m prepared for all range of outcomes.”

C.O.G. wasn’t accepted in the final round of cuts for the Sundance Screenwriter’s Lab, but the movie itself was selected for the festival. We discussed at length the difficulties of programming for festivals in general– “it’s a job I have a lot of respect for,” he says – so I asked him if he had any thoughts as to what made the festival take notice of the final product. He says the “cynic in me says the Sedaris angle helped a lot”, but he acknowledges the film’s strengths as well. “I tried to be really bold and take a lot of risks in terms of tone and where the narrative goes. I think it has a bit of an edge that might have been exciting to them – but I’m really not sure.”

Does the Sundance admittance provide him with a sense of legitimacy that might have been absent before? Although Alvarez insists that it doesn’t really change his view on himself, he acknowledges that other people will look at him differently now, and that there’s real value in that. “[The first feature] makes things a bit easier in terms of others trusting you and understanding where you’re coming from…the Sundance label gives other people in the industry a certain shorthand and immediacy in understanding what kind of filmmaker you are and looking to be.”

Kishori Rajan is a New York-based producer and the Development Executive at Durga Entertainment. For more, follow her on Twitter: @Kishori