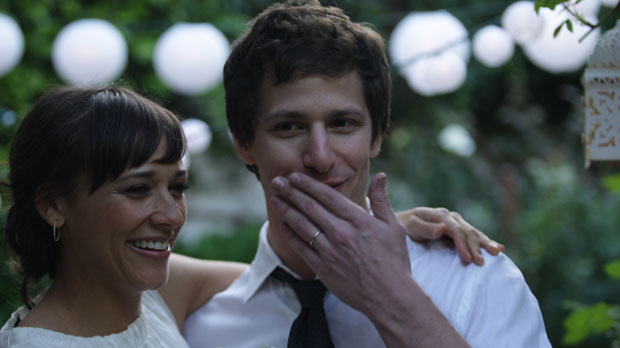 You’re most likely to know Rashida Jones as part of the great cast of the award-winning TV series Parks and Recreation (though she says she’s often recognized for her small role in Freaks & Geeks), but Jones is more than just a talented performer. She’s a dynamic and versatile artist alternating between acting and writing (not just for the screen either!), and in the case of last year’s Celeste & Jesse Forever, both. Her first screenwriting credit has acquired a lot of notice, and we were able to pick her brain a little in the midst of her success, which includes critical acclaim and an Indie Spirit Nomination for Best First Screenplay. Celeste & Jesse Forever debuts on Blu-ray and DVD February 5th from Sony Pictures Home Entertainment, and on that occasion, Rashida Jones spoke to Filmmaker about her movie, screenwriting and her multi-faceted career.

Filmmaker: Can you tell me about your history with screenwriting? How long have you been interested in writing a movie?

Jones: I have always wanted to write but was paralyzed by insecurities about it. I guess I wanted to do it professionally from as young as eight (I recently found a school report about “what I want to be when I grow up” and I said screenwriter. Must have blocked it out). In college, I was surrounded by writers, great writers, and I never felt worthy of the title. Then I figured out you just have to do the work. That’s how you get the title.

Filmmaker: Celeste & Jesse Forever feels at odds with the onslaught of formulaic romantic comedies we get every year. How do you feel about the state of the genre and was this a conscious attempt to break out of that mold?

Jones: Will [McCormack, Jones’ co-writer] and I were definitely aware of the genre and conventions we were writing in and hopefully writing away from. I love rom coms and I do think the genre has suffered from dilution and a lack of quality control. Rom coms used to be for smart, emotionally complex people who want to laugh and cry and be left with something (Annie Hall, When Harry Met Sally, Broadcast News). Not just someone looking to escape to an improbable world where the woman is perfect and made even more perfect by finding a man. We wanted to find a fresh way to invert the genre or start the story off at a different point, i.e., where the story usually ends.

Filmmaker: It’s rare to have a film that’s so fair to both sexes. You co-wrote Celeste & Jesse with your friend Will McCormack, and of course Lee Toland Krieger directed it — do you think the film’s intelligent treatment of both men & women comes from the nature of the collaboration and was that one of your goals?

Jones: Thank you for saying that! And yes, I don’t like the notion that movies have to cater expressly to one gender because it’s not true. Will and I are very close and have very similar senses of humor. I think it helps that I have some masculine energy and he has some feminine. We balance each other out. I think a lot of modern relationships have looked to abandon conventional gender roles but still feel challenged by them and we wanted to show that. Jesse is a beta. He struggles with being a man. Celeste wants to control and learns the hard lesson of seeing more grey in her life (the typically male role in a rom com).

Filmmaker: I was at the Whistler Film Festival where you received a Trailblazer Award and did a Q&A. You alluded to an embarrassing event in the film that actually happened to you. I’m quite sure I figured out what it was, but would you be willing to divulge this unfortunate experience?

Jones: Yes. I mean I put it in a film for the world to see, no point in being bashful now. I went on a date and maybe I was a little tipsy. The guy and I were making out at his place and he just started taking care of his business. Shamelessly. I was in shock. I’m co-dependent so I try to help but he really wanted to do it alone. Good Lord.

Filmmaker: How do you balance all of your ambitions (acting, writing, comic books) and do you have any other ones we can look forward to (directing, for instance)?

Jones: I don’t really know. No sleep? No personal life? Yes, I’d like to direct. Very much. Which means I may never sleep again. No, I feel incredibly lucky to have all these jobs that satisfy very different parts of my creative hunger. I get to show up at Parks and Recreation and try to be funny with some of the funniest people on the planet and then I get to go start from scratch and create a new world which is like a giant crossword puzzle. And I love crossword puzzles.