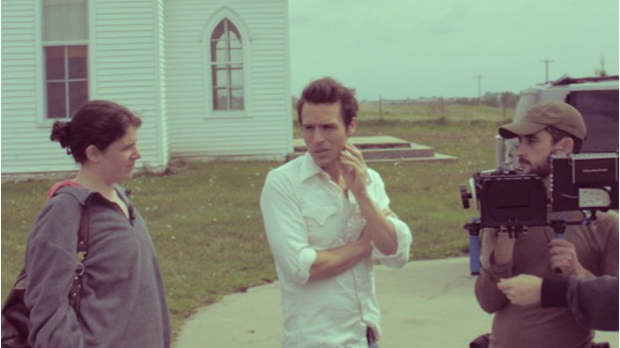 by Isaak James
in Directing, Filmmaking, Production
on Feb 15, 2013

Lumière, Cohen, Zucker, Farley, Duplass, and Polish. All siblings in cinema. Are siblings just genetically inclined to be good partners? My sister Eva and myself are not your garden-variety filmmaking partnership. We’re brother and sister, bound by shared nature and nurture. We formally joined professional forces in 2003 and founded Last Ditch Pictures, now a full-service production company spanning the gamut: commercials and industrials and shorts, editing and scoring and visual effects, and — closest to our hearts and common circuitry — features.

I sat down with my sister over the weekend, having just completed post production on our fourth feature film, By Way of Home, and answered the following questions to see if we could figure out what makes our relationship work.

What is the earliest filmmaking experience with your sibling you can remember?

Isaak: Every weekend we’d get the same story from our friend Andrew. “The Mahoney twins got a video camera!” These words sent us barreling into the woods to make a great movie, what we hoped could best be described as the lovechild of Indiana Jones and The Goonies. We assembled our crew and headed to our location. I directed the players who almost certainly would have rather been playing kickball or Nintendo, and my sister produced working craft options (mainly bologna and PB&J). All of these productions ended in total failure. On good days the group would furtively defect after lunch to play Double Dragon at the local arcade. On the bad days massive riots would break out amongst crew, actors would be stranded in a high trees for hours covered with mosquitoes. In truth our shooting locations looked more like satanic ritual grounds than film sets but we didn’t care. We were dreaming big. We still are! (I never actually met these twins and to this day am uncertain of their existence)

Eva: I can’t think of a time when we weren’t planning on making something. After we got the family camcorder, it was all over. This footage exists somewhere in our parents’ basement.

Why do you make movies?

Isaak: I make movies because I love it. Every aspect of it. Casting, directing, shooting, editing, scoring. Film allows me to explore all of my interests in one medium.

Eva: Because I can’t think of anything else in the world I would rather do. Other than marry George Clooney. (And I would still want to make movies!)

Why do you work with your sibling?

Isaak: For a long time I thought that I worked with my sister because it was “easy” or “natural.” And obviously, we’re comfortable around each other, we share a history, a common sensibility and so on, so that makes things easier on some level. But over time I’ve realized it’s more than that. I work with my sister because as a team we are able to get things done, seemingly impossible things. We’re like the Wonder Twins.

Eva: My brother tolerates my crazy, and I respect his talent and his creative vision. He’s an amazing artist.

What’s your role in the brother-sister filmmaking relationship?

Eva: My job is to boss people around, get stressed out and make things happen.

What are your strengths?

Eva: I like to be in control. OF EVERYTHING. Producing is the perfect excuse to be a control freak.

What are your weaknesses?

Eva: Twizzlers on the craft table, and constantly confusing the words pan and tilt.

Do you feel you complement each other?

Isaak: Yes, most certainly. When we started out we both wore a lot of different hats. We were basically doing everything. Holding cameras, booms, acting, directing, costumes, you name it. Over time, however, after working on things other than our own micro-budget features we started falling into our natural positions. Eva as producer and myself as director. Eva is the mouthpiece, she’s the organizer. She takes care of the big stuff in terms of production. While I’m setting up a shot she’s making sure that the lights arrive on time, the client is happy, the location is paid for and that we don’t go into overtime. Eva also has the ability to take a step out of the nuance of the work and look at the bigger picture. Her view is broader than mine and I think it’s important to have both.

Eva: Absolutely. We’re very much alike but in some ways yin and yang. Somehow it works, although technically speaking Leos are fire signs and Capricorns are Earth signs.

Did you and your sibling have similar interest/influences in film growing up?

Isaak: From an early age, we’ve both been music lovers. In fact, my little sis turned me on to a lot of music that I would have never known about. My interests had been very narrow — I was a huge Elvis fan, I loved ’50s and ’60s music. Eva kept me current, introduced me to Cindy Lauper, Prince, Bonnie Rait, Tracy Chapman, etc., all that good ’80s junk. We also used watch a lot of TV together. Our folks were in the restaurant business so we would just watch TV at night while they were working (downstairs as the restaurant was in our home). We watched all the movies on HBO and pre-“Skinemax” Cinemax. We even had full movie scripts memorized. I think we were certainly shaped a bit by movies of the ’80s — Desperately Seeking Susan, Howard the Duck, Teen Wolf. I’m not sure how much of that resonates in our work today. It must in some strange way. Actually, we cast Michael E. Knight (All My Children) in our second feature film, Hungry Years. Michael had starred in a film called Date With an Angel back in ’87 that was on the HBO rotation back in those days so that was certainly a throwback to our roots.

Eva: We grew up in the 80s, we watched and loved all of the same shows and movies. Although, I don’t think Isaak was a member of the Tiger Beat, Jason Bateman fanclub — so there! We were a little different!

Do you fight on set? If so about what?

Isaak: Yes, we fight. We’ve gotten better about it over the past couple of years, but it still happens. Along with that sense of familiarity comes a lack of boundaries at times. We really know how to get to each other and that will some time lead to huge blowouts. Fortunately, it’s not like having a blow out with a total stranger. We have the ability to forgive each other and keep moving within minutes (most of the time). We generally fight over stupid, petty things. Artistically, we are generally on the same page by the time we get to the set.

Eva: I think in the beginning of our career, maybe. I do recall some hair-pulling on set, back in the day. But no, we’re mostly really professional about being professional.

Do you think other people understand the brother-sister dynamic?

Isaak: Not always — I think it takes some getting used to. Lots of times brothers and sisters have a built-in dynamic, they are perceived as linked together. So sometimes I think people can feel a bit outnumbered.

Eva: Not really, people think its odd. “You work with your brother!? I could never work with my brother” I get that A LOT. It’s weird, but for me it would be weird not working with my brother.

Is there an equal balance of power?

Isaak: Well, I am the bigger brother so at first I think I usurped a bit more power over things. But now I think the balance is pretty equal. It shifts back and fourth a bit depending on the project.

Eva: My older brother will always be someone I look up to, it just so happens I look up to Isaak as a director as well. We share a mutual respect for one another, that’s really the key to making our working relationship, or any relationship for that matter work.

Does your personal life get mixed in with your business end of things?

Isaak: We’ve learned early on to try and resolve all outside issues before getting to the set. When we’re on set the focus is the project and making sure we do the best job possible.

Eva: No. I feel we have both worked really hard on keeping business, business. In our case our business is our pleasure, so we talk about film and filmmaking often, but we arrive to set as two people doing what we love. Filmmaking to me is a collaborative process, that’s what makes it fun.

Would you have been able to create your latest feature with anyone but your sibling?

Isaak: By Way of Home is a supremely personal film for us and, in a way, I feel like it was really getting back to the basics for us. A single commercial for a client can have a budget greater than that of all our films combined. And although we’ve been known to complain about lack of funding for independent features, we’re reminded that an intimate story with a smaller production footprint always gives us a better film. It’s not just about control, it’s about preserving the sharpness and specificity of our vision.

An alarming number of friends and people in our circles were being sucked into the boomerang generation, being forced to move home with Mom and Dad and try to get their bearings in the midst of the economic crisis in the U.S. A generation interrupted. So along with the help of Whitney Parshall (producer and actor) we developed a story. I penned a script and we headed home (Cape Cod, MA) with a borrowed 5D. Over the course of 20 days, armed only with a crew of three, available light, and locations, transportation and food provided by our family and the community we made a movie. We even played brother and sister, and our parents played our parents, so obviously this something I could never have done with someone else. It was almost as if we had thrown ourselves into a film and simply recorded the outcome… We were truly living it. The process has been unexpectedly liberating. The bare bones of principal photography allowed us to concentrate on the story. We’re making the movie we want to make.

Eva: NEVER. NOT A CHANCE. NEGATIVE.

Will you work solo at some point?

Isaak: I think we will always work together in some capacity.

Eva: I certainly hope not! Aersosmith is still together making music. We’re like Aerosmith, except we’re constantly arguing over who gets to be Steven Tyler.