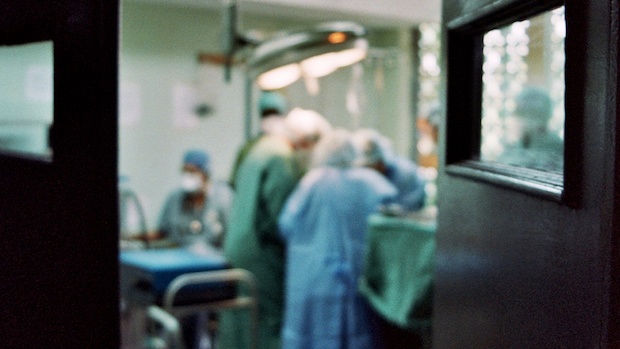 by Scott Macaulay
in Directing, Filmmaking
on May 7, 2013

Although the title of this column may make you think of “writer’s block,” filmmakers can be blocked by external forces as well as internal ones. In last week’s post, Drew Whitmire wrote about the internal factors — a relentless perfectionism and self-questioning — that have prevented him from finishing his first film. In today’s post, Jessica Vale writes about a series of events that brought her to Liberia to shoot footage about a medical mission there, a trip that led her to then embark on a larger feature documentary. But a number of factors stopped that feature in its tracks even as much of its footage was shot and edited. Vale’s tale has a happy ending as her experience led to the creation of a different film, Small Small Thing, which recently won a prize at the Dallas International Film Festival. But seeing her original film shut down still smarts. Below, Vale tells her story and offers advice to other filmmakers who find themselves in a similar position. — SM

In 2008 I was given the opportunity to go to post-war Liberia on a medical mission with a private group affiliated with a major NYC Hospital. My friend “Sam” was going as medical student and referred me for the gig. They wanted me to film the two-week mission and create a 10-minute short which they could then use for fundraising later on. “Sam” would help, in return for co-producer credit. They would pay for my airfare but there was no film budget. I’d have to take off work to go, so I needed more incentive. We made a deal that if I produce the 10-minute short for free, but I felt there was enough material for a feature, I would make one. All my communication with the hospital itself went through “Sam.” We did all of this on a handshake. Mistake Number 1: no contract

I’d been working in non-fiction for eight years at this point and had built up a lot of favor points. I got two donated cameras (one for me, one so “Sam” could shoot) Off we went to Liberia, and the trip was flawless. So good, in fact, that I had amazing material for a feature. Back in NYC, I got an AVID room donated and made the short on my evening time and weekends. I brought up the feature and everyone was on board. Seeing this as an amazing opportunity, I went full steam ahead.

“Sam” was in med school full time, but found an anonymous donor who wanted to invest $80,000 into the film. I explained that all money should go through proper channels (i.e. our production company), but “Sam” insisted the donation go via the hospital, and paid out by the hospital. Despite my protests, I had no choice. It felt wrong, but we did need the money. Mistake #2: misplaced trust in a friend.

I shot extensive studio interviews with all the surgeons on the mission, about 20 people. Three HD cameras, DP, engineers, the full deal. My crew and studio time were all low-cost favors from professionals I knew that believed in the cause. Plus, “Sam” had received the first $40k from our donor and checks were cut as promised to my studio crew.

When the medical mission informed we they were returning to Liberia in a few months, I jumped on the chance to go back and shoot follow ups. Tickets were booked, gear secured. No “Sam” this time, just me.

We began the edit, and I hired one of the best editors I know. We went full time for two months, ending with a solid two-hour rough cut. At this point the medical mission director asked to see the film, and “Sam” insisted I let him. Despite my protests, “Sam” kept reminding me that he was the one with access to the money. So I caved. We had a rough cut screening and the mission director was not pleased. It was “too controversial” and not enough “Save the Children.” I explained this was a documentary not a TV ad, but he left upset. Mistake #3: showing a rough cut to the subject of the film

Arrived as planned, but when I got there, the mission director was very cold with me. Whereas last time I had full access to do as I pleased, this time they started denying me. An entire week of my time was supposed to me at a second location, but they told me not to come. And made it VERY clear it wasn’t negotiable. I attempted a meeting with the mission director (who for the past year treated me like family) but he was cold and dismissive. I knew something was very wrong. My film was dying.

When we returned to the U.S., I received a letter from the mission director’s lawyer. It demanded I hand over all the tapes, media and elements immediately to him, no questions asked. After devoting a year of my life to this film, and calling on countless favors for its production, there was no way in hell I was doing that. I had no choice, I hired my own lawyer.

After a harrowing few months, we reached an agreement. I could keep all the footage I personally shot (“Sam” kept his), but I could not get rights to discuss any work the hospital was doing, or its surgeons. I also couldn’t use the studio interviews since the checks to pay the cameramen came from the hospital. Plus, the hospital sent out a letter telling all the mission doctors they were no longer allowed to speak with me. (Luckily my good friends of the group didn’t listen)

That film was dead, but all was not lost. During the week that I was stopped from filming in Liberia, I met a little girl named Olivia Zinnah. A 9-year-old rape victim being treated at the hospital. Her story was amazing, and since I already had the camera gear, I started filming on the spot. My lawyer had managed to get me the rights to my footage shot in Liberia, which included the footage of Olivia!

That awful journey ended with a feature doc after all, Small Small Thing, which just won Second Place Best Documentary at the Dallas International Film Festival.

“Sam” and I have not spoken since I received the lawyer letter in 2009, and as far as I know, that money he raised was ultimately “donated” to the hospital itself. I’ve heard since that they pulled the plug because the surgeons were, in fact, doing controversial things by U.S. medical standards. The hospital didn’t want it getting out, which is still why it made a great doc. But I learned the hard way about getting contracts, releases, and never placing blind faith in a friend when it comes to business. — Jessica Vale