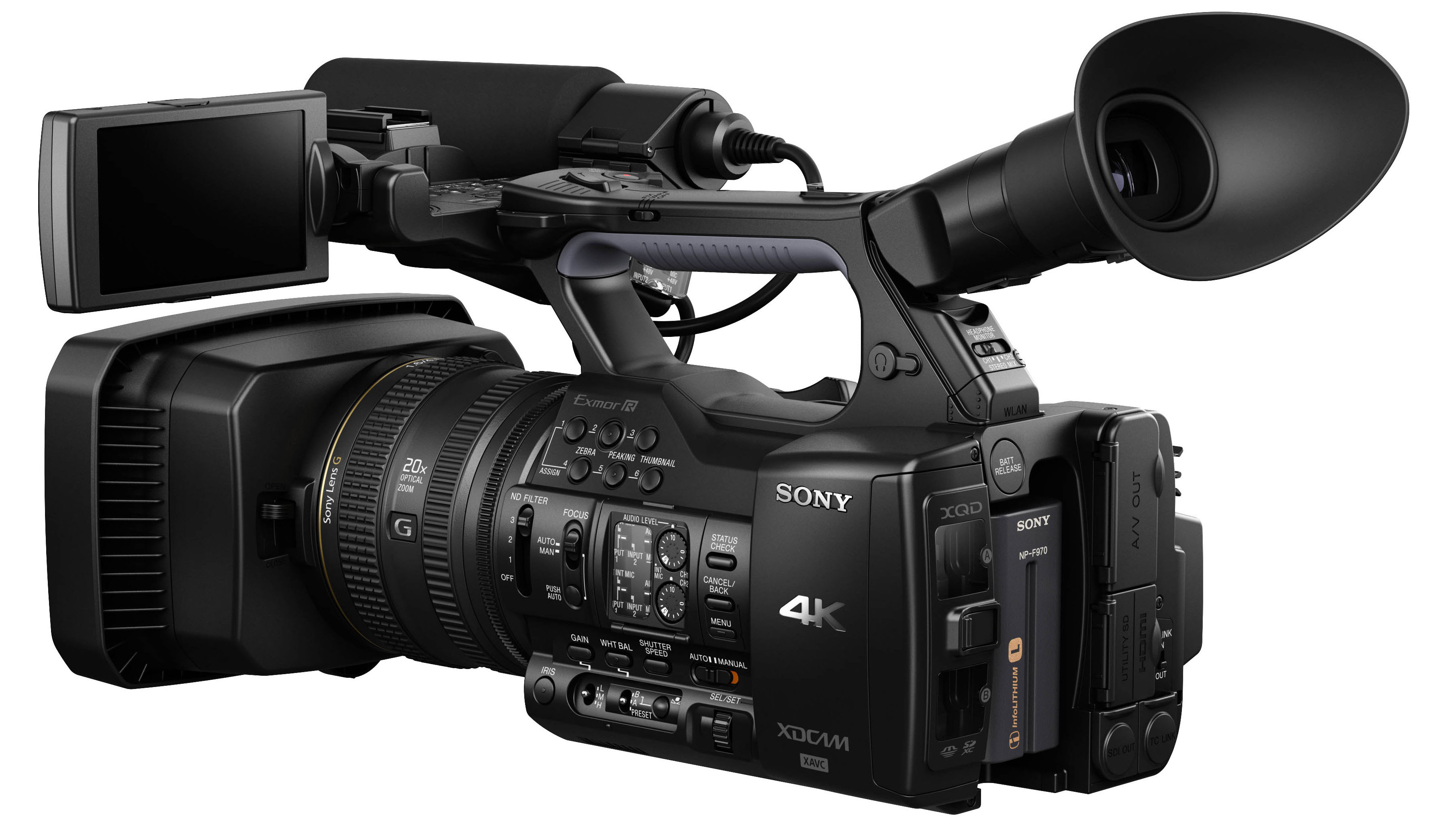 by David Leitner
in Cinematography, Filmmaking, Production
on Sep 5, 2013

Bucking the large-sensor trend I described recently in Filmmaker, the PXW-Z100 (from this point, I’ll detail the pro version only) contains a single 1/2.3-in. Exmor R CMOS sensor, a smidgen less than full half-inch.

At first glance above, the PXW-Z100 would seem to do for 4K what Sony’s epochal HVR-Z1 did for HD almost a decade ago: introduce affordable capture of the latest high-res format in a compact, hand-held camcorder with professional features.

In the case of the Z1, the key was highly compressed 8-bit, 4:2:0, Long-GOP HDV recorded to existing MiniDV tapes. In a word, MPEG-2. This time it’s different.

The Z100 records XAVC to a new type of solid-state, super-fast media called XQD, developed by Sony, Nikon, and SanDisk to supersede the 16-year-old CompactFlash standard. It resembles a narrower CF card. Blazing speed is needed because even with XAVC compression, 4K at 23.98p generates 240Mbps, while 60p can top 600Mbps! (Because of this, the consumer FDR-AX1 records 3840 x 2160 only, using 4:2:0, Long-GOP “XAVC-S” at lower bit rates.)

As I’ve written many times, 4K cameras make the best HD cameras due to oversampling. The Z100 records HD, like 4K, to intraframe XAVC – meaning 10-bit, 4:2:2, and downconverted from 4K, no less. A future firmware upgrade will add the economical, Long-GOP XAVC-S codec, borrowed from the FDR-AX1 to permit longer recordings of Ultra HD and HD. All Z100 files are “wrapped” using the MXF standard.

Output includes a single 3G-SDI connection as well as HDMI 2.0 – a spanking new HDMI standard coincidentally also introduced today – which can output 4K up to 60p via a single cable.

This isn’t a review — I’ve seen only a prototype Z100 — so I’ll stop here. But this camcorder looks and feels comfortably familiar. It’s about 6.5 lbs., with a fixed 20x Sony-designed “G lens” zoom, optical image stabilization and three built-in NDs. It uses familiar L-series batteries found on pro Handycams since MiniDV days. At the side is a zoom rocker switch with one-touch auto-iris up front and a button for focus magnification in back, under the index finger.

The only difference you might notice is the soft constant whir of a small fan at the rear, opposite the operator. 600Mbps is a lot of processing.

For the record, JVC introduced the first hand-held 4K camcorder, their GY-HMQ10, over a year ago at NAB 2012, but it doesn’t count. Nobody was ever going to shoot serious Ultra HD on four SD cards at a time. Imagine misplacing one of the four. Getting some version of “this card is unreadable” upon backup. The thought alone of backing up four times as many cards!