“Pull the Threads until it Unravels”: Advice from TFI’s Fashion in Film Event 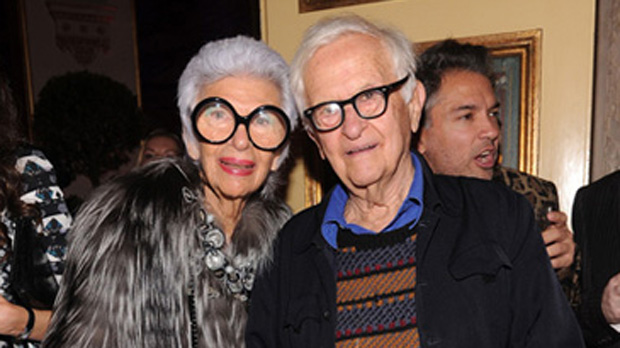 Director and cinematographer Christina Voros nicely summed up the difference between the fashion industry and the film industry at the Tribeca Film Institute’s Fashion in Film event Friday: “Fashion is sort of antithetical to film. The fashion industry is all about making sure the seams don’t show, that every thread is in place. Documentary is about pulling on the threads until it unravels.” She was speaking of the process of filming her second documentary feature The Director, about Gucci Creative Director Frida Giannini, but the sentiment was reflected in films and discussions throughout the two-day event.

At first blush the event, held at the Tribeca Cinemas in downtown Manhattan, might have seemed to offer more to fashionistas than cineastes, but there was plenty on display for the filmmaking crowd. When Matt Tyrnauer, director of Valentino: The Last Emporer (2008) jokingly asked Albert Maysles who he was wearing, the legendary director was stumped, eventually revealing that he loves eBay. The 92-year-old Iris Apfel, an equally legendary fashion and style maven and subject of Maysles’ next film (still in production after two years of shooting), also loves eBay–and thrift shops, antiques shops, and anything else–but she was much more effusive in describing her ensemble, which consisted of shoes, bracelets, and several other items of her own design, including a purse-cum-scarf made from Mongolian sheepskin; if an animal is killed for food, it turns out, there are much fewer restrictions about what can be done with its coat.

Apfel and other fashion experts imparted ample life wisdom for the young designers present, as well as the rest of us–“New York is it,” she said, for instance. “If you can’t find it here it doesn’t exist…. But it would be so much prettier if people would just clean up a little bit.” Meanwhile, the filmmakers in attendance were full of thoughts about the documentary and fiction filmmaking process. Maysles became nearly euphoric, for instance, in describing the glories of the close-up and the importance of finding a face like Apfel’s that engages you, and then not being afraid to film it, and film it, and film it. If you’re engaged, the audience will be as well. When Tyrnauer, who had several excellent questions about the direct cinema process, asked how he structures his films, particularly in creating the ever-troublesome third act, Maysles responded that he never does any planning. He picks subjects where there’s lots going on all the time, so there’s no need for any contrivances. “It will happen,” he said. “That’s the confidence a documentary filmmaker should have. It happens.” Later he added, “That’s the duty of discovery. I love that unknown factor and all the coincidences that take place. And if you don’t know what’s going to happen, the viewer doesn’t know what’s going to happen.” Structure, then, is much less important than trusting your subject and enjoying the process; if you do that, the final film will retain that spark that prompted you to devote months or years to it. And in this case neither he nor Apfel knew what the finished film will look like. “I need more of her at work,” he conceded, but Apfel dismissed this by saying, “That’s how I like it,” to which Maysles chimed in, beaming, “That’s how I like it too.”

Christina Voros echoed much of the same ideas. Since The Director premiered at the Tribeca Film Festival a few months ago she said one of her most frequent questions is whether Gucci controlled the finished outcome. The answer is yes and no: there was no corporate final cut proviso, but at the same time Gucci controlled access to Giannini and hence what could make it into the finished product: there was no 24-7 fly-on-a-wall shooting; it was more, “Next Tuesday from 2-4, then Thursday morning at 10:15,” etc. Voros quickly tired of only the red carpet events that Giannini’s staff would allow her to, and she learned that the best way to gain access was to circumvent the support staff and ask Giannini herself: nobody underneath her wanted to risk saying yes when the answer should have been no, but Giannini herself was quite liberal with her time and understanding of the need for backroom footage. Since the fashion industry is hyper-conscious of cameras, having them in fitting sessions was nerve-wracking (for them) at first, but again, as with all documentary subjects, time increased their comfort and eventually Voros was able to get highly engaging footage of subjects who seemed unaware of her presence. Like Maysles’ film thus far, her production process took over two years, and the vast majority of the finished footage came from the last few months.

This process, of course, created 300 hours of footage (shot by Voros, an accomplished DP, herself), so, in terms of finding the structure, she invoked the adage that editing a documentary is like putting together a jigsaw puzzle: first find the corners then the rest of the pieces will fit into place.

From the world of fiction filmmaking, costume and production designer Catherine Martin was the most prominent guest, with screenings of several of her films made with her husband Baz Luhrmann. In an evening session before a screening of The Great Gatsby Martin talked mostly about that film, but she also discussed her journey from aspiring fashion designer to school dropout to stage work to one of film’s leading designers. Her youthful ideals–to never do a musical, for instance, or never use the color brown (“Has anyone seen Australia?” she asked)–proved unfounded, but she’s gained a lot of practical experience, from fabrics and patterns to set design and camera placement, along the way. She echoed Apfel’s praise for New York City and its ability to produce any and everything–she loves that there are, for instance, multiple spandex outlets here. The result, she said, is that the city elicits excellence in every field.

Perhaps most importantly for aspiring designers, she also said there’s very little difference between designing a microbudget film like Strictly Ballroom and a multimillion-dollar picture like Gatsby. As the costs go up so do the expectations, meaning that there’s never enough money anyway. In both films they wound up transferring details from one group of costumes to another–ballroom dance gown sequins in the first film and butlers’ and chauffeurs’ livery details, in the latter–and for Gatsby she even soldered two of her own necklaces together and donated them to Carrie Mulligan’s neck. Baz, she said, asked her who the designer was after telling a reporter it was from a couture jewelry house, and her infuriated response was one of the privileges of being married to your director.

When an audience member asked about her process working as both a production designer and costume designer, Martin said inspiration worked both ways: sometimes costumes would influence sets, sometimes sets costumes, and sometimes they’d emerge together, as in matching Gatsby’s yellow suit with a mustard car. The increased workload doesn’t bother her because of this symbiotic relationship between the two departments, although she noted that overseeing set construction is much more managerial (“I pop in like the Queen and say, ‘And what are you making, young man?'”) while supervising costumes is much more communal: she’s in the same cutting room with all her cutters and they’re all feeding off each other and rooting for group success, checking off each time a new costume is complete on a whiteboard.

If there was an overall takeaway beyond paying attention to costumes and design, it was that resources are not nearly as important as enthusiasm, even at the level of an Albert Maysles or a Baz Luhrmann. If you need the shot, get the shot, and trust that, with some prudent editing, it will elicit the same response in your viewers that it created in you. And eBay’s a great place to clothe your crew.