Following the Legacy’s Lead: Barbara Kopple on Running From Crazy 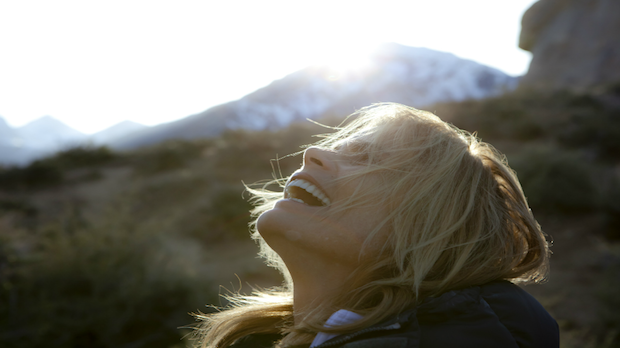 by Sarah Salovaara
in Directing, Filmmaking
on Oct 31, 2013

The name Hemingway carries a many numbered associations, “charmed” and “gifted” not least among them. But from the inside looking out, a far less sensationalized view slides into focus. Likening her namesake to Kennedy, Mariel Hemingway’s preferential description of her lineage can be summed up as “the other American family that had this horrible curse.” A curse — of suicide, depression, mental instabilities, drug and alcohol addiction — that is both respectfully and holistically probed in Barbara Kopple’s latest film, Running From Crazy.

The youngest of Jack Hemingway’s three daughters, Mariel was often at odds with the free-spirited nature of sisters Muffet and Margaux. While Muffet drifted in and out of mental institutions and Margaux carried on with modeling and addiction in New York, Mariel was left at home to mind her parents’ inebriated entanglements. Her great escape came in the form of a star-making, supporting role in Lipstick, a favor from Margaux that effectively usurped her own spotlight and damaged their already tenuous relationship beyond repair.

Kopple makes full use of Mariel as a resource in relating the underbelly of the Hemingway family history, but she also finds a wealth of alternate perspectives in archival footage shot by Margaux. The presence of Margaux not only haunts the film’s narrative, but Mariel herself, who has finally found closure in a controlled, healthy lifestyle and work as a spokeswoman for depression and suicide prevention. In speaking with Filmmaker, Kopple was keen to emphasize the importance of discussing these illnesses that unfortunately retain their status as social taboos.

Running From Crazy arrives in New York and Los Angeles theaters on November 1, and will run on OWN sometime in 2014.

Filmmaker: One of the more striking things for me about the film is the extent of your access, and just how boundless the world you’ve been welcomed into really is. How did the project begin, and what was your entry point?

Kopple: Lisa Erspamer, a good friend of Mariel’s, was a producer at the Oprah Winfrey Network, and she asked Mariel if OWN could make a film about her family. Mariel said, “No way, no one would want to see that, my family’s crazy.” And Lisa said, “Well, that’s the point,” which is pretty wild, but they’re good friends and you can say anything to your good friends. Lisa simultaneously called me and said, “How would you like to make a film about Mariel Hemingway and the Hemingway family?” I said, “Are you kidding, I would absolutely love that.” Mariel agreed to meet with me, we had breakfast together, and her daughters were there too. We were both on the same wavelength. I told her that if I was going to do this, I would try to do a film that would look underneath the whole Hemingway myth, and she said that’s exactly what she wanted to do.

Filmmaker: In one of the very first scenes, Mariel is driving in her car and speaking to the camera. Right off the bat, you get a sense for how candid she is, about her fears, about how people perceive her, about her family. Did you have to work to establish a level of trust, or was she so open from the get go?

Kopple: She really wanted to do this. When she made up her mind, and knew I wasn’t going to do some sort of reality series, she decided she was really going to talk about these things. She wanted to do it for herself but also for her own daughters, whom she had never really talked about these issues with. And further, because she cares about mental illness and suicide, and has become a preventative spokesperson for that.

Filmmaker: The dynamic she has with her daughters is fairly different. Mariel and Langley, her younger daughter, share a sensibility, but the older one, Dree, definitely idolizes Margaux. It’s interesting to see how supportive Langley is of her mother and her work, relative to the dialogue Mariel has with Dree, who can reroute discussions of mental health into opportunities to praise Margaux.

Kopple: I think that both of the daughters, like any daughters in their twenties, have issues with their mother and their father. I think Langley has felt depression at different points. She went on a prevention walk with Mariel, which was very eye-opening for her, and she also came to the [world] premiere at Sundance. It just changed her. No one had seen the film in fine cut except Mariel. I think Langley really liked seeing it. It was the first time she really knew her family, and it was the first time she would answer interviewers’ questions about her family. And you know, Dree has a huge career path with her acting and modeling, so much that she’s always traveling. I think she was in Africa when we were in Sundance.

Filmmaker: With this wealth of information — you’re dealing with multiple generations and multiple characters, from Ernest to Langley — did you feel like you needed to decide from the outset what you were going to explore and cover, or is that all done once you get into the editing room?

Kopple: I usually never have a plan. Any ideas or any agenda I may have had before about the Hemingway family, I just let all of that go out of my head once I’m seriously doing something. I just go for it, and try to not leave a stone unturned, and film as much as I can, of everyone one involved. I let them lead me, because you never know what you’re going to find. The filming process was probably about three or four months, back and forth to California and Idaho, but the editing process was much longer. I think the whole film took two to three years, largely because we found all this footage of Margaux’s. We found 43 hours of archival material that Margaux had shot, so the film became multilayered and rich, and a story, for me at least, of these three sisters. A tale of three sisters.

Filmmaker: Right. So Margaux had wanted to make a documentary retracing Ernest’s footsteps, which she never finished. Did Mariel hand that footage over to you?

Kopple: No. And I never told her I found it either. When we went to Ketchum, the first time to film Mariel, a friend of mine, a great sound recordist named Alan Barker, came with me. He said, “You know, Barbara, when I was starting out in 1983, I was a cameraperson. And I filmed with Margaux, here in Ketchum.” I said, “Are you kidding?” He said, “No.” And he gave me names of people involved — a lot of them weren’t around anymore — but we found out that this archive had all of this material, 43 hours, that nobody had ever seen. They said nobody had ever called and asked for it, no one knows what it’s shot on, what state it’s in. I said, “We will take it all. Please send it to us. It doesn’t matter what shape it’s in.” Every now and then, I would get these FedEx packages, and it would be like Christmas, all this new material. I didn’t tell Mariel because I wanted her to be herself, say the things that she wanted to say, without knowing there was all this other material. So when she saw the film for the first time, in fine cut, at the very beginning she saw a lot of herself. She was very emotional, and then she saw all of the material of Margaux, and her eyes went wide open, she sat on the edge of her chair. She was so moved, her mouth fell open, and she kept going, “This is incredible. Do you know that my girls have never seen their grandparents in footage or anything? Just a few family photos.” And she also said, “You know that when I would tell you our kitchen growing up was yellow, or robin’s egg blue, I didn’t know whether it was true or not, or if those were just my memories. Or if my mother actually sat on the kitchen sink with her legs crossed.” And also, we found this audiotape of Margaux, someone had interviewed her maybe a year or so before she died, and that is also under a ton of footage. That was so raw and incredible. She was an old soul by that time.

Filmmaker: The scene towards the end when Mariel goes to visit Muffet is pretty heart-wrenching.

Kopple: Yes. And a lot of the film is also about the glimpses of people that say a lot. When Mariel was showing Muffet photos of the girls, and says that Langley looks a lot like her, you just see the expression on Muffet’s face. She says, “Oh, that is so nice of you.” For me, it was very moving to watch that interaction.

Filmmaker: Let’s talk about Mariel’s lifestyle — her interest in horticulture, raw food, yoga, the outdoors, et cetera. When she talks about her husband being diagnosed with cancer, she treated him via diet and not chemo. She has these fears, that a lot of what’s plaguing her is genetic, and she’s able to fight back against it by what she puts in her body, and how she treats her body. And at the beginning, when she speaks of Muffet, she says the majority of her mental health issues resulted from LSD use. Where is the line between what’s hereditary and self-regulated?

Kopple: Mariel has these obsessions on the other end of the spectrum. She’ll climb up mountains, and dunk herself into freezing water. She has overly healthy obsessions. She has that Ernest gene, that challenge in her, where she faces fear and is not afraid to try new things. It’s what works for her, and what she believes.

Filmmaker: Do you see yourself in Mariel any way?

Kopple: I think we have a powerful connection as women, and a trust, and a dignity between us. There are things in everyone’s family that are difficult. There are trust and mental health issues, and depression and suicide, and no one is really exempt from that. We all have it.

Filmmaker: You’ve been making films for so long, how does this one fit in line with the rest of your work?

Kopple: I’ve done a lot of films about larger than life people: Woody Allen, Gregory Peck, Mike Tyson, the Dixie Chicks. This falls into line with some of the subject matter, and what I’ve been doing over the last many years. For me, it’s just about telling stories. This is a story about mental illness, suicide, and keeping your life in balance, and transformation, hope, family — so many different themes and issues. It was wonderful to tackle and wonderful to be part of so many human issues. I really feel that mental illness needs to be discussed. We have to love each other a lot more, and talk to each other a lot more, and help each other. We need to try and remove the stigma that we can’t talk about mental illness, and we can’t talk about suicide. There’s so many other issues — rape, AIDS, cancer — where we’re working through the stigmas, and this is a hugely important one because it deals with not only our well-being but gun violence, and really everything. It’s pivotal, and so important.