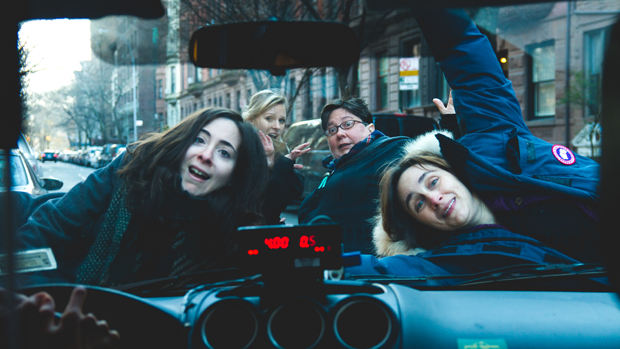 “How elaborate is the camera?” The Foxy Merkins director Madeleine Olnek texted me as I was walking to photograph her with her female laden crew at Columbus Circle. “We would like to stage ourselves being hit by a cab,” she explained simply and obviously.

As it happened, a few months prior to making The Foxy Merkins, a film about lesbian hookers, Olnek was in a taxi driven by a woman named Debbie. They got to talking and Debbie threw out the “If you ever need an [insert random gender, race, or career here]” phrase filmmakers always get. In Debbie’s case it was: “If you ever need a cab in your movie, give me a call.”

When Olnek’s movie was greenlit and she wanted to shoot an homage to fellow hustler film Midnight Cowboy where Dustin Hoffman almost gets hit by a taxi (“I’m walkin’ here!”) – she called Debbie.

And now, weeks after The Foxy Merkins got into Sundance and as I was walking over to photograph her crew, Olnek pulled out her cell phone again and just like that Debbie was on her way. Our shoot got delayed because Debbie got another fare just before I arrived, but because fellow director Desiree Akhavan (my next shoot of the day), who has a cameo in Olnek’s film, was very understanding, we decided to wait for the taxi shot. It was just too worth it.

When Debbie arrived, we all – Olnek, her producer Laura Terruso, d.p. Anna Stypko, and co-star and co-writer Lisa Haas – piled into Debbie’s cab and headed to the Upper West Side, where we proceeded to block traffic ever so slightly and briefly (read: totally) in order to get the shots we needed. Olnek directed the oncoming traffic with poise and grace and gratitude – emblematic, my guess is, of the same disposition she takes on her sets.

If you’d like to support the film’s Kickstarter campaign, please go here.

Below are my interviews with Olnek, Terruso, Haas and Stypko.

Olnek: I had always wanted to make a parody/homage to male hustler films with a female cast. It was an idea that had been long simmering in my mind. After my film Codependent Lesbian Space Alien Seeks Same premiered at Sundance 2011, we thought, why not try to shoot this film with my cast members as we are traveling together to festivals? Being at a festival can feel very uncreative, because you are promoting a piece of work that is already finished, plus I would be with two lead actors (Lisa Haas, Jackie Monahan) who had great chemistry as an odd “couple.” We started shooting at the Provincetown film festival in 2011, but we soon realized the idea of shooting at film festivals was unrealistic for the story we wanted to tell – despite its “road trip” aspect – and we settled down to trying to shoot the movie on the streets of NYC. The only thing that remains in the film from the Provincetown footage is a shot from a very nauseating ferry ride during high winds.

Olnek: Well, after our Provincetown stint (where my girlfriend/producer Laura Terruso had the camera) when we started shooting in earnest, it was d.p. Anna Stypko shooting, and me directing and booming. So it was only two people – but it was an all-female crew. Later we decided to add some crew members – specifically filmmaker Frances Bodomo and Victoria Mele – so there was a total of four (outside of myself) – it was also all-female crew. Later on (making this film was a very long process) several kindly gentlemen joined us for pick-ups. If my crews seem overwhelmingly female, it is not because I consider gender in filling roles, it is actually because other filmmakers are the ones considering gender.

Olnek: We are not stellar fundraisers, and our story is a familiar one in that we rely on help and in-kind donations, and we are actually launching a Kickstarter campaign to cover our wildly ballooning finishing costs – be the first to get your Foxy Merkins drink coaster! Or an Executive Producer title on the cheap! Look for it on Kickstarter under the project name The Foxy Merkins.

Olnek: I’m going to answer this in a way very specific to the idea of doing a female version of male hustler films – for a gentleman to take on that as a subject matter, the very impulse to do that, might be more of an impulse to laugh at women and their limitations, it seems like it would have to be kind of a mean-spirited impulse. For a woman to take it on is an entirely different impulse, because its based on our lived experience in the messy world of love and sex. It would be more a knowing humor that would have to be funny because it rang true. There also is an extended nude scene in the film, and nudity is a lot to ask of performers. I think my own self-consciousness of being nude – and the sort of oppressive idea of perfect body types that causes women to have so much shame about their own bodies – informs a kind of sensitivity to what performers go through when they have to take off their clothes. I try to be very sensitive to that, and work hard to create an environment where they feel safe and not exploited.

Olnek: It’s unknowable, it’s not like I can compare it to my other career as a male filmmaker. It’s also hard to compare what it would be like to be a female director of dramas versus what I am. If women aren’t taken seriously in this society, imagine being a director of screwball comedies. That’s just gilding the lily.

Olnek: That’s easy, The 40 Year-Old Virgin – when I saw that movie, I had to go walking the streets afterwards until the wee hours of the morning. It was so painful to think that something so funny had been made in the same world that I live in, yet I didn’t even have a chance to be a part of it. My friend Deb Margolin, who is a performer in my films and a professor at Yale, saw the film separately from me but had the exact same reaction.

Olnek: I have two very, very interesting projects that anyone who wants to invest in will hear the plot summaries of. One will start shooting shortly.

Olnek: The Sundance festival is a very special place where a million things can happen – of course, everyone dreams of that opportunity (a big picture deal, or signing with an agent) that changes their life – but the most important thing may be the ties you find with other filmmakers, and how much you learn from them. Joe Swanberg was telling me how much he was looking forward to hanging out at Sundance, and when I first met him at the Maryland Film Festival years ago, and he had made his first feature, he was the person who convinced me that low-budget feature-length films could be made.

Olnek: Is there a way to see this film if we don’t go to Sundance? And what about seeing your other work?

If you click the GoWatchIt tab on The Foxy Merkins website or Facebook page, it will send you a personalized email at a later date according to where you live to let you know when the film is playing near you.

My award-winning comedy shorts Countertransference and Hold Up are viewable for free online, and my first feature, Codependent Lesbian Space Alien Seeks Same, was released by the fabulous team of Chris Horton, Joseph Beyer and Missy Lanely at Sundance Artist Services and can also be seen on iTunes, Amazon, etc. And the DVD of Codependent is available at amazon.com, they can send it wrapped and it makes the perfect gift for the lesbian or wannabe lesbian in your life, male or female.