“I Wanted to Live in That World From Morning to Evening”: Fyodor Bondarchuk on Stalingrad 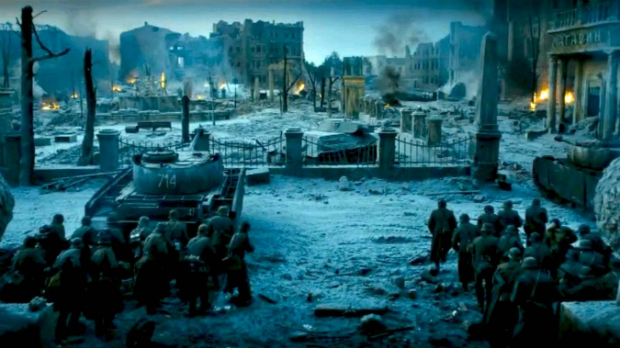 by Vadim Rizov
in Directors, Filmmaking, Interviews
on Feb 27, 2014

Fyodor Bondarchuk’s father Sergei made the 1967 War And Peace, a famously profligate Soviet production with thousands of army soldiers as extras and the biggest budget in the USSR’s history. His son came up through music videos and advertisements, making a splash with 2005’s Afghan War drama The 9th Company.

The lavish Stalingrad was shot in two parts, as much as possible in 3D; if nothing else, it’ll go down in a sub-section of film history as Russia’s first IMAX film. It’s a tremendously odd film, the kind of overtly nationalistic take on the WWII battle you’d expect from an unapologetic Putin supporter. Aesthetically modeled in part on 300, Stalingrad alternates sentimental interludes of soldiers bonding with straight-up bloodlust, as Russian soldiers scream in slow-motion while unleashing automatic gunfire and other violence in defense of the homeland; in one scene, a soldier runs through a ruined building with his knife, with the speed ramped up and slowed down to savor each time the blade makes contact with a soldier.

Politics were set aside for this brief interview, which focused on the tremendous challenges of making the first Russian film since the USSR’s collapse to be the box office champion of the year. From constructing enormous sets and wrangling hundreds of extras through them to shooting winter scenes in summer heat, no part of making Stalingrad was easy. 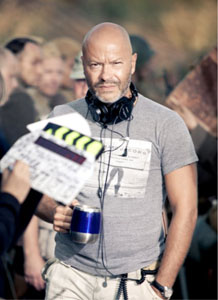 Filmmaker: How much did you know about 3D before you started shooting?

Bondarchuk: I know everything about 3D and about stereo rigs, about how to convert a picture from 2D to 3D, but it was only theoretical. At the beginning of my career, I worked in music videos and advertisements, and I cut very fast. I had a special language of montage. I wanted to shoot Stalingrad in 100 percent stereo, no post-conversion. I understood that there were different rules for cutting, and at first no one believed in my idea of shooting a war drama in 3D.

At first I had to do tests. That is, I didn’t have to, but I wanted to do the tests to explain to my producers, the production designer and the camera operator what I had in mind. Over the course of two weeks, we did tests that resulted in one sequence that went on 15 minutes. When we did the color correction and stereo depth and I showed it on the screen — this was part of the screenplay — everyone understood what I had in mind. I won them over.

After that began a very, very complicated and long preparation period, because on the third day, when they brought in all the technical equipment for Stalingrad — all done by the American company 3ality, run by Steve Schklair, who’s an outstanding expert on stereo. When they arrived, I understood on the third day that we would never in our lives film this picture, because we didn’t have the budget or the time and so on. But eventually I forgot that I was on a set surrounded by 3D rigs.

And at that same time, IMAX showed up. We didn’t shoot in IMAX. I had a stereographer, Matthew Blute, who made a cut-out from black paper to simulate an auditorium’s IMAX screen. I had a big video monitor, and every time we shot a scene that seemed correct, he said, “Fyodor look, this is the auditorium of a 2D theater.” Then he showed me the cut-out of an IMAX screen, and the difference in the size of the screens, the depth and so on, there’s an enormous number of details. Not only the vertical depth changes, but the horizontal framing, there shouldn’t be certain parts of the body or parts of the interior set in the composition, because in reframing your eye could get stuck on this left or right part. There’s a million such rules. But along with these minuses and complexities that come with 3D shooting, there’s an enormous number of plusses and absolutely new territory. Those were the reasons for which you might say I shot this kind of historical war drama in stereo.

Filmmaker: What about the process of preparing theaters for 3D projection?

Bondarchuck: It was a process that went parallel with Russia converting to digital projection. Not very long ago we lived without movie theaters. In 2005 when we made my first film, The Ninth Squadron, we had 300 screens, but Stalingrad went out on 3,000 screens. Before 2005 we had practically something like 50 screens. Everyone involved in film production in Russia is involved with digitization in one way or another. We didn’t do a celluloid release, only digital.

Filmmaker: How many American technical advisors were necessary for shooting?

Bondarchuck: The whole stereo department was American. At least 15 people came to deal with everything technical, but how many Americans worked on the conversion to IMAX in Los Angeles I don’t even know. It was a whole division, a lot of people. The first tests the IMAX people sent me, I was blown away but I had questions about specific details: black and white, light and dark, depth of field and so on. I came to Los Angeles for one day and they did several tests, and once we all understood we were on the same page they completed the rest of the conversion themselves.

I didn’t want it to look aggressive and have things flying at the audience. When I saw it yesterday in Manhattan in IMAX, I’d never seen anything like it. Maybe in a few theaters in Russia, but I saw outstanding picture and sound. All those months and years of preparatory work — this is regular, not state-of-the-art, not a laboratory screening, not a test screening, but it looked amazing.

Filmmaker: I understand you shot day for night to make shooting logistics easier.

Bondarchuk: I just don’t like shooting at night. I don’t like pictures where there isn’t a lot of visual information, where there’s just black as black. I want visual information. In Russian cinematography, this kind of day-for-night shooting is called “American night.” This wasn’t because we didn’t have time to shoot at night because it was summer and the nights are short. It was a starting decision. Furthermore, after we shot it there was an enormous post-production process: we changed the sky, shadows and so on.

Filmmaker: What role did you take in constructing the buildings for 3D depth?

Bondarchuk: All the important crew members understood that in each frame I needed three frames of depth: front, center and back. In the front, the production design crew understood this was their concern, and they put trees or statues or pieces of the architecture. In the background, the production design and CGI added on more details. In the middle, the makeup men were concerned with the artists. So responsibilities were divided among the crew along these lines.

In reality, the most important factor was that I watched the playbacks in 3D glasses, so I saw the 3D image on the monitor right away. Imagine, 12 hours a day in glasses, but those 12 hours I didn’t get tired of 3D at all. I wanted to live in that world from morning to evening.