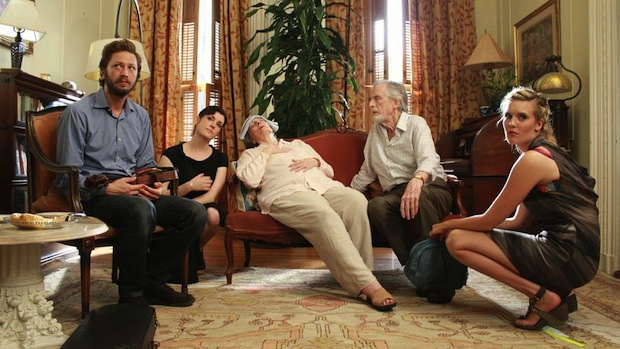 Following “The Women of Sundance” article in our print and online additions, Danielle Lurie continues her coverage of female filmmakers with a series of pieces highlighting women directors at SXSW. In this email interview, she talks with the editor of the Narrative Spotlight film, We’ll Never Have Paris, Mollie Goldstein.

Goldstein: The first question for me when considering a project is always the script, and this one was fun, funny, and had a screwball quality to it that I was really drawn to. Secondly, I really connected to Jocelyn and Simon at our first meeting. They were already shooting when I met them, and so we had a rushed interview on their lunch break while designers were interrupting with questions and the nanny was coming by so Joss could feed the baby — but even so, it was a great conversation. I was totally sold on the project after I brought up a criticism of the script and they both heard it without any hint of defensiveness and had really smart, thought-out reasons for how to make that scene work.

Goldstein: Jocelyn and Simon are both actors (Simon is the star of the film, obviously, but Joss, even though she’s not in the movie, is a terrific actress in her own right). And I never would have thought of this, but it turns out having two actors in the cutting room is incredibly convenient: you get ADR on demand! All I needed was a USB mic. And it wasn’t just Simon’s lines that we could redo — you should have seen of the impressions that went on! Simon ADR’ed not only himself but also Jason Ritter, Zachary Quinto and, most memorably, Alfred Molina. Jocelyn did a perfect Melanie Lynskey. We had multiple test screenings with their voices still in there and no one noticed! I think one of the Simon-as-Jason lines is even still in the film.

Goldstein: With editors the gender issues can be very subtle, and obviously I have nothing to compare it to as I’ve always been a female editor. But I think being a woman both helps and hurts — I’ve certainly been in situations where people have told me they think a “female sensibility” is a better fit for the film, and I’ve also been in rooms where I felt uncomfortably outside a “boys’ club” atmosphere. I do think men and women frequently have different styles of communicating, however, and I think my style has both helped and hurt me. I’m pretty low-key, and that means I’m good at helping directors who might be intimidated or threatened by a more aggressive approach. It also means that I can get railroaded, though, and I’m not very good at promoting myself. I’ve seen male editors and d.p.’s rise very quickly, and I think it’s both due to talent (of course) and also the ease with which many men can network and self-promote.

Goldstein: I think so much of it has to do with the process of financing films. I thought the Google hiring data that came out recently was so interesting — basically, they found that the reasons they were hiring fewer women included 1) women weren’t stressing their accomplishments and so the interviewers would frequently miss them, and 2) if you advertise a job with a list of qualifications, women won’t even apply unless they meet all of them. Men are much more likely to apply if they meet some of the bullet points and then assume they can figure out the rest. I think this is so applicable to women in film — in order to get a movie financed, you have to relentlessly advocate for yourself and be totally sure that you can meet all the challenges of directing a feature. I think it’s hard for women to do this, and the marketplace is not set up to draw out the talents of quieter individuals. Challenging funders and companies to pay more attention to women, and helping women find mentors who can coach them to assert themselves more directly, could both help here. I personally have benefitted from some great mentors, both male and female, who have helped me realize what I’m worth and how to go about achieving it.

Filmmaker: Of the big blockbuster movies out there, which do you wish you had edited?

Goldstein: I wish I had edited Her! It’s a wonderful movie, and it also seems like there was just so much “meat” for the editors — so many fresh challenges and such a variety of options and constraints.

Goldstein: Unclear! I’m interviewing for things and waiting to see what comes up. (As an editor you’re always at the mercy of fate). I work a lot for the Criterion Collection, editing supplements and trailers, and so I’m happily picking apart incredible movies while I wait for the next feature to appear.

Goldstein: I love going to film festivals because it’s like living in a little bubble where the only thing that matters is seeing great movies and meeting great people. My dream person to meet here is definitely Lena Dunham — she is my hero and working for her is my dream job.