5 Things I Learned about the Panasonic GH4 at NAB 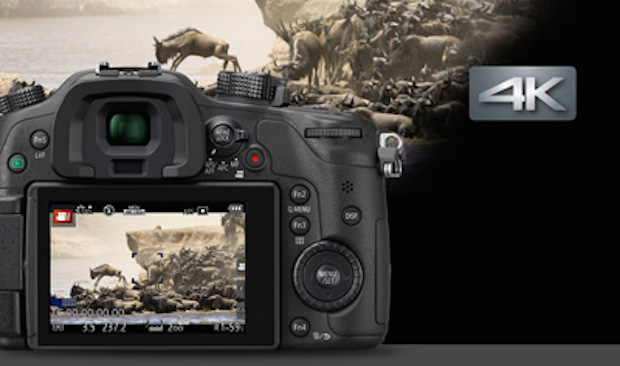 by Joey Daoud
in Cinematography, Filmmaking
on Apr 21, 2014

I have been a big fan of Panasonic’s GH line since the GH2. When the GH3 was announced I was first in the cyber line for pre-orders and same deal when the GH4 went up. This time I opted to get the YAGH Interface Unit package. My thought process was I’d have a “real camera” setup that can handle XLR audio (I hate dealing with a second recorder and syncing audio), I could jam-sync the timecode on multicam shoots, and then I’d be set up to just rent a 4K recorder for high-end jobs that needed 10-bit 422 recording.

I finally got a chance to actually play with the camera and interface unit and get a rundown from Panasonic’s Matt Frazer. I learned a few new things I didn’t know before — some good and some bad.

Ok, I’ll start with the big one for me instead of saving it for last. Maybe some of you knew this or are thinking, “Well duh,” but I was under the impression that at least some of the features of the unit could run off the camera’s power, like the XLR audio (I did know that the unit doesn’t have its own battery slot) and that the 4-pin XLR input was just an extra option for power. Not the case: the unit won’t work without DC input.

When I asked Frazer about this he said their thought process was people buying the interface unit would be doing a large build out on a rig and would have an external power source for the recorder anyways. I can see the reasoning in that, I just didn’t realize the unit was built so specifically for a certain type of user. I’m primarily a DSLR shooter so I don’t have an Anton-Bauer setup. And there goes the whole portability of the unit if I just wanted to mic someone and follow them around— now I need to lug giant batteries and chargers around to shoots.

In my defense, I have never seen a picture of the unit plugged into an external source. So in all those marketing photos they’re using it for what? Additional grip? Also in the description of the unit on B&H’s site, it just says, “For power, a 4-pin XLR 12VDC input is available.” “Available” is a far cry from “required.”

Well, now you know — in order to use the YAGH unit you need a power source.

2) Not RAW but Cinelike

Now for some good — Panasonic doesn’t exactly have a RAW format, but they do have Cinelike D and V gamma that lets you record with a wider latitude. Kind of like RAW.

If you’ve ever tried to setup the Wi-Fi syncing on the GH3 you’ve no doubt run into the pain of typing in the totally random security code. Syncing with the GH4 is a lot easier, using either a QR code you scan with your device or NFC. I’m curious if anything else will take advantage of the NFC chip in the future.

4) The Mystery of the Front Two Holes 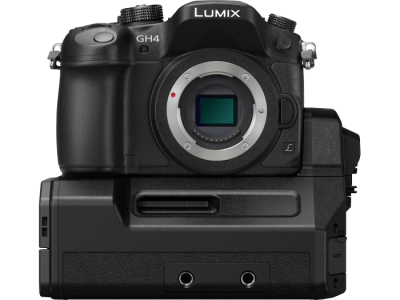 Ever since the first images of the GH4 and interface unit made its way online, there was a lot of speculation on what the front two holes were for. Well the theories about a rail system are correct, but Panasonic isn’t developing anything themselves for them. They just put them there for third parties to work with. One idea is a rail support that snaps into the two holes and adds standard 15mm rails for the usual accessories. The other is a mounting point for lens support.

However this just adds to the mystery of what their intended setup of the unit is. There’s no mounting point for rails in the rear of the unit and that would be a good area to put some rails for the required battery to power the device. So if you have this on a rig, with rails, why would you need more rails on the front? That’s like a good portable solution — throw some small rails in your bag to add a follow focus — but clearly the build out of this unit is not meant to be portable.

One of Atomos’ big announcements was the Shogun, a $1995 4K recorder (and the only new 4K recorder I noticed) that can record 4K from HDMI or 12G SDI. So basically it can record the 10-bit 422 signal direct from the GH4, but not from the interface unit. All from a device that is exactly the same price as the interface unit. Plus you get a calibrated 7” monitor. And options for XLR audio. Makes the YAGH seem less and less appealing.

My time at NAB was definitely an eye-opener for the GH4, or more the YAGH. The camera itself still looks amazing, the interface unit is just a bit perplexing and I’m strongly leaning towards just going with the camera body only and waiting for the Shogun to come out – or the inevitable future HDMI 4K recorders. It’s just annoying that so much data is dependent on the worst type of cable connection possible.