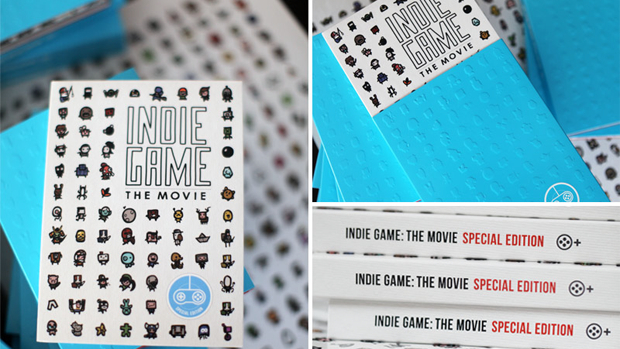 by Lisanne Pajot
in Distribution, Filmmaking
on Jun 19, 2014

VHX is an internet distribution platform built for premium video that empowers artists to sell their work from their own websites. The company has enlisted Lisanne Pajot, co-director of Indie Game: The Movie, as their first Filmmaker Ambassador, providing guidance and tips for filmmakers for selling their films online directly to audiences. In the following post, Lisanne discusses the importance of deluxe editions.

As a VHX Filmmaker Ambassador, I talk to creators everyday. I am often asked: “What should I use as a teaser?” “How many minutes of extras should I include?” “What kind of content should be in my Deluxe Edition?”  Here’s a bit about releasing bonus material including teasers, extras, and deluxe editions, based on my experiences with Indie Game: The Movie.

With VHX, you’re in charge of your film’s release, and the possibilities for what that includes are endless. Beyond your main feature or series, think about connecting your audience with deleted scenes, commentaries, extended clips, and more. You can even get started before your project is finished.

In deciding what, when and how (free or paid) to release bonus content, I encourage you to think like a fan (a philosophy we talked about in our Indie Game: The Movie Case Study). What would a fan want to see throughout the stages of your project and after the credits roll? How can they experience your film in deeper way based on the content you surround it with? What are the extras that might appeal to fans but also, what is custom to the spirit and voice of your film?

• Teasers –  Free videos released before your film launch. For free teasers, if you were interested in this subject or world of this film, what sort of videos would make you into a fan? What sort of videos would you want to share with your friends? Here’s a teaser short, another teaser short, and a buzz-building extra from my project, Indie Game: The Movie. These were all released prior to the feature film’s release.

• Deluxe Editions – Extras bundled with your film.  This is paid content. If you were already a fan of this project, what would you be eager to see more of and want to know more about? Here’s our example of a Deluxe Edition.

• Extras – Extra content sold separately on release. We saw success in offering both Deluxe Edition bundles and Extras, sold separately. We made the Special Features from the bundle available as a separate purchase for those that saw the film elsewhere — Netflix, television or even torrents — which provided a way for us to connect with those fans even though they weren’t coming to buy the film itself.

For Pre-Production: Ideally, you want to start thinking about additional content while you are making your film or series. When making Indie Game: The Movie, my producing partner James and I were doing a kind of ‘content triage‘ on the fly:

• During production, we were constantly thinking about what stories would be in the feature, and what would make a great “teaser” shorts for fans. We ended up making & releasing 88 minutes of short content online in the year it took to make the feature. Through this content release strategy, we were able to keep our Kickstarter backers engaged, grow our audience (from zero to 30k by the premiere at Sundance!) and build a network of links to our website.

• In editing, we examined what stories fit into the film’s narrative and what ones would be great stand-alone extras.

• In preparation for our digital launch, we identified scenes and shorts we could be released to help build more anticipation.

• On tour with the film, we sought out other story and content opportunities as well. We had long Q&As filmed at conferences and festivals. We shot epilogues on the road with the subjects of the film.

• After the feature was released, we looked at the shorts that we had already shot, our existing subjects’ ongoing storylines, and potential future subjects. We decided to shoot more, edit more, and make an extra special offering, a digital Special Edition with 100 mins of all-new stories released close to the one-year anniversary of the film’s release.

For Post-Production or Completed Projects: Look at what content you have right now and what opportunities you have to create more content in the near future.

Here are some ideas for what to include:

• A “Behind the Scenes” documentary about the making of the film or series
• “Behind the Scenes” videos on various aspects of production
• Interviews with the creators
• A festival Q&A with the director & cast (ideally with good audio, filmed multi-camera & cut together)
• Director’s Commentary
• Commentary by the subjects of the film, the actors, other people on the creative team or thought leaders associated with the subject of  the film
• Deleted Scenes
• Uncut (or lightly-cut) interviews
• Epilogues (what happened to the characters after)
• New or previously-produced Short films

Generally, more is more with Deluxe Editions. The more you can add, the more compelling the offer is for fans.

With documentaries, there are many opportunities to gather additional content, at any point in the process. For narrative films, you’ll need to work a little harder, focusing efforts on “making of” content, or if you have the time and budget, shooting additional storylines for short films. But is it worth it? Is it really worth the time putting together extra stuff after you poured yourself into the making of the film or series? Offering digital extras and Deluxe Editions both heightens your project’s exposure, and creates the opportunity for increased revenue. You’re able to offer fans another product, at another price point, with more of what they want, more of your work.  The below projects built bonus content into their distribution plans via VHX, and saw a great response from fans — check out their examples of Deluxe Editions:

We’ve seen from these examples, customers pay more when there’s more to buy. VHX has seen that when deluxe and standard editions are released together, 80% of those titles sell more deluxe editions than standard editions. On average, 60% of total sales among this group come from deluxe packages. Beyond revenue, bonus content is an excellent way to build a relationship with your audience. You’re creating more access points to what you’ve made, providing them more reasons to revisit your work. That means more opportunity to build your audience for this film, and your future films — that’s a long-term investment.

For more from Lisanne and to stay up to date with the latest VHX news, you can follow the VHX blog: http://blog.vhx.tv/