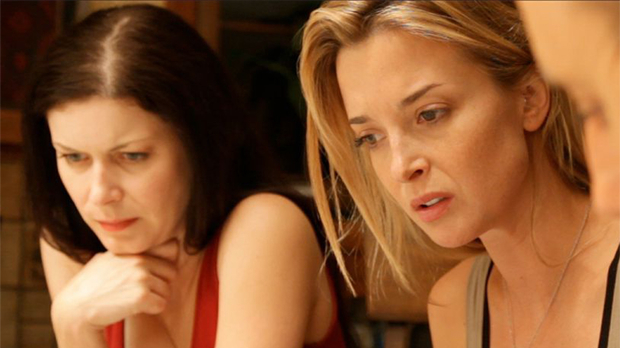 Eight friends gather for a dinner party. They interrupt each other with trivial anecdotes and laugh ceaselessly while refilling their wine glasses, their would-be long-established intimacy coming off as desperate collusion to pretend all concerned are having a grand time even though anxiety is the dominant undertone. Coherence first plays like an especially annoying slice of Los Angeles life about glossy, well-groomed people getting on each other’s nerves, both in relation to their romantic partners and in a sexually neutral-ish social context — i.e., it looks like jobbing but lesser-known professional actors (mostly) pretending, not all that successfully, that they’re not part of the entertainment industry.

Coherence‘s opening feint is to present itself as a movie about People; annoying people, to be sure, but ones with tangled relationships, improv’ing their way through one potential conflict after another. Then the power goes out and there’s a thump at the door. Coherence briefly flirts with becoming a horror movie: with the lights out and the possibility of another bang, the possibility of shock-cut mayhem and rampaging boogeymen is strong every time someone stands in front of a window or door, and all characters are potential lambs to the slaughter. The camerawork is sometimes composed but more often functional, and because it’s established early that this will be a) basically a one-set movie b) use the claustrophobia of that one set to increase the potential menace from outside c) the actor-y feeling is strong, the vibe is very Baghead.

It’s basically impossible to write about Coherence without alluding to its eventual hook, so stop reading if you don’t want to know anything. The basic idea is the same as time travel — each passage through a dark zone in the middle of the street creates another set of alternate universes — but here all the clones created co-exist in the same space at the same time, which has meant a lot of Primer comparisons. Though not as clever or formally adept, Coherence is very clever at parceling out a new detail or complication every ten minutes, all of which are dizzyingly well thought-out. Keeping up minute to minute is a near-impossibility, but the gist eventually catches up to you.

Director and nominal “writer” (the film was improv’d over five nights; “story by” would be more accurate) James Ward Byrkit drops in unnerving sudden fades to black, charging rote preliminary pleasantries. I got actual chills later on, at key moments of revelation, as “This Person Is Not Who I Thought They Were” becomes very literal. That this realization also serves as a metaphor for relationships is predictable and literal-minded, but Coherence resolves itself as more of a sick joke than a mopey drama about Relationships In LA. Here’s the puzzle film at its purest: momentarily scintillating enough to bypass the banality of its players, a scenario whose adroit unfolding trumps the emotions it supposedly illuminates.