Why We Are Giving Our Feature Away for Free at LYLEmovie.com 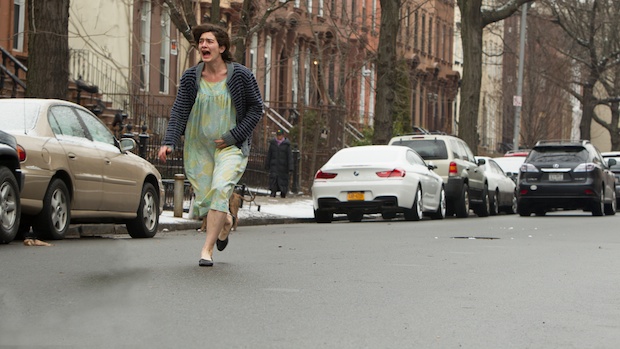 by Stewart Thorndike and Alex Scharfman
in Distribution, Filmmaking
on Aug 4, 2014

Lyle is the “sharp and moody” story of Leah (Gaby Hoffmann), whose grief over the death of her toddler turns to paranoia when she begins to suspect her eccentric neighbors are involved in a satanic pact. It is an updated, lesbian take on Rosemary’s Baby and is available for FREE at LYLEmovie.com.

Two years ago, Stewart decided to stop making films. She had just spent the last six years of her life obsessively trying to make her first feature — a mother-daughter real-estate thriller — and it all fell apart in a month. We were excited about the script that she’d worked on for years and had a dream cast and crew that was on board to make it. We thought we were ready to go. But the money we thought we had wasn’t real.

So she raised her fist to the world, stomped around and said forget it. After a good bit of sulking, Stewart looked at her partner at the time, Ingrid Jungermann, co-star of Lyle and creator of F to 7th and The Slope, two acclaimed webseries. Stew watched her pull off episode after episode, over which she had complete creative control, and thought, “why don’t I do that?”

And so Lyle was born out of a need to not ask for permission, out of an urge to just make something. Stewart wrote an unusual, feature-like horror webseries and, with the small amount of money that we had available, we made Lyle. In postproduction, the series became a feature, pickup shoots were added, and Lyle took on a life of its own.

We premiered Lyle at OutFest in Los Angeles, where Gaby Hoffmann won a Special Jury Award for Best Actress for her performance and where we received positive reviews and interest from distributors, most of whom were struck by our plan to give Lyle away. We wanted to stick with the idea that got us to Lyle: the desire to control our film’s destiny and not wait for permission.

It is in that spirit that we’re giving Lyle away for free at LYLEmovie.com. Sure, we could send the film out on the festival circuit and hope for a more traditional distribution offer, but that would take months or even years. We know that there’s an audience out there for female-focused genre films like ours, even if the message from the establishment is that there is not. We know that there are people who want to see genre stories told from a female perspective by a female director, even though there are too few. And we hope there is an audience for Stewart’s unique tone and storytelling style. By giving Lyle away, we’re inviting that audience to come find us and help us make more movies for them.

The music industry, whose models seem to be a few years ahead of film, has already seen artists like Radiohead make their work available in exchange for whatever a fan wants to give. In the comedy world, Louis CK had enormous success when offering a pay-what-you-want (with a $5 minimum) deal on his standup special in 2011. In our case, we’re inviting Lyle’s viewers to donate what they want to our next film, Putney. Through this model, we hope to disrupt the traditional financing and distribution paradigms by tying the distribution of one project to the financing of another, democratizing both to create an audience and a brand on which we will build with Putney.

With Putney, we do plan to seek additional financing and support through traditional industry channels, but hope to do so with an audience of willing contributors at our back and on our side. We hope you’ll be there with us. So we ask you to watch Lyle at LYLEmovie.com and, if you like it, to please donate what you want to Putney’s Kickstarter. We hope you’ll help us in this movie making experiment and speak out for content that you like by making a donation or sharing Lyle.

Stewart Thorndyke is the writer/director and Alex Scharfman is the producer of Lyle.