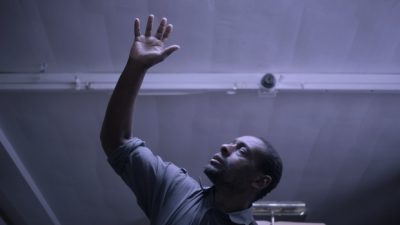 by Jake Mahaffy
in Directing, Filmmaking, Production
on Sep 16, 2014

“How could a man crush a child for over two hours, the entire time believing that he was helping him?”

That was a question that formed in my mind as I read mainstream news stories back in 2003 of a failed faith healing. But as time went on, I did more research. I met with the actual man and his church, coroners, specialists, lawyers, the deceased child’s relations: I discovered that there were other factors involved. This new personal knowledge and my increasing awareness of the complexity of that disturbing situation inspired me to keep pushing the film for over ten years.

Free in Deed was finally shot in Memphis, Tennessee in February 2014. Two daring and committed actors, David Harewood (Homeland) and Edwina Findley (The Wire), took the lead roles, everything else was made with locals and non-actors. We discovered a lot of talent in town. The way Memphis supported this project was incredible. We weren’t bringing in money, and it must have been a tough call on the complex and risky content, but most everyone we met was moved by the story and wanted to get involved.

Now, I’m editing the film and trying to get it done for screenings in 2015. The producers, Mike Ryan and Mike Bowes, running the crowdfunding for post-production, asked me to write something about these past ten years. Film-wise, while waiting for the right people to get involved in Free in Deed, I finished two other feature-length films and a dozen shorts, learning a lot in the process.

So, I wrote down a handful of things I learned (but find it tough to practice) and might be helpful to somebody else too. These are just opinions. Please enjoy.

Filmmaking is about progressively failing less. I’ve never gotten it exactly right. Each time I get close to nailing it, the variables change. This doesn’t mean playing it safe and harmless for fear of failure. Aiming far and hitting beyond your planned target can send you on to greater things. Reaching beyond your grasp might leave you with an empty hand but the ambitious act itself might transform your life; I think that’s a risk worth taking. I love all kinds of cinema, but the kind I’m interested in making is the one that doesn’t feel like a “movie.” It’s dangerous, like it could fly off the rails at any moment, the film might go places beyond my expectation or comprehension. But in order for this kind of uncontrived energy to translate into a finished film, the filmmakers themselves must submit to an unplanned process of discovery of the material. So, the film becomes a recorded realization of their working process, driving towards the drama as it is forced to reveal itself (a far cry from methodically illustrating a preconceived plan). This is a kind of mind-trick where I fool myself with a screenplay, massive preparation, and heartfelt intention in order to make a film other than I’m actually capable of conceiving. So, because filmmaking (for me) is about this discovery, the process requires imbedded unknowns. And since every single element, aspect and variable isn’t logged, charted and accounted for beforehand, these unknowns could either wreck a movie or make it worthwhile.

Subtraction is a powerful act. This is mainly recognizing limitations and handling frustration creatively. As a micro-budget filmmaker, I couldn’t create a medieval period piece with castles and crowds of peasants. But I can leave all the advertising just out of frame, remove the logos and Land Rovers, and stick a man in a burlap sack in the woods. And that movie will be whatever I say it is. A world can be created by removing things from a frame, not just adding them. What isn’t shown is as relevant as what is shown. This goes back to all the tricks we know: going wide to avoid close-ups on bad practical fx, shallow focus to blur out any eye-balling extras, placing the camera behind a poor performance instead of showing it full frontal, etc. Like Chinese landscape painting: epic mountainous geography represented through the lightest touch of ink on silk. Vast swathes of “empty” unpainted space with bare bits of the periphery depicted by abstract gesture. Only the boundaries of the landscape are defined and the viewer’s mind forces the intervening emptiness into meaning. A viewer can’t help but perceive this blank space as actual form. Besides framing for visual narrative, it’s a powerful lesson for over-developed plot to my mind: just a few solid and worthy narrative threads will hold together a whole world of unanchored experience. Cinema is inherently literal so it doesn’t have to describe itself on screen: exposition on what is happening, why, who, what, where. The challenge is in allowing mystery to exist in the ellipses. I think an engaged viewer needs indication, not exposition.

Narrative is what the viewer does. Maybe film isn’t “story-telling” but “event-making.” Like experiencing a dream, I want to feel subjected to the process, as a conduit rather than a controller. Storytelling feels too paternalistic, possibly manipulative, for my interest as a maker (although I love to watch a good yarn). This isn’t about ceding responsibility for film structure and content but it just comes down to an individual’s personal preferences in the balance between explicit and inferred narrative. I watch students desperately trying to make “stuff happen” in their projects. Their real interest in filmmaking is “theme” but they get caught up in creating the vehicle for dramatization, becoming confused by the machinations of plot structure and characterization, losing sight of any personal reason to bother making a film in the first place. So, I suggest to them to forget about “plot” at first and simply make sure that in each shot or scene “something changes and/or something is revealed”: two basic elements of film narrative. A woman stands alone in the woods. She holds a bloody hammer in her hand. That’s a reveal. A woman stands in the woods holding a bloody hammer. A child walks by and the woman quietly follows. That’s a change. Both of these “scenes” reveal character and behavior and both “scenes” are asking questions, not just telling stories. This is the basis of visual narrative: something found in every frame of the best photojournalism. It reminds me that, regardless of endless emotions or explosions, without a change or reveal, there is no development, no narrative, no structure, no real meaning to a movie. This is one difference between a collection of footage and an actual film.

Money always costs something. Scaling up comes at a cost. There is no free money. I don’t just mean that we will owe somebody for a loan or investment, or that we’ll have to sign away our project for the cash to make it. But the money that affords a bigger camera brings a slower set-up (for every shot, every day); more money brings more oversight on your process; more money might mean a larger crew but, based on availabilities, also cramming the shoot into a shorter time frame. None of this is necessarily bad; but it’s best to anticipate it and adjust your expectations. And of course, the more money involved, the more consideration you might give to assuring that what you “say” in your film is only what you expect people would pay to hear. I’ve only made films so far by avoiding the production apparatus; the industry’s efficient, standardized model that was developed based on its own considerations of affordability, not mine. I would never expect to utilize that apparatus and just not pay a crew. So, I don’t even ask anyone except hobbyists and volunteers to get involved in my projects (with a few fortunate exceptions). In any case, over the past ten years I insisted on making films on my own, for what I could afford.

Every film is a result of intention and circumstance. No practice exists in an ideal realm of unadulterated abstraction. For me, committing to actuality (ie. a film) over potentialities (ie. an idea for a film) is a hard step. Any film that gets made is a version of the film it could have been. In the process of making a project some important things will get lost along the way: you can’t fit a certain shot into the schedule so an important character trait gets lost; you can’t get the right performance so a certain theme is dropped; the perfect location is unavailable so a narrative thread remains un-shot. This can be especially painful when, after shooting, you’re dealing with the left-overs of an unrealized and incomplete vision of what the film was meant to be. But at some point, I have to accept the footage for what it is and not what I meant. It is what it is. Whether on the shoot or in the edit, the mental facility to readjust one’s perspective on imagery that has been so deeply imbued with personal intentions and then to perceive it anew has been among the most useful skills for me to develop as a maker. In production, all the problems, frustrations, and obstacles that seem like distractions from the “film idea” are the “film itself” as you’re being forced to realize it. The weather on the day, the distracted actor, the banal challenges of focus-pulling: these things are the film as it exists, not in the mind but as it exists in the world. It may also be the unplanned brilliance of a character’s expression; a shot that doesn’t follow action but holds for perfect frame; a magic splice that sparks new associations: things that exist in the world that you could not anticipate in your imagination. By turning a film into a reality and sacrificing the potential it holds as an idea only, we might realize something actual, an immutable shared experience that can’t be revoked or forgotten.