Editing Today: Beyond the NLE 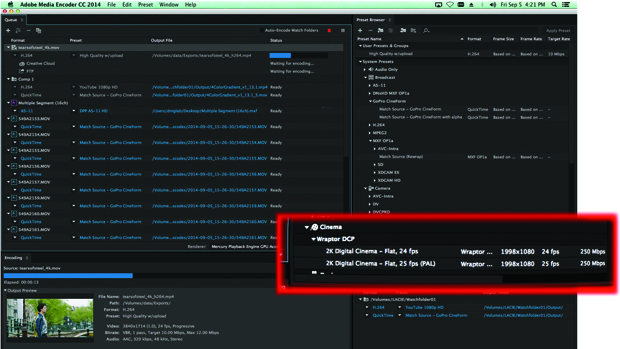 David Lean once called editing the soul of filmmaking. Today it’s more like the Mission Control.

To ensure a smooth and efficient postproduction “workflow” (term borrowed from I.T.), you must know about cameras too: which frame sizes they capture, which codecs they employ, which gammas they apply, which file wrappers they add. Speaking of I.T., you must know how much disk storage you’ll need for both media and render files, how blazingly fast your drives must be (RAID 0 anyone?), and how fat the pipes must be — FireWire 800, USB 3.0, eSATA, Thunderbolt 1 & 2, in order of faster throughput.

As you ingest camera footage, you must decide how to organize it for the edit and beyond. Will it be backed up? How much will be archived? To optical discs, hard drives, linear tape, the cloud? How will you keep track of everything during post? How will someone in the future figure out what’s what, and where?

This is one reason Apple attempted to rethink, distill and streamline NLE functionality when they introduced 64-bit FCP X three years ago, to howls of indignation. True, early FCP X was undercooked and lacked basics like EDL, OMF, multicam and FCP 7 compatibility, but I think the underlying complaint of many FCP X naysayers was, and remains, rooted in the significant investment in time and experience needed to master a modern NLE, no less adopt a radically new paradigm. Most FCP editors simply wanted a faster, brawnier version of what they already knew.

Since its debut in June 2011, FCP X has undergone 13 free updates, averaging one every three months, distributed online by Apple’s App Store. Multicam, broadcast monitoring, XML and 4K support are now old news. With the arrival this year of the cylindrical dual-GPU Mac Pro, for which FCP X is expressly tailored and vice versa, it’s clear Apple remains serious about pro video. In fact, at NAB they boasted over a million paid seats for FCP X, more than the previously installed base for FCP 7. Yet, three years on, a significant number of editors cling to no-longer-supported FCP 7.

You can do these things when you engineer both software and hardware. Take app amalgamation. With FCP X’s introduction, gone were Color, Soundtrack Pro, and DVD Studio Pro. Their key features were absorbed into FCP X. (Or discarded. No way to set region codes or tailor splash screens when burning DVDs directly from FCP X.) In my view this represents progress, as I dislike exporting and importing clips between apps, i.e., external “round-tripping.” Why can’t a single editing app do everything related to editing and finishing? In fact, one of the recurring complaints about FCP X is that there is no way to send a project or clip to Motion from within FCP X, or open a Motion project in an FCP X storyline in order to update an effect.

To be fair to FCP X, motion-effects plug-ins already exist inside FCP X due to FxPlug 3 architecture, which exploits the power of OS X’s Core Image along with GPU optimization. FxPlug 3 enables motion, transition, “generator” — grids, color bars, t.c. burn-ins — and title effects authored in Motion 5 to be published as plug-ins, then imported into FCP X for direct use on the storyline. A youthful Internet community of FCP X users creates and freely swaps collections of these FxPlug 3 effects, which a little bit of Googling will uncover.

CC, of course, denotes Adobe’s Creative Cloud services, to which, in 2012, Adobe moved most of its creative apps including video. Unlike FCP X’s App Store updates, which are free, access to Creative Cloud apps and their updates requires a monthly or yearly subscription, meaning that, like FCP X’s updates, you’re always using the very latest version of an app. To be clear, Adobe’s CC apps reside on your computer and you need only go online once a month for Adobe to verify your subscription.

CC contains at least 15 specialized apps, including Photoshop, Premiere Pro, After Effects, Audition, and SpeedGrade. The full slate, with 20GB of cloud storage thrown in, is $74.99/month or $599.88/year, which comes to $49.99/month if subscribed for a full year. There are also Single App subscriptions at $19.99/month with an annual contract. In other words, Adobe has pointedly not taken the path of amalgamating its NLE with other apps.

Of particular note is Adobe Media Encoder, a standalone answer to Apple’s Compressor available via Creative Cloud as a complement to Premiere Pro (not à la carte). Earlier this year Adobe announced the licensing of QuVIS Wraptor 3.1 (Mac, Windows) as a Media Encoder plug-in to enable do-it-yourself DCPs. Talk about sweetening the deal! What Creative Cloud doesn’t offer, however, is a DCP viewer to avoid renting an expensive theater with 2K projector to check your homebrew DCP. One answer is DCPPlayer 1.0, Mac-only software you can buy or rent directly from QuVIS. (A Mac version of Wraptor 3.1 is also available as an Apple Compressor plug-in.)

How is Creative Cloud doing? In June Adobe announced 2.3 million subscribers, with CC responsible for 53% of the company’s revenue. Of course with throngs of photographers signing up for Photoshop, it’s hard to break out the subset of those who are primarily video editors.

(Adobe CC apps are now happier on the cylindrical Mac Pro thanks to OS X update 10.9.4 and Premiere Pro/After Effects bug fixes earlier this year. Resolved was an issue caused possibly by DaVinci Resolve’s CUDA drivers installed in the new Mac Pro, which doesn’t use CUDA but rival OpenCL for its AMD GPUs.)

For those inclined to march to a different drummer, there now exist two unconventional but remarkably capable NLE contenders, as I described in Filmmaker a year ago in “Autodesk Smoke 2013 – Super NLE?“

As NLEs, Autodesk Smoke 2015 (Mac) and Blackmagic Design DaVinci Resolve 11.1 (Mac, Windows, Linux) reverse the example of FCP X absorbing apps like Color. These are post finishing/EFX and color grading giants that have instead absorbed full timeline editing and media management features. In other words, they’re sandboxes you don’t have to leave. While both provide broad support for exporting and importing of clips and project timelines to/from other apps, they are complete and insular ecosystems that make round-tripping seem primitive.

Smoke is renowned for sophisticated node-based compositing (shares DNA with siblings Flame and Inferno), just as DaVinci Resolve is renowned for its node-based color grading. Working with nodes is like working with layers in Photoshop: you non-destructively tweak the contents of a particular clip’s effects node without altering other effects nodes you’ve created, or color decisions you’ve made. Like FCP X and other 64-bit NLEs, renders occur silently in the background, causing effects to be available almost instantly.

As a comprehensive editing/finishing environment, Smoke brings extensive color grading tools, while DaVinci Resolve offers OpenFX plug-ins (an open-source standard usually found in Windows). Notably, at IBC in September, Blackmagic Design announced the acquisition of eyeon Fusion 7 (formerly Digital Fusion), a top node-based compositing program popular with high-end Hollywood visual effects houses. If Blackmagic’s democratization of DaVinci Resolve is any indication, a port of Fusion 7 to OS X awaits, then a vertiginous price drop that seeds Fusion “Lite” across the DIY desktop spectrum. What if, instead, DaVinci Resolve and Fusion merge into Blackmagic’s version of Smoke?

As it stands, Smoke 2015 and DaVinci Resolve 11.1, both node-based workflows crossed with full-fledged NLEs, impose significant learning curves. (You WILL study the manual. Frequently.) But you’ll find 50 new tutorial videos on Smoke’s YouTube channel to illustrate its user interface and capabilities, while Blackmagic Design’s website hosts detailed video overviews of editing and color grading with DaVinci Resolve 11.1. Not to mention those countless YouTube how-tos from fellow users.

Moreover, you can test-drive both NLEs for free. Smoke 2015, available by subscription only — monthly $185, quarterly $460, annually $1470 — offers a 30-day free trial. Educators as well as students are eligible for a free long-term license. Blackmagic Design tacks in a different direction, offering full DaVinci Resolve 11.1 (requires dongle) for $995 but DaVinci Resolve Lite 11.1, which delivers 95% of the full version, for free. This includes all formats up to UHD (3840 x 2160). What you sacrifice with the free version is 3D stereo, true 4K (4096 x 2160), advanced noise reduction, and the possibility of collaborative, long-distance editing.

Free versioning is an intriguing strategy. As in the case of DaVinci Resolve Lite, it can cause widespread adoption and de facto mainstreaming, which otherwise would not have occurred. Lightworks 12 has recently adopted a similar path, offering a Pro version by subscription for $24.99/month, $174.99/year, or $437.00 outright, but also a free version that virtually matches the full version. Its single limitation is 720p MPEG-4 output. Apple, of course, split the difference with FCP X, slashing the price of FCP X by two-thirds compared to FCP 7, to $299.99. All this NLE low-balling brings smiles to us little guys.

Speaking of collaborative, long-distance workflows, the latest selling point for NLEs is multi-editor timeline sharing based on mutual access to media “assets,” either on a local server or over the Internet. Apple’s bundled Library, by consolidating both project files and source media into one big container file — like a briefcase with a handle — facilitates non-simultaneous sharing (also simplifies later archiving). The same Library can be stored or moved between remote servers and SAN volumes or hand-carried by hard drive. Whatever the case, when opened on a Mac with FCP X installed, all resources needed to continue the edit are included.

Adobe, Avid, Blackmagic Design, and Lightworks define multi-editor sharing as real-time collaboration from a distance. Adobe calls theirs Adobe Anywhere; Avid calls their Avid Everywhere; Lightworks 12, Project Sharing; and DaVinci Resolve 11.1 (paid version only), Collaborative Team Work. As demonstrated by Blackmagic Design’s Grant Petty at NAB in April, DaVinci Resolve’s version of collaborative editing enables an editor and multiple colorists at far-flung workstations to simultaneously share the same timeline. As an editor cuts, a colorist might fine-tune already-locked sequences, while another might create power windows to track exposure issues across a tricky traveling shot. For assembly-line film and television post schedules where time is big money, this is pay dirt.

At present I’m archiving on 4TB bare hard drives with cloned back-ups. A reasonably priced LTO-6 drive with Thunderbolt might change my mind. So far there’s only one, mLOGIC mTape, $3,600, which debuted at NAB. Perhaps I’ll wait a year for LTO-7. Let’s hope by then the industry wakes up and offers us a choice of Thunderbolt LTO drives