On Golden Frog: The 22nd Camerimage International Film Festival of the Art of Cinematography 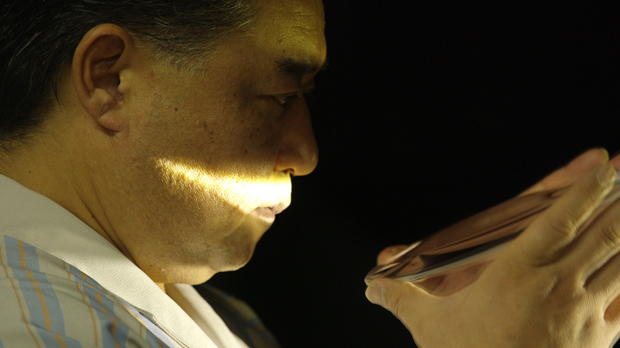 by Lauren Wissot
in Cinematography, Festivals & Events
on Dec 11, 2014

Located in the nearly unpronounceable Polish town of Bydgoszcz, Camerimage – the International Film Festival of the Art of Cinematography – is the must-attend event of the year for DPs, aspiring DPs, or any cinephile prizing visual craft over auteur theory. At this 22-year-old fest, folks like Caleb Deschanel (who received a Lifetime Achievement Award, a retrospective, and a massive hardcover book highlighting his career) and Vilmos Zsigmond are the stars, complete with their names in lights on the marquee of the massive Opera Nova, the festival’s headquarters and main venue on the scenic Brda River.

Far from passive honorees, most of Camerimage’s critically acclaimed attendees are refreshingly accessible: serving on juries and panels, teaching master classes, and showing up at the nightly parties (or rather late nightly, as the pre-drinking dinner buffets don’t even begin until half past ten). Indeed, Camerimage feels more summer camp than a Sundance-style market. Sure, there’s selling taking place, but that comes courtesy of the festival’s long list of sponsors. All the camera heavyweights – such as ARRI, Panavision and Canon, which also hosted seminars and workshops – ply their wares just outside the main screening room on the second floor, which transforms into a semicircular showroom steps away from the meeting area café.

Highlights for me this year included the post-Red Shoes panel for the Powell & Pressburger retrospective, which boasted none other than legendary editor Thelma Schoonmaker (who, sadly, was led by the moderator to stick to the subject of her late husband’s work in lieu of addressing an audience member’s query about Raging Bull) and producer Andrew Macdonald (Pressburger’s grandson – who wasn’t asked about former collaborator Danny Boyle). I also ventured out to Toruń, Camerimage’s original locale – before moving to Łódź and finally back to Toruń’s twin city of Bydgoszcz – for an exhibition of Bob Dylan’s truly striking paintings and drawings that the festival co-presented as an accompanying art event. (The other big exhibition was that of Polish Holocaust survivor and main competition juror Ryszard Horowitz at the Municipal Gallery in Bydgoszcz, conveniently located next to The One Club, the fest’s till-dawn party venue.) But mostly I avoided the commercial multikino and stuck close to the Opera Nova, shuttling between the main screening room and the much smaller one on the first floor – inexplicably reserved for docs, as if nonfiction needed to be relegated to its own separate cinematic box. (Not surprisingly, this was the venue that also had the most aisle spillover.)

Truth be told, Camerimage is less a festival of discovery than a heartfelt reminder of why we fall in love with movies in the first place. Of the 30-odd films I’d already seen or caught during the festival, I was more inspired by the selections in the eclectic retros than, say, the more buzzy main competition’s usual suspects. (Independent Spirit Award nominee Leviathan – Russia’s enthralling, Dostoevsky-bleak entry for Best Foreign Language Film – eventually picked up the top prize, the Golden Frog.) “Remembering the Masters: John Alcott” and “Remembering the Masters: Jerzy Lipman” each offered a chance to revisit cinematographic masterpieces like A Clockwork Orange and Knife in the Water the way they were meant to be seen. And regardless of how one feels about Hollywood’s cynical use of the 3D format solely to jack up ticket prices, Camerimage’s Special 3D Screenings of The Last Emperor and Stalingrad were, well, pretty damn cool (as is the very idea of including a 3D Films Competition as one of nine competition categories).

What most sets Camerimage apart from all the other European fests I’ve attended – aside from each industry attendee being assigned a truly enthusiastic and on the ball “festival guide” (thanks, Anna!) – is its focus on education. Sure, most festivals have a student competition, but Camerimage has that plus a Student Etudes Panorama, not to mention sections for the Best of Łódź Film School and Best of FH Dortmund (Germany). Indeed, this would account for the all the young, eager millennials not only filling seats but also packing presentations with forbidding titles like “Codex & CW Sonderoptic Seminar.” (No, I did not tackle that one.)

However, I did get to discuss craft a bit with Giora Bejach, who I met right at the end of the fest. Though the Israeli DP’s name wasn’t immediately familiar to me, his work certainly was. The Tel Aviv-based Bejach has been racking up awards for decades, most recently for Navot Papushado and Aharon Keshales’s Big Bad Wolves, and for Samuel Maoz’s Lebanon before that. He was in Poland representing one of my favorite documentaries of the year, Nadav Schirman’s real life spy thriller The Green Prince (which would be up for an Oscar if there were any justice in the Hollywood world). Since Bejach has worked in narrative and doc features, TV, commercials and music videos, I wondered if he had any advice for moving from short-form projects to feature-length work.

“If you are just making the transition to a narrative feature, try to pick up a good script,” Bejach suggested. “If it is easy to relate to the story, it will help you to bring yourself into the project. Most importantly, though, shoot the project and not your show reel.” We then went on to chat about cameras; he’s been working with the ARRI ALEXA these days, though he added that he’s open to using whatever camera makes the most sense for a project. I asked about this year’s hottest hardware item at Camerimage. He replied that there really wasn’t any “next big thing” – though the ARRI 65 certainly caught his eye. What about his ultimate wish list? On that Bejach was more forthcoming. “I love the texture and the color palette of the ALEXA XT,” he enthused. “I also love the color and clarity of Ultra Prime lenses, the way they hold flares. The Angenieux Optimo Zoom lenses (15-40, 28-76, 45-120) would be on that list, too.”

Finally, I asked about the biggest tech mistake he ever made on a shoot. Surprisingly, what Bejach recalled wasn’t technical, but simply approaching a director in the wrong way at a first meeting: “The lesson I learned from that was to calculate your words and be very clear.” Which can go a long way off set as well.

Interestingly, my sole criticism of this flawlessly run fest has nothing to do with what showed onscreen. Along with Deschanel this edition’s honorees included Philip Kaufman, Alan Rickman, Stephen Daldry, Jonas Åkerlund, Kim Longinotto, editor Martin Walsh, and designer Jeannine Oppewall – who nabbed the awkwardly titled Award to Production Designer with Unique Visual Sensitivity. For those keeping tally like me, that’s five white men and two white women. (Tossing in Albert Hughes and Maryse Alberti – a talent wasted on Michael Apted’s Bending the Light, a tedious study of camera lens artisans, which played in the Documentary Special Screening section – as jury heads did little to mask the festival’s glaring lack of sensitivity to diversity.) With an overwhelmingly young, albeit Caucasian, audience equally split between guys and gals, this staid homogeneity also made little sense. So here’s hoping future editions of this otherwise welcoming celebration of visual artistry will add some shades of grey.