Adam Salky On His Sarah Silverman-Starring Sundance Addiction Drama, I Smile Back 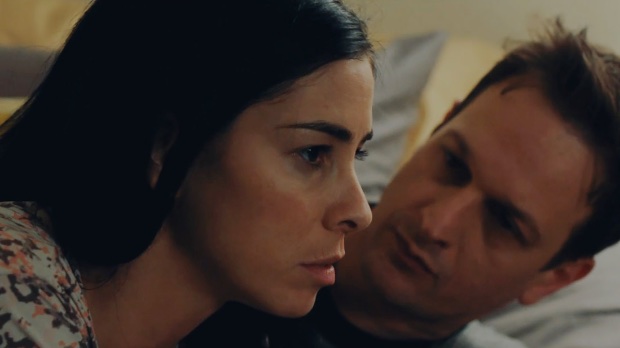 Based on Amy Koppelman’s book published by the independent press Two Dollar Radio — a book depicting the destructive despair of a housewife spiraling into drugs and bad sex — I Smile Back is being touted here at Sundance as the feature dramatic debut of Sarah Silverman, the comedian whose shocking riffs are always delivered with an unnerving sweetness and sexy demeanor. Attempting to channel — or perhaps remold — Silverman’s persona to the demands of the novel (adapted by Koppelman and Paige Dylan) is Adam Salky, who returns to Sundance following his debut picture, Dare.

I Smile Back premieres tonight in the Dramatic Competition of the Sundance Film Festival. Below we talk about what Salky learned from his filmmaking students, addiction movies and working with Silverman.

Filmmaker: Your film features Sarah Silverman in what is being called her dramatic debut. What are the challenges of directing someone with such a well-established persona, and how have you faced them? Have you tried to play into her existing persona, diverge from it, or neither?

Salky: Sarah is very intelligent and professional. She was incredibly prepared, and I worked with her as I would any other dramatic actress. The first time we met we started by really just talking about life, our experiences and what drew both of us to the project. We talked about the character in dramatic terms. We didn’t play into or diverge from a persona, it was just about realizing the character that Amy Koppelman created in her novel. As Sarah and I worked towards pre-production those conversations intensified. It was always about this woman, and what drives her. It was a great collaboration. On day one of the shoot Sarah showed up in character as Laney Brooks. It was a great moment on the set. Sarah’s committed, raw, and heartfelt work really inspired me and the crew and propelled the production forward.

Filmmaker: Following your first feature, Dare, which premiered at Sundance, you spent time making short-form, web-based work. Why did you focus on that work after Dare, and how has that work affected your development and realization of I Smile Back?

There’s also the reality that features take forever to get made, and very often they don’t get made at all. I was attached to a project for three years between Dare and I Smile Back and we just couldn’t get that damn thing together. In the meantime I made shorts because I wanted to keep exploring stories I wanted to tell and because I wanted to continue to hone my craft. For that matter, my teaching (I teach directing in USC’s Graduate School of Cinematic Arts) has deeply affected my development and the realization of I Smile Back. I spent four years working to help my students develop their stories/scripts, craft their shot plans and story boards, and create their edits. That constant focus on making movies, albeit the movies of my students, was crucial in making I Smile Back. I found that when we started pre-production not only was it like I had never left the world of filmmaking, it was like I had made dozens of films since Dare, and I was that much more ready to do it again.

Filmmaker: I Smile Back deals with the subject of addiction. How does your film slot into the genre of addiction films? What have you tried to do differently?

Salky: Laney, Sarah’s character, is an attractive, intelligent woman who is tormented by some very complex personal demons. The film is about how this character came to be emotionally and psychologically broken, and how hard it is for a person like that, particularly someone with as big a heart as Laney, to play a part in breaking other people.

Laney’s addictions in I Smile Back are really the result of these other deep emotional and psychological drives. It’s a part of how this woman acts out because of her own psychological trauma. To me that is in keeping with the reality of many people who struggle with addiction because it is so often intertwined with the psychological state of the individual.

Most of my cinematic inspirations for this film were not specifically addiction films. Films like Belle De Jour, The Celebration, Y Tu Mama Tambien. Movies about flawed, human people in extraordinary psychological situations. I really tried to just tell the story honestly and how I saw it, rather than trying to depart from a specific, pre-existing genre of film (as much as I do love a good addiction movie and I have a story about how I saw Trainspotting with my mother in the theater when I was 17 and it was very awkward).

Filmmaker: The script is credited to two first-time screenwriters. How did you collaborate with them, and what sorts of qualities did each bring to the process?

Salky: Amy, Paige and I had a very intense, very fruitful collaboration on this film. They worked hard, really hard on the script. Once I came on to direct they must have done a dozen drafts. It was incredible, fearless work. They really threw themselves into it. They were also on set for the whole shoot and were a wonderful resource. They are each very unique writers. Amy has a deep insight into the human condition. She knew this character so well and takes her through the novel and the screenplay to some wonderfully complicated places. Paige has a very contemporary, cool sensibility and a real fluency with dialogue. Amy bubbles with energy and engagement, and Paige is a little more quiet, and observant. They are a fun pair. Together they wrote a very modern portrait of a tormented, psychologically complex woman that really leapt off of the page for me.